Artists look beyond bars and borders at Coral Gables Museum 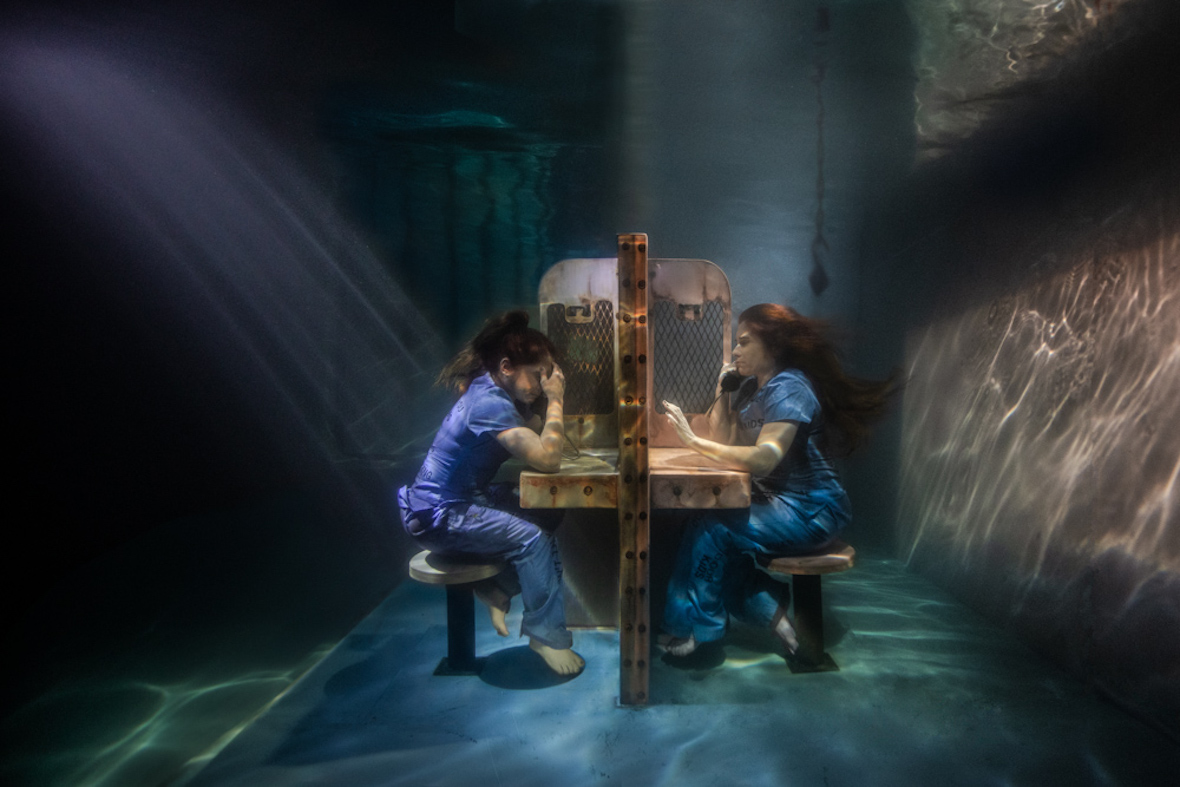 To produce “The Art of Compassion,” a heartfelt fusion of art and social change at the Coral Gables Museum, Starr Sariego gathered 20 fellow photographers — most of them local, some internationally known — and paired them with women just released from prison. She collaborated with the Miami-based Ladies Empowerment Action Program (LEAP), which provides instruction in life skills and entrepreneurship to incarcerated women preparing for transition. Upon release, graduates are greeted with transportation, a cell phone and other tangible necessities, plus employment and housing resources. And in this case, the women also met their volunteer photographers.

According to Sariego, recidivism among LEAP participants is lower than 5 percent after three years. The national failure rate for former convicts exceeds 70 percent.

“The Art of Compassion” presents photo portraits, audio commentaries and written testimonials that attest to broken family relationships, addiction and other misfortunes, while also celebrating triumphs over adversity. Liz, one of the project’s subjects, wrote, “Think what it’s like to live in a world where you divulge your life’s worst decision to everyone you meet.”

Branded with a scarlet “F,” felons consistently face mistrust and rejection. The exhibition raises questions of how society can improve their fate. More than second chances, many women — having suffered abuse when they were young — made one or more bad, life-shattering choices. Now, after paying dearly for those bad choices, they really need first chances. Sariego’s mission through this project is to help them overcome society’s biases and get on with their lives.

The women represent a diversity of age, race and demeanor.  Some, like Tarshea, photographed by CW Griffin, look poised and determined, aglow in tropical finery. Others, like Sariego’s model for “No Perfect People Allowed,” are more contemplative. The majority of the images and testimonials reveal gritty acceptance of past mistakes and firm commitment to persevere.  or the epitome of resolve, there’s Leesa Richards’ photo of Crystal.

Another subject, Rebecca, wrote, “God has truly taken my wrong choices and turned them into blessings. I am a dog trainer that specializes in breaking bad behavior. I love animals and I love giving back my training service dogs for wounded vets. 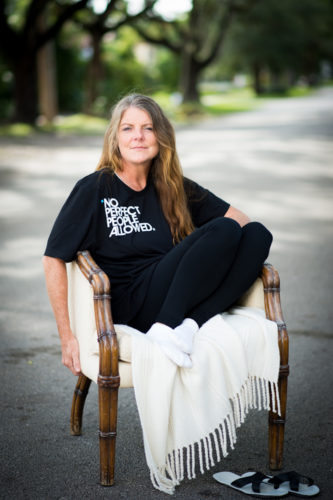 Photographer Starr Sariego’s “No Perfect People” is on view at the Coral Gables Museum as part of the exhibition “The Art of Compassion.” Image courtesy the artist and the museum.

“The Art of Compassion” isn’t all smiles, balloons and high-fives. Not everyone overcomes. One photo is dedicated in memoriam to Gina, who succumbed to a drug overdose. At least one subject is living on the streets.

Alexandra Vivas and her sculptor husband, Elio Diaz, collaborated to create an artistic tour de force. First, Diaz fabricated a gritty replica of a prison phone booth, fitted with two decrepit handsets and stools, separated by a glass pane. They submerged this prop in a swimming pool, and the brave portrait subject Christie dove repeatedly to model herself both free (engaged, hair streaming) and incarcerated (curled up, hair bound, hiding her face). The watery “prison” creates a dramatic setting for “The Last Conversation” photograph. The phone booth itself, streaming recorded messages through its handsets, commands the Abraham Gallery floor.

Sariego and her colleagues created this project out of goodwill and hope. Among her most fervent wishes is that visitors will overcome their bias and offer these women jobs — even just for a trial period. “They really want people in our community to welcome them back,” she says.

Numerous works hang dramatically from the Fewell gallery’s 20-foot ceiling, encouraging visitors to delicately navigate as if among spiderwebs. Maria Angelica Medina created her “Woven Conversations” project on the streets of Bogotá, speaking with passersby while knotting a tunnel-like net that’s suspended in multiple loops.

Aurora Molina’s “Geometric Cosmogonies” also involves social practice. It’s simultaneously a weaving demo and a contemporary exercise in trompe l’oeil. A traditional backstrap loom hangs vertically, its striped weaving incomplete. Sets of warp threads remain separated, and the shuttle is suspended in midflight. In a mischievous and loving tribute to handwork traditions of her collaborators at the Trama Textiles Coop in Guatemala, she has superimposed life-size hands, created in virtuosic stitchery, that are themselves stitching into the fabric. 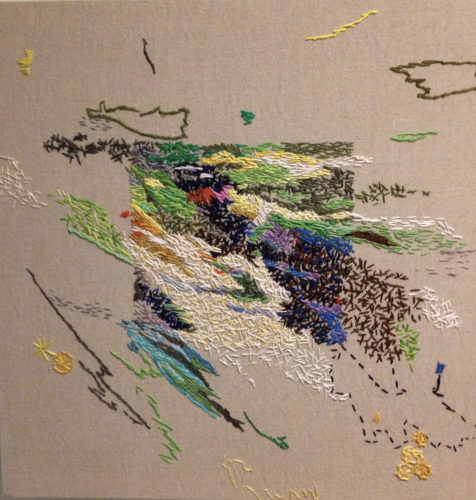 Pip Brant’s “Union Charge” is on view at the Coral Gables Museum as part of “America Weaves.” Image courtesy the artist and the museum.

In “Union Charge,” Pip Brant’s short, feverish strokes of yarn capture a detail within a frantic Civil War drama. She dismantles misguided, heroic depictions of warfare, rewriting history with the tools of its domestic victims.

Often, preconceptions shape perception. Frances Trombly’s “Leaning Canvas” spotlights assumptions about “blank” canvas, “waiting” to be painted on. Do we take the utilitarian canvas for granted, examine it for subtle interventions by the artist, or value its intrinsic beauty? Raquel Schwartz has audaciously knotted together thousands of feet of cassette tape to create a shimmering fabric that hangs from the wall like a luxurious gown, then flows onto the floor like a river.

Diminutive but potent, Gego’s pioneering 1978 sculpture has the tense agility of a family of acrobats. Using stainless-steel wire to draw in space, she fabricated structures that resemble organic webs and geometric matrixes. As Villalonga explains, “Gego created this work in Latin America at the same time her contemporaries were working with traditional techniques — but bringing them into the contemporary.”

That thread is unbroken. Fortunately, many of these artists are represented by Miami galleries.

Top photo: Alexandra Vivas’ “The Last Conversation” is featured in “The Art of Compassion.” Image courtesy the artist and the museum.

'Depth of Identity' at Green Space Miami, organized by Diaspora Vibe Cultural Arts Incubator, explores the impact and legacy of the African, Indo, and Caribbean diaspora in America and the hyphenated definition of race.
Continue Reading