Artists in Residence in Everglades summit contemplates art, diversity and the environment 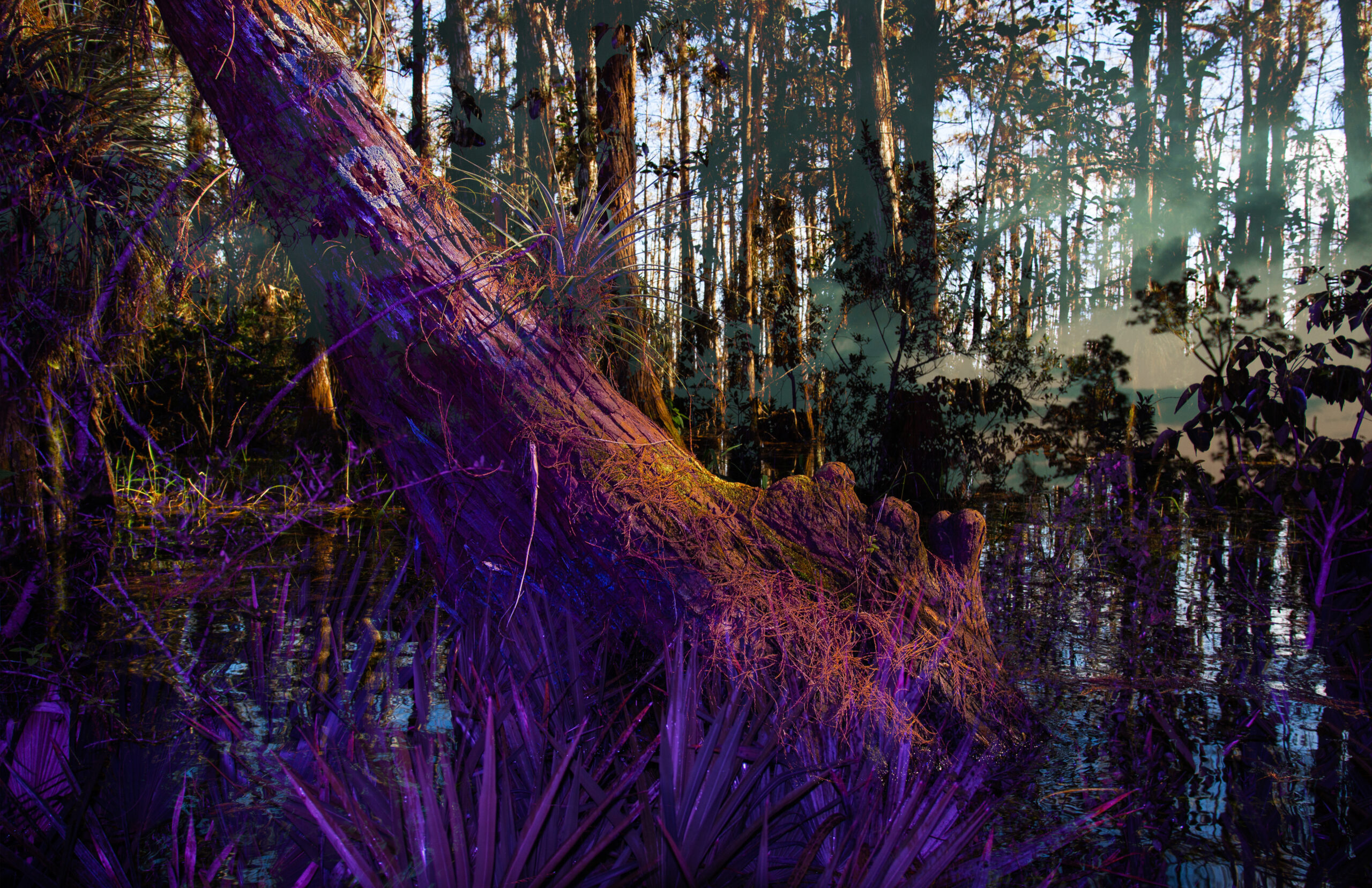 “Passages,” an immersive installation and soundscape, was created by Cornelius Tulloch and features the 2022 artists in residents in Everglades recipients. (Photo courtesy of AIRIE)

Amanda Williams uses color and her training in architecture to investigate issues related to race and the urban environment. 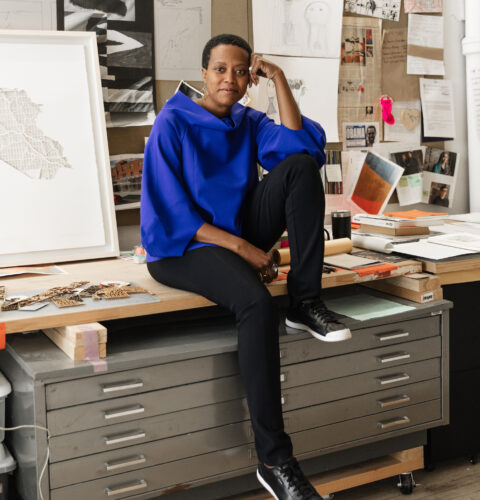 Amanda Williams, artist and architect, 2022 MacArthur Fellow, is one of the featured speakers at AIRIE’s Art and Environment Summit. (Photo courtesy of the MacArthur Foundation)

Williams crafted colors that resonated with the Black community and the palette of the neighborhoods she grew up in.

When asked in 2020 to participate on the National Advisory Council for AIRIE (Artists in Residence in Everglades) to reimagine the 21-year-old, non-profit Everglades residency program, Williams saw an opportunity in South Florida’s urban environments and the river of grass to increase diversity among the artists who are involved in AIRIE’S month-long immersions.

“AIRIE is finding new ways to reconceive the natural,” says Williams. “There is an ability to help people understand that you can’t stay stuck in the injustice, and this is especially hard for communities where that injustice is barely being acknowledged at all.”

She will be a key speaker during the Friday, Dec. 2 AIRIE Art and Environment Summit alongside Adam Ganuza, the chief of staff for the president’s office at the Knight Foundation, Alexander Cunningham Cameron, Cooper Hewitt curator and Hintz Secretarial Scholar, Tatiana Mouarbes of the Open Society Foundation, and Reverend Houston Cypress representing the Love the Everglades Movement.

Williams investigates the idea of land ownership and the question of who gets to own what and why. “Where’s the delineation of who owns this, and how is this based on those kinds of documents and policies which have had physical outcomes on the environment?” questions Williams. 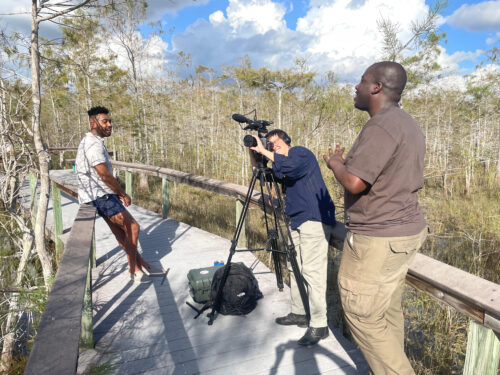 Cornelius Tulloch, right, directs filmmaker Alexa Caravia and AIRIE Fellow Kunya Rowley in the creation of a piece for “Passages.” In the immersive installation, Rowley performs a song he wrote that was inspired by his time as an AIRIE resident artist in the Everglades. (Photo courtesy of Meg Ojala)

When asked what role artists can play in defending environments such as the Everglades threatened by rising sea levels and global warming, Williams answers: “Yes, it (the Everglades) is probably going to go away, but how do we own the effort of making work that’s joyful right now and how does this empower us to act?”

She references Cornelius Tulloch, a Miami-based artist and 2022 AIRIE Fellow.

“For instance, Cornelius did this wonderful work of lighting at night that conveys the notion of the African Diaspora and people moving through this landscape (the Everglades).  It’s beautiful to look at but what it speaks to is extremely powerful,” says Williams referring to Tulloch’s immersive installation “Passages,” which forms the artistic focal point of the summit.

Tulloch, who grew up in South Florida, had only visited the Everglades once during a high school trip.  The AIRIE residency program allowed him to get to know the park and its rich history in a deeper way, he says.

The artist was especially inspired by the history of the Florida Highwaymen – a group of 26 mostly self-taught African-American painters who traveled the 95 corridor of Florida’s east coast during the Jim Crow period making a living from selling their paintings. 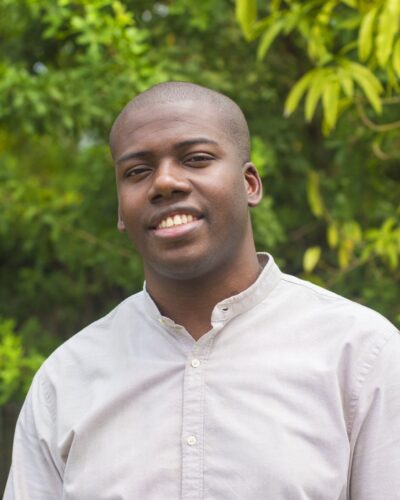 “These are hidden histories that we don’t think about all the time,” says Tulloch, “and these were artists who were not just thinking about ecology, but there is a lot of intersection of their narratives within the South Florida environment and a consciousness of the environment.”

Drawing inspiration from his Jamaican and African-American heritage, Tulloch’s work expresses how bodies exist between cultures, borders, and characteristics to create spatial impact.

His work has been exhibited widely including at The Kennedy Center for the Performing Arts, the Miami Pulse Art Fair, and the Museo Nazionale Delle Arti Del XXI Secolo in Rome. In 2016, Tulloch was named a Presidential Scholar in the Arts and, in 2020, the artist received the Ellies Creator Award from Oolite Arts. And recently was named an Emerging Visionary Grantee by Instagram and the Brooklyn Museum as part of its 2022 BlackVisionaries program.

Tulloch co-created “Passages” with the eight other 2022 AIRIE Fellows, who are artists working in a diverse array of mediums from sound to song and poetry, including Arsimmer McCoy, Francisco Masó, Kunya Rowley, M. Carmen Lane, Ania Freer, Lola Flash, Justin Matousek, and Alexa Caravia. According to ARIE, 225 applications were submitted for the nine Fellows spots for 2022. AIRIE’s selected fellows, as is the norm, received a $4,000 grant for a one-month residency in Everglades National Park and were provided housing and a stipend for the length of the residency. 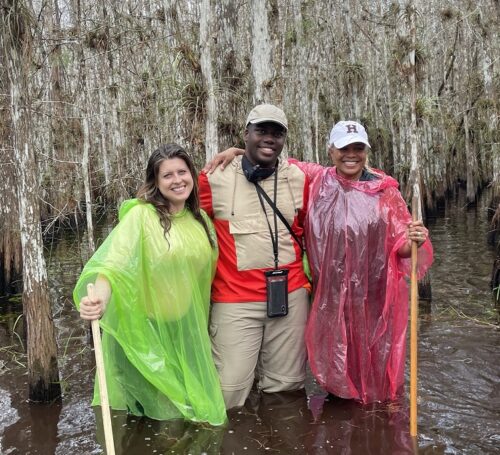 The summit represents AIRIE’s largest event to date and is its first Art and the Environment Summit.  “This is an opportunity to build a more inclusive community around the issue of environmental justice to convene leaders and highlight the stories and interpretations that artists like Cornelius are making with the Everglades,” according to Evette Alexander, AIRIE’s executive director.

Since 2021, almost 200 creatives from artists to writers to curators have been selected for AIRIE residencies.  “We curate our residency experience,” explains Alexander. “Artists go out with scientists, hydrologists and (experience) controlled burns, kayaking, slough slogs (wet hiking through the cypress domes). We really do immerse our artists in the landscape and their stores,” says Alexander.

WHAT: AIRIE (Artist in Residence in Everglades) Art Installation and Summit

COST:  The event and installation are free.  A separate RSVP and $10 donation is required for the 12:30 p.m. lunch.