Artists go ‘All In!’ for collaboration at freewheeling event 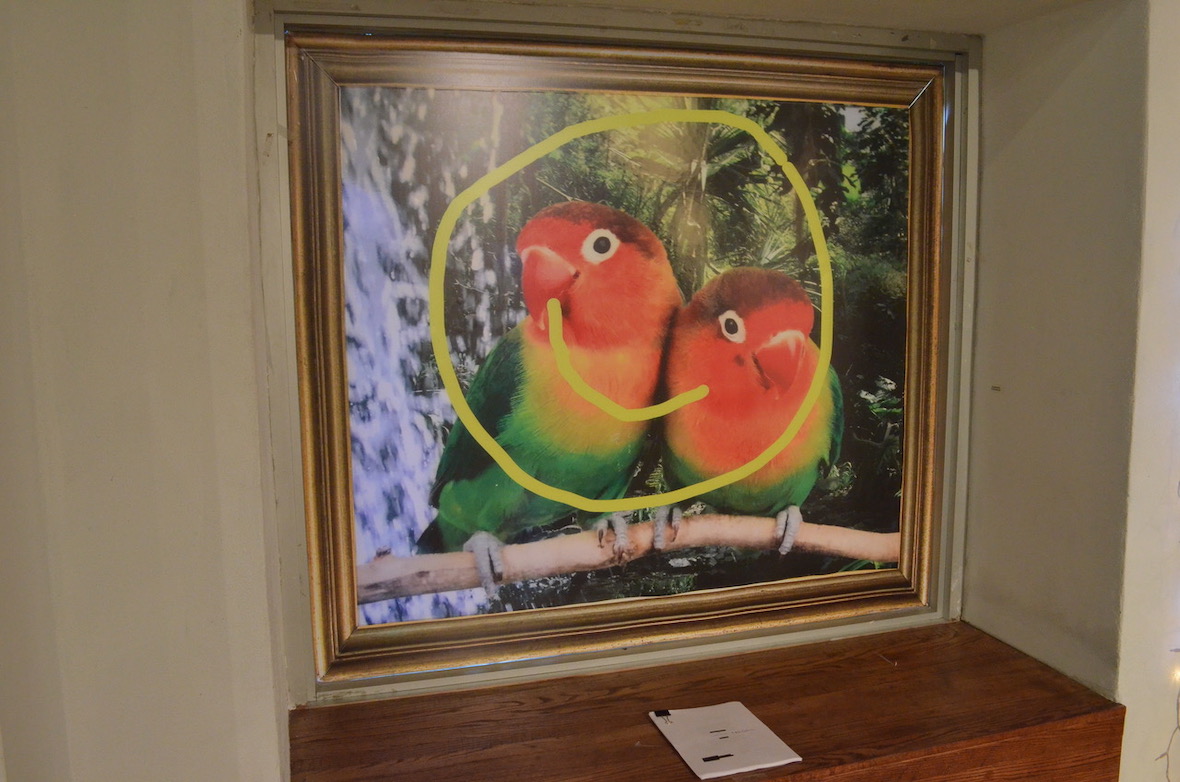 Justin Long’s days of innocence, growing up with his brother above their dad’s motorcycle shop on the Miami River, “were all about making our own things, fixing things up, whether a go-kart, a motorcycle, a bicycle, whatever,” he recalls. That adventurous, improvisatory spirit, years later, animates his artmaking and curatorial work. Freewheeling, collaborative experimentation is also the soul of “Collabo 6 All In!” a casual, one-night performance-exhibition project that returns Aug. 31 for its sixth iteration. Long is the curator — in a sense.

Initiated in 2005 by artists Bhakti Baxter and Jason Hedges as “Co-Operate,” the archetypal Miami-centric pop-up has a nomadic history, arising sporadically in sites around town.

Interviewed a month out, Long can’t provide many programming specifics. As usual, there’s no overlying theme. For months, he’s reached out — especially to prior participants, but also to students — to see who’s onboard. “If you were invited before, you’re on the list to be invited again,” he said. “It’s a really open process to whoever wants to be part of it.” Although about 80 artists have signed up, enrollment remains open.

Collaboration is the only rule. No soloists. “It creates these new partnerships,” Long said. For example, artists Allison Matterly and Jeffrey Noble formed “Nice ’n Easy” out of their 2015 collaboration, now producing public commissions in Wynwood, Miami Beach and Hollywood.

In 2015, after curating exhibitions at the storied Bakehouse Arts Complex for two years, and with the prior organizers’ blessing, Long understood he had carte blanche in reviewing “Collabo” proposals for a Bakehouse “Collabo 5.” Most projects were lighthearted. Asif Farooq, Hiroki Haraguchi and Andrew Nigon’s deconstructed piano, activated by three chickens scratching about in a pen and triggering electronic sensors, exemplifies that playful tone. By contrast, Randy Burman’s disdain for repressive, anti-democratic politics inspired his “Vent-o-matic.” Armed with old shoes, patrons bombarded 54 portraits of right-wing politicos the artist had painted and mounted on a chain-link fence. 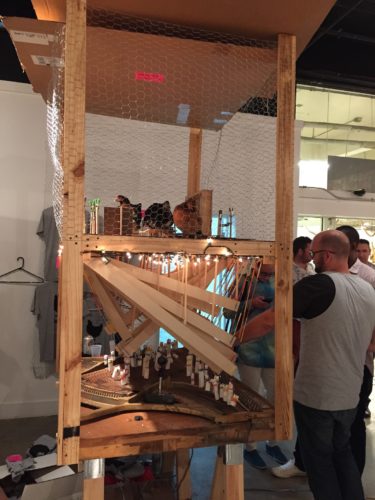 “I like just giving people opportunities to experiment and do things that they wouldn’t have the chance to do,” Long said. That means space and support in a no-stress environment. He acknowledges things got a little messy. There was confetti everywhere and holes in the walls. Also, Gustavo Oviedo’s burning paintings. And a couple of slip and falls due to a piece made of bath gel and shampoo. But everything’s cool. And this year’s event is in a new venue.

Several dozen “Collabo” prospects attended an Aug. 1 walk-through, where Bernard announced, “Anything you want, put your name on it, because the demo guy is coming on Monday to take everything out.” Artists high-fived, shared news, tagged display cases and other treasures and scoped out the spaces. But few were ready to provide teasers about their project plans. Frankie Cruz, known for creating indoor butterfly habitat/painting laboratories, insisted, “I’m not going to know until one day before the show.”

Carol Jazzar was more forthcoming. She, Douglas Hoekzema and Amanda Sanfilippo will create a 3D mandala “using foliage, fruit, vegetables … stuff from our yard,” she explained. On an adjacent wall, they’ll paint a night sky. A Bible text will read, “The kingdom of the Mother is spread upon the earth, but people do not see it.” Jazzar switched the gender from the original “Father,” because “the earth is female — at least for me.”

Bernard will partner with Laura Marsh, who creates ornate, multilayered fabric banners. He’s an electronics and sound artist and plans to embed a motion-activated sonic device in one of her pieces. “My part is going to be waving that flag around and chasing people,” he joked. “When they get really annoyed, I’ll pick someone else.”

Nick Ruiz and Juan González will transform a discarded Chinese-style, wooden headboard that Ruiz found into a freestanding sculpture. It will feature “grotesque little heads and different body parts that tend to be missing from older classical sculptures, noses and arms and things like that,” Ruiz said.

González is working on a foot — and maybe something else. “I’m working on a nose and a little head and a hand,” he said. 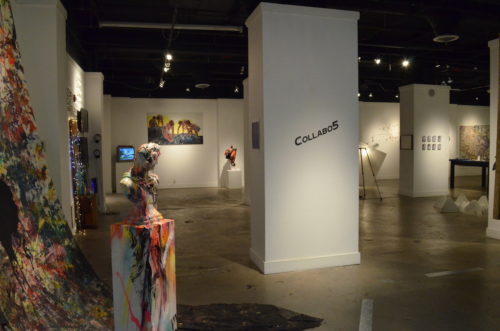 Approaching the building, Jenna Efrein declared, “I’m going to suspend plastic bottles to create an environment for people to pass through physically.” Her partner, Christin Paige Minnotte, will produce and project a video on the bottles “to create the illusion and sense of being in the ocean with a bunch of plastic in it,” she explained.

Mariana Smith and her partner, Juan Ledesma, have tentative ideas. But, she cautioned, “I don’t want to go too far in advance in planning. I want it to all kind of come to fruition with the energy of everybody over here trying to figuring out what we’re going to do.”

“We really don’t know until installation what we’re getting,” Long said. “It’s kind of a mad-dash scramble to put together a map, make those curatorial decisions about what needs to go next to what, and try not to step on anyone’s toes.”

“Collabo 6 All In!” will take place 7-11:30 p.m. Aug. 31 at 141 E. Flagler St., in Miami. Admission is free. To participate, contact Justin Long at collabo6miami@gmail.com. More information on the event can be found on its Facebook page.