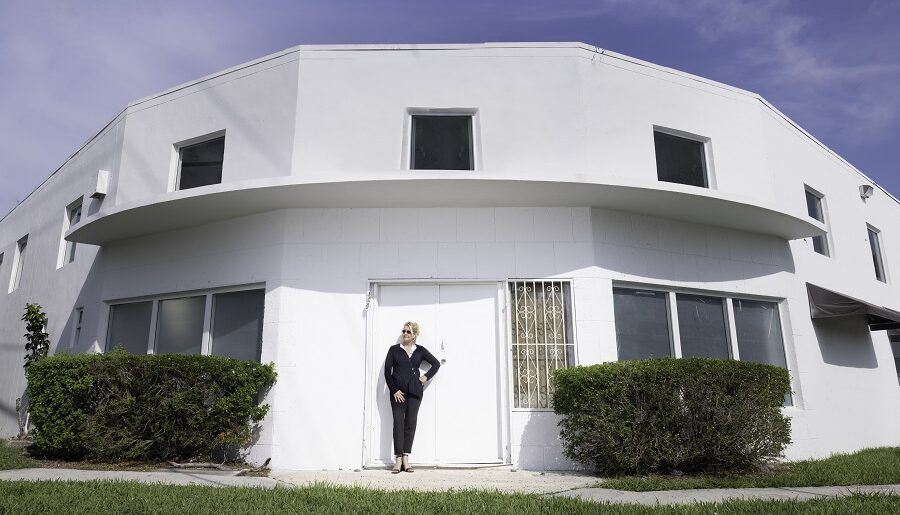 Executive Director Lorie Mertes stands in front of the new home of Locust Projects in Little River. The alternative art space will move from its Design District location in February 2023. (Photo courtesy of Pedro Wazzan)

The first exhibition for Miami’s Locust Projects, titled “Pigs and Lint,” was inspired by a discovery that Westen Charles, one of the alternative art spaces founders created after he was enlisted to fix his grandmother’s broken clothes dryer.

Miami’s longest-running nonprofit alternative art space is gearing up to celebrate its 25th anniversary in 2023. With a move to a larger space in the works for its silver jubilee which will begin a new chapter for the organization, something that will never disappear is why Charles, along with his cohorts, artists Brian Cooper, known as COOPER, and Elizabeth Withstandley began Locust Projects in the first place.

“Everywhere that we wanted to show in Miami would have never shown our art,” says Charles, a working artist who teaches fine art at Miami’s Design and Architecture Senior High School (DASH), and who still serves on Locust Projects board of directors. 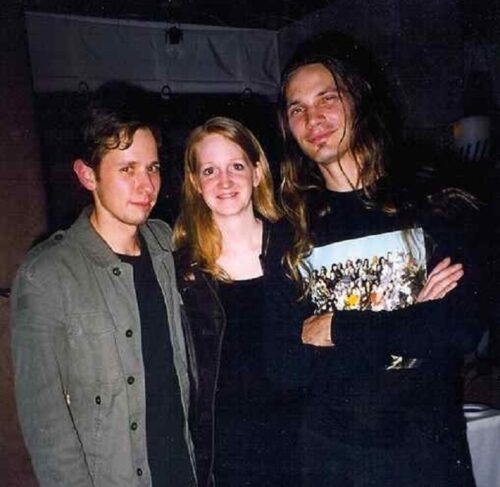 Since that 1999 inaugural show, which was inside a 3,500-square-foot dilapidated warehouse at 105 NW 23rd St., in Wynwood, which the trio rented for what Charles remembers to be about $600 a month, Locust Projects has remained an incubator of new art and ideas. The exhibition space is currently on North Miami Avenue in Miami’s Design District, a little over a mile from the original location.

In February of 2023, Locust Projects will move back to a warehouse, this time in Little River. The 8,000-square foot, open floor-plan space, at 297 NE 69th St., will double the size of its current location.

“It’s always been the idea of having a space to support artists in creating ambitious work in both scale and ideas and encouraging risk-taking and experimentation,” according to Lorie Mertes, who became the executive director of Locust Projects on, what she vividly remembers as “the eve of its 20th anniversary in 2018.” 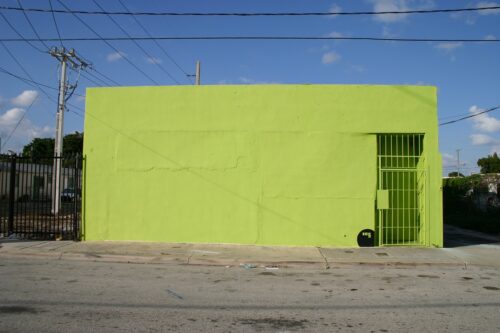 It was 1998 when the idea for Locust Projects began. Charles was enrolled in the University of Miami Master of Fine Arts program and still kept in touch with two of his classmates he became close to while an undergraduate at New York’s Pratt Institute. “I convinced them to come to Miami and we got a studio space together. (Wynwood) was a really dangerous neighborhood then. At the time we started there, we couldn’t imagine what it would become – the growth of the art world that would happen in Miami.”

He remembers the shows they produced of other artists were bringing people into the Wynwood warehouse. “There was a desire for art then. These were hardcore art people that were coming in. They weren’t socialites that were trying to keep up with anything. They were just people that liked art,” Charles recalls.

Two of those people who “liked art” were collectors Dennis and Debra Scholl, change agents who saw a future for Locust Projects. “It wasn’t our interest to become professional, to get professional gallery managers. We were artists,” says Charles. “We wound up meeting Dennis and Debra.” Charles confides that he told Dennis that he wasn’t sure how much longer the trio could keep Locust Projects afloat. “We got to the point where we were going to have to shut down. We couldn’t afford it anymore,” Charles says, adding that it was also taking time away from the trio’s own artistic practices.

Like it was yesterday, he remembers Dennis telling him: ” ‘You can’t stop. You have to keep going. I’ll show you how to do it to where it can be sustainable, and where you don’t have to do everything yourself.’ ”

Charles says the pair helped them form a board of directors and apply to become a not-for-profit 501c3. They sought out and got grants and, in 2006, they hired a full-time director.

Dennis became the founding board chair. For the last 14 years, Debra has been the board chair. 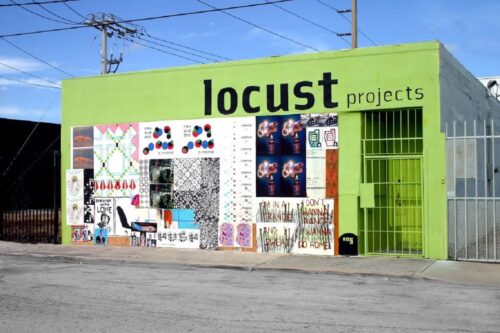 “We would go to Locust exhibitions when they were in Wynwood,” Debra recalls. “The three artists that founded Locust had days jobs and they were working artists, but they wanted to do something for the arts community where they allowed an artist to come in and make whatever that person wanted without worrying about having it financed or making something for someone to purchase,” she says.

Debra says she and her husband “loved” the idea of the freedom that Locust Projects gave to artists to experiment.

“Now, 25 years later, our intent is the same and even though we’re getting a larger space, it will just allow us to let artists do even more with their practice. I can’t speak for every artist, but I think it is a place that really excites and invigorates them to continue to try different things. That’s the core of Locust Projects,” says Debra.

The new space with its 17-foot-high ceilings and access to an outdoor courtyard will allow more “room for artists to roam,” says Mertes.

One of the most confining hindrances in the current Design District location, she says, is that the size of the space has kept public gatherings small, and interactions limited. The executive director would like for people to see what is happening inside Locust Projects and to be part of the process.

“This move enables us to do that and to invite the public – to have them be involved in a more significant, hopefully, impactful way,” says Mertes. 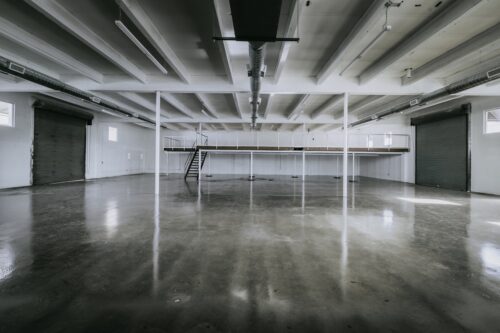 While Locust Projects has plans to purchase an exhibition space of its own one day, the new location in Little River is a five-year lease with an option to renew for an additional five years. A John S. and James L. Knight Foundation grant in 2019 was “a transformative $1 million spread over five years,” says Mertes, strengthening the organization’s focus on “space, people, and programming.”

Locust Projects Board Member Diane “Dede” Moss made a matching leadership grant towards the move to the new space, according to Mertes, adding that it is meant to be a catalyst for launching a 25th Anniversary Campaign over the next year.

“We are here for the artists and the public’s good, which means that we remain free of charge. In terms of funding, that will always be part of the core value of the organization to make sure that we are accessible, equitable, and inclusive,” says Mertes.

Locust Projects will continue exhibitions in its Design District space with new exhibitions opening Nov. 19 and running through Feb. 4.: Ronny Quevedo: “ule ole allez” and T. Ellion Mansa, “Room for the living/Room for the dead.”

Currently, three exhibitions are on display through Nov. 5.