‘Aerial Vision’ at Wolfsonian-FIU coming to a close 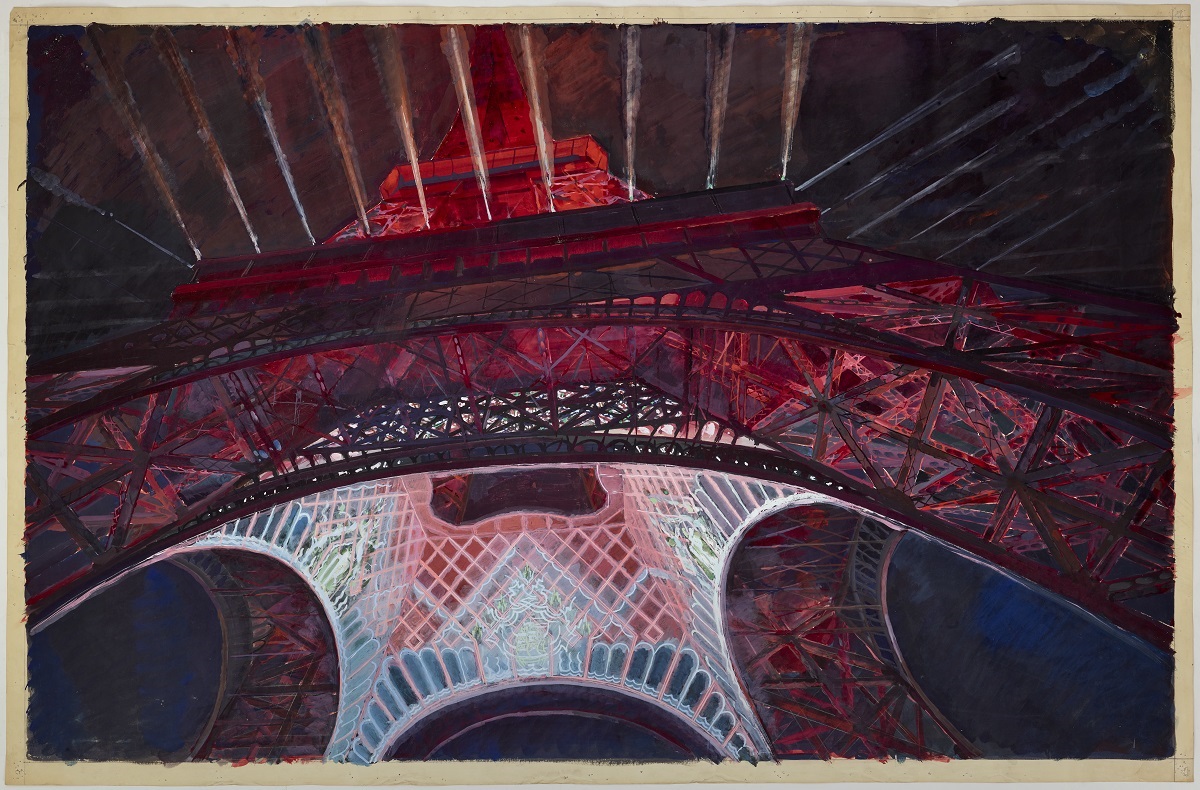 The Eiffel Tower, created for the 1889 Paris Exposition Universelle, was the tallest structure in the world at one point. This drawing study from 1937 is by Andre Grenet, who was married to the granddaughter of Gustave Eiffel. (Photo/Lynton Gardiner)

“Aerial Vision” at The Wolfsonian-FIU in Miami Beach is all about point of view.

Or, as curator Lea Nickless puts it, “how you look at things from different perspectives and how that has an impact…

“The idea of the exhibition is how the early 20th-century technologies of skyscrapers and airplanes provided a previously unavailable platform to see and interpret the world.”

On display through April 24, the exhibition utilizes paintings, prints, drawings, magazine covers, postcards, sheet music, collector plates and other objects to show how these inventions gave birth to a new era that was born practically overnight. 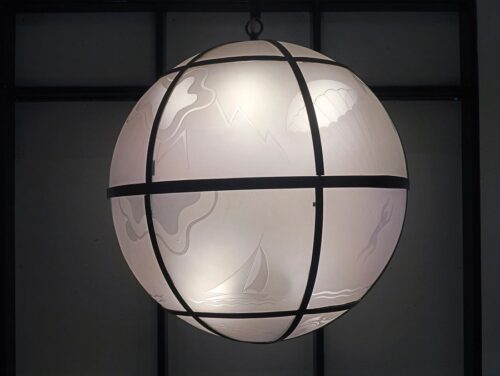 A chandelier (1937) by architect Kjell Westin for The Norma Restaurant in Stockholm, Sweden, has transportation images etched in glass. (Photo/Lynton Gardiner)

“This new view affected everyone … artists, architects, urban planners and designers,” Nickless says, adding that it sparked creativity and introduced novel approaches for living, working and traveling. “Everything in the exhibition is a result of an interpretation of this new view by a visual thinker.”

In effect, the exhibition is a result of Nickless’ ever-evolving views of the pieces in The Wolfsonian collection, which she says today numbers 200,000 items and counting. It’s not a stretch to say that Nickless has an encyclopedic knowledge of the collection. She began working as an assistant at Mitchell “Micky” Wolfson Jr.’s first gallery in 1984, at what was then known as Miami Dade Community College.

“It was called the Mitchell Wolfson Jr. Collection of Decorative and Propaganda Arts,” she says.

In 1997, Wolfson gifted his Mediterranean Revival-style Washington Storage Co. building on Washington Avenue to Florida International University. The gift included about 70,000 items, which Wolfson had amassed from his expeditions throughout the world. There’s also a library with about 50,000 rare books, periodicals and other reference materials. 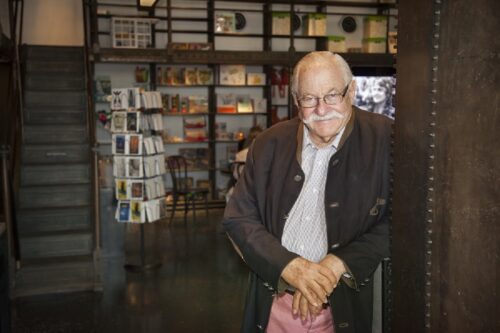 Many times through the years, Nickless says she kept encountering items from The Wolfsonian’s collection that reflected a point of view, such as classic airline posters that showed the view from above and other pieces with a perspective from below.

“Suddenly you are looking at the world in a different way,” Nickless says.

In tandem with how Wolfson himself views his objects – he’s interested in what he says is the “narration of the pieces” he collects, not just the individual items – Nickless kept returning to the concept of creating a perspectives exhibition.

Together with Richard Miltner, exhibition designer at The Wolfsonian, they arranged approximately 165 works from the collection into nine chapters: Aerial Art, The Sky’s the Limit, Urban Heights, Selling the View, Portraits of Power, Every Roof an Airport, Heightened Anxiety, A New Domain, and Free Falling. 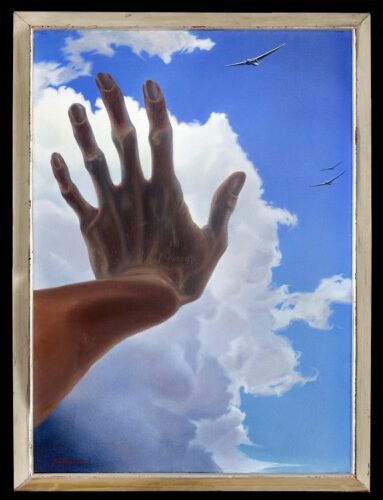 “Aerial Vision” pays close attention to detail including Miltner’s design of the space.

“For me, I like to say it’s not about my design, but looking at the objects and interpreting it that way,” Miltner says. “I did pick up on how there are specific shapes that are used [in the works], such as the architecture.”

The exhibition showcases some of The Wolfsonian’s one-of-a-kinds, including Art Deco bronze elevator doors from a Boston hotel circa 1929; a copper spire from the 29th floor of The Woolworth Building, which was the world’s tallest skyscraper from 1913 to 1930; an oversized beer glass with skyscraper imagery promoting Ohio’s tallest glass of beer; and two realty-scape paintings, one of which was commissioned by the Greater Miami Development Co. to promote land sales in South Florida.

One of the most important pieces, Nickless says, is a 14-foot-tall watercolor rendering, circa 1929, of The Waldorf-Astoria Hotel: “We have never shown it before because of its dimensionality.” 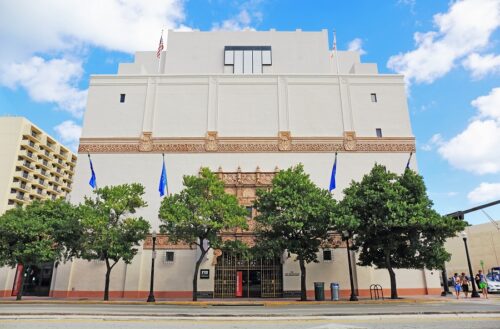 The exterior of The Wolfsonian-FIU, in the building that formerly housed the Washington Storage Co. (Photo/Lynton Gardiner)

Almost 100 percent of the pieces are from Wolfson’s collection. (At age 82, he says he continues to collect every day and has no intention of stopping.)

Three pieces are from Wolfsonian staff members who are also collectors: two vintage photographs of Miami by Richard B. Hoit from development director Michael Hughes; and an 1955 aerial map of Miami and Miami Beach from accounting coordinator Larry Wiggins.

Selecting the pieces for “Aerial Vision” was a difficult task, Nickless says, and the exhibit features just half of what was on her original checklist because of space constraints, among other issues.

“The material is rich and deep. There is so much,” she says.

With expansion plans underway at The Wolfsonian, there would eventually be triple the space to show off the massive and continually growing collection. The new space is expected to add 35,000 square feet by late 2026 or early 2027, according to Casey Steadman, director of The Wolfsonian-FIU.

More space means more opportunities to display what’s now kept in storage as well as any of Wolfson’s new finds – pieces that he says “each are a part of a great chapter in this book of objects.”

COST: $12 for general admission; $8 for seniors, students with ID, and children age 6-18; and free for Florida residents and students, faculty and staff of the State University System of Florida. Free Fridays weekly from 6-9 p.m.