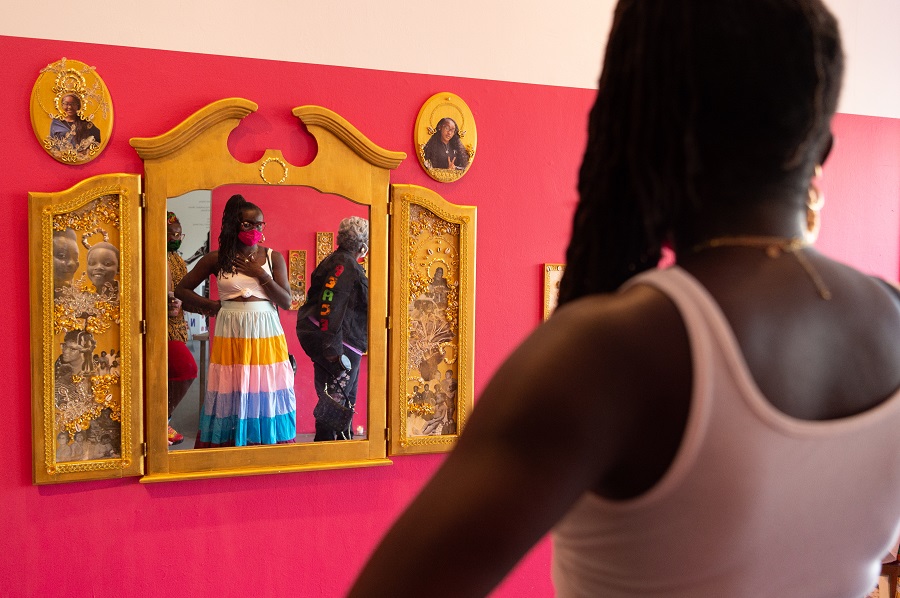 Three artists from different walks of life — and perspectives and geographic locations — now have their installations inside the exhibition space at Miami Design District’s Locust Projects. And while it was entirely unplanned, the works by Miami’s Loni Johnson, New York’s Jessica Segall and Philadelphia’s Lewis Colburn come together with a common through line: that the existential crossroad which humanity is facing is at a tipping point.

For the three artists, there’s an urgent necessity for exploration and conversation.

“The artists are all responding to the current moment — from climate change to the rise of authoritarianism to the silencing of the voices of Black girls and women,” says Locust Projects executive director Lorie Mertes, about the three installations that are on display through Saturday, Nov. 6, 2021.

Johnson’s “Remnants” appears first inside the gallery, tucked in what is known as the Mobile Studio, a storefront area to the right of Locust Projects’ main lobby. The area has been painted two shades of pink for Johnson’s exhibition — colors the artist remembers from her grandmother’s home. There are intricate wall hangings and Santeria-inspired altars set up in the space, as well as collages where images of Black women and girls are embellished with shells, beads and gold jewelry. 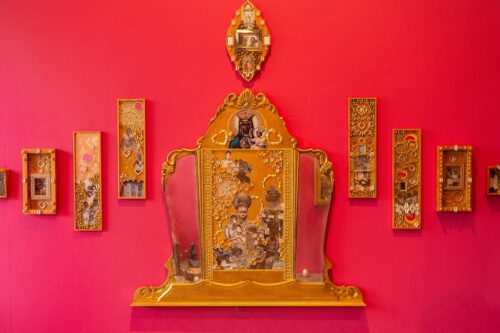 Santeria-inspired altars are set up in the space for Loni Johnson’s “Remnants.” (Photo courtesy of World Red Eye)

“The altars are a visual installation. This is as much installation as what’s in churches. Churches were the first places for installation art. People were surrounded by the visuals that were meant to inform reverence to religions,” Mertes says during a walkthrough of the space, adding that the storefront area allows the works to be seen from the outside. It suggests the front of a botánica, well known in the Afro-Latino cultures, she says.

For Johnson, the ability to view the installation from both inside and outside has multiple meanings.

“[It] introduces and invites those that usually don’t have access to these kinds of spaces, having them enter and then allowing that space to speak to them and speak for them,” Johnson says. “[It becomes] a place for them to see themselves in, and that is really the intention with this exhibition and my work in general.”

Art museums and exhibition spaces historically have been considered out of reach for people of color, either because of economic reasons or geographic locations or limited representation of non-white audiences. Johnson says the photographs in her installation showcase Black women and girls who are hardly represented, who don’t have access to nor have a history of being welcomed into what are perceived as spaces that represent a different class structure.

“This is an entry point that doesn’t happen a lot in the art world,” she says.

There are historical images of women in her family, her great-grandmothers, their siblings, and photos that include Johnson accompanying them. Her work, she explains, “brings them with me and presents this idea of how they informed me. Maybe then I can inform others to be aware of how we acknowledge our ancestors when we introduce them into these spaces.” 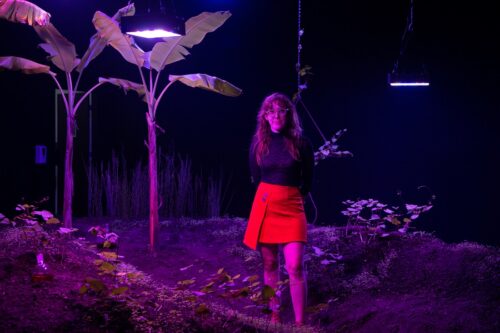 In the main gallery of Locust Projects, it’s a different golden experience, much darker and less obvious in its message. Segall’s “Reverse Alchemy on the Gold Coast” takes on the harm done to the ecosystem from gold mining.

Visitors enter through a black curtain that separates the front of the exhibition area and the main space. Mounds and mounds of dirt (21 square yards, to be exact) act as the foundation for plants in what resembles a grow house. There’s much to take in. The centerpiece is a gold-fed garden that uses a reverse-engineering process to irrigate Florida native plants with a diluted gold solution.

“I’m interested in transformation and process,” Segall says. “All of my work has some kind of process where there is a material change usually happening within it or an energy exchange.”

Through the gold-mining process, harsh chemicals such as cyanide and mercury are used to bleach it out therefore it contaminates water supplies: “This work takes it one step further toward absurdity by saying, ‘Let’s put the gold back in the ground,’ ” she says.

She was influenced by the notion that gold represents power and, in breaking down the gold to its original form, creates a statement on its status.

“This speaks to not just the gold itself but to the power structures that surround it. Seeing gold transformed from this incredible symbol of power to nothingness, that’s something that I wanted to portray,” Segall says.

While researching contamination caused by gold mining, she spent time in a gold mine with Peruvian environmentalist Maxima Acuña, who is known for her resistance against the mining industry that wanted to cultivate her land.

“It made a powerful impression,” Segall says.

The “Reverse Alchemy” installation features video projections filmed during her reverse-engineering process, in which U.S. Mint gold coins were dissolved into a gold solution and then diluted into the water that irrigates the plants.

Segall says she discovered an interesting dichotomy between her work and Johnson’s “Remnants” installation just a few feet away: “Loni works with gold in a metaphorical sense of value, and it is compelling to put the two together because we are coming from such oppositive perspectives.”

In the back of the exhibition space is the Project Room, where Colburn’s “A Fountain for a Dark Future” is a stark contrast visually to the darkness of “Alchemy” preceding it. 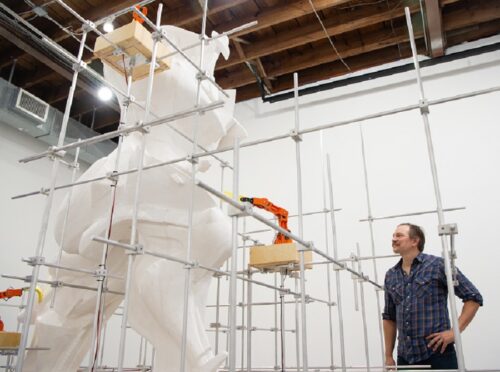 Open the door to the room of vivid white walls and see a bright-white, 8-foot-tall sculpture that consumes the space. The sculpture is “protected” by aluminum rods, while automated robot arms with small brushes attached continually clean it. At the bottom, a large tray is continually filled with water, a commentary on the impact of rising sea levels on Miami and its people.

The work shares a laundry list of problems, including workers being replaced by automation, and water rising around places that people live because of climate shifts. But there’s irony and humor, too.

“A Fountain for a Dark Future” resembles a blurred figure in motion while its feet rest in plastic trays through which water circulates. It is a recreation of Italian Futurist Umberto Boccioni’s iconic sculpture, “Unique Forms of Continuity in Space” from 1913. Colburn says in his artist statement that he “re-creates sculptural forms of the past to interrogate the conditions of the present, examining the ways these artifacts reinforce and shape narratives that persist today.”

“This is my nod to the Futurists. They had some pretty troubling ideologies,” he says. “The fact that they, in the early 20th century, were so enamored with cars and machine guns and it translated into a wholesale embrace of violence … to me, that’s the same kind of wholesale charging forward [we see today] without any kind of critical sense in languages of tech and disruption.”

During a conversation from his home near Philadelphia, Colburn says the sculpture was entirely created onsite at Locust Projects for almost three weeks in August.

When it came time to actually physically build the piece, Colburn found that times had changed quite a bit since conception of “Fountain,” he says.

“I wrote the proposal for this work in the summer of 2019 and, at that point, I thought things were pretty bad in terms of the way the world was going, and then 2020 happened,” he says. “It was conceived with weighty issues in mind, and it could be focused on the doom and gloom. I do hope, though, that people leave with a sense of a certain hopefulness from seeing the piece, that there is change that we can realize, but that we have to think about all of these things.”