Yissy Garcia: The Girl is a Drummer and Boy, She Can Play 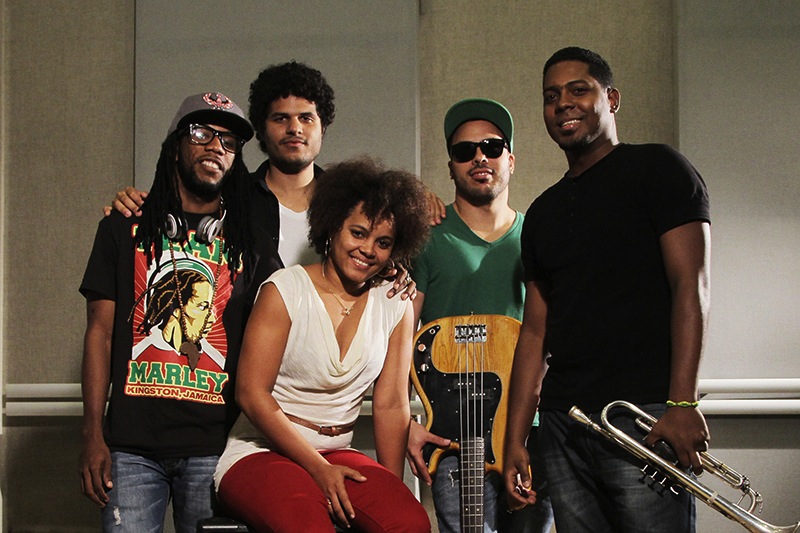 The daughter of Bernardo García, an influential drummer in Cuban music, charter member of the fabled Afro-Cuban jazz rock group Irakere and trumpeter Arturo Sandoval’s band, Yissy García was supposed to be a dancer, a ballerina. Her brother was the designated heir in the family. “They would take me to dance lessons and I’d go crying, all the way. I didn’t want to go. They would give the sticks to my brother,” recalls García, 27, with a sly smile at a lunch at Miami Light Project in Wynwood.

“Now my brother is a dancer, a choreographer, and me ….” As laughter erupted in the room, she didn’t need to finish the sentence. She is now a professional drummer, leading her own group, BandaAncha, a fascinating ensemble of Afro-Cuban jazz-funk that includes a deejay contributing an array of sounds and effects.

“Since I was in my mom’s belly I knew I was going to be a percussionist,” she says. “I would be going around the house beating my little drums and, at first, my parents thought it was just child’s play. But later they realized it was for real.”

Horacio “El Negro” Hernández, arguably the premier Cuban drummer of his generation, was at the lunch (he’s known García since she was a child and they are now planning a project together) and called her “the leading figure in modern Cuban drumming.”

García studied classic percussion since age 10 and at 15 she started playing the drum kit. She won a Special Award at Fiesta del Tambor competition (Drum Party, 2005), a Special Mention for Performance at the Festival Internacional de Jóvenes Jazzistas JOJAZZ (International Festival of Young Jazz Musicians, 2006), and was the runner up at the JOJAZZ competition in 2010.

She organized Yissy and BandAncha in 2012, and the group is completing its first album and on its first tour of the United States, coming to Miami this weekend thanks to presenters FUNDarte and Miami Light Project.

While there is a tradition of female groups in Cuban popular music, getting accepted as a female drummer in male-only groups must’ve taken some doing. How was that?

Actually, I liked the process of establishing myself in the world of professional musicians in Cuba a lot. Years ago I was much thinner, much smaller, and being a woman, many groups, especially those comprised just by men, didn’t consider me at all. I had friends who knew bands looking for drummers and when they recommended me, they were told things like ‘Yeah, but she’s a girl, I dunno.’ But that actually strengthen me. I always tell the story that in those days I kept a list of all those groups that said ‘no.’ and one by one I ended up crossing them off the list because I ended up playing with them.

How did you come up with the idea of mixing Afro-Cuban tradition, jazz, and turntables?

The idea comes from a video I saw of Herbie Hancock from a concert in 2002 with a deejay, and Terri Lyne Carrington. It really had a impact on me. When I saw that, I decided that that’s what I wanted to do. I loved to see the people at the concert dancing. That was terrific and that’s how the idea of having a deejay and using electronic sounds came about, but mixing it with our roots music: rumba, Afro-Cuban grooves.

As far as female drummers, there is by now a long list in pop and rock, but in jazz there are few notable names. Who were your influences?

When I started playing drums, which was because of the encouragement of Jorge Aragón, who is the keyboardist in my band and has been a jazz fan since he was a kid, I started listening to Dave Weckl, Vinnie Colaiuta, Dennis Chambers, Brian Blades. It’s funny, because as we learn we often start at the end and then we go back to the beginning, but that was the style we were playing at school at the time so those were the drummers I was listening to. It was later that they organized a jazz band [at the school] and I went back and started listening to guys like Buddy Rich, Elvin Jones, and Tony Williams. I’m always checking new drummers, especially the gospel drummers, then I make my own mix.

Jazz was once dance music and has sometimes suffered from being presented in very formal concert settings. You seem to want people to listen — but also dance.

The reason I put this band, this fusion, together is because I love to see people dancing, enjoying themselves and ignoring that chip that says that jazz is not for dancing.