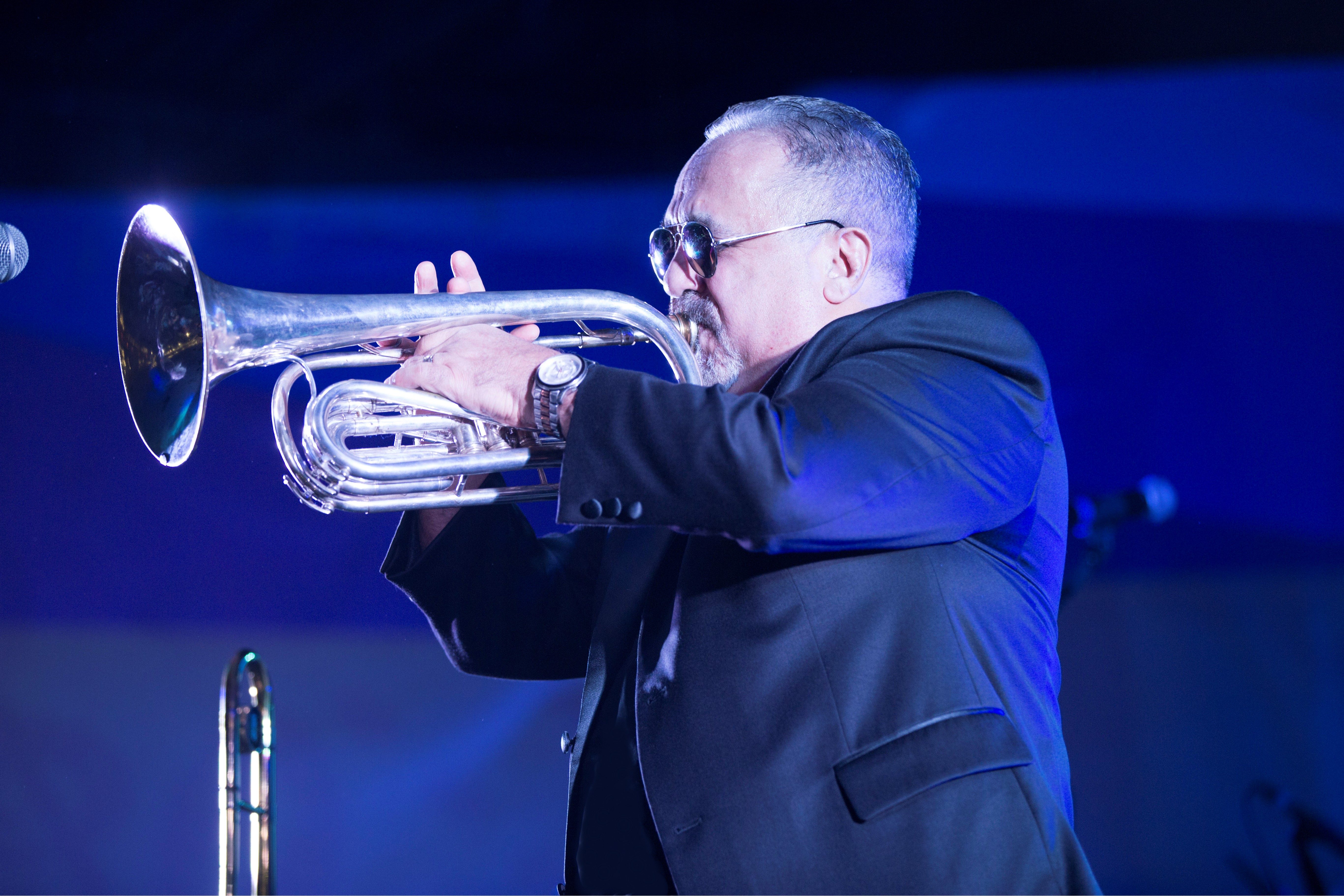 Long before there was gangsta rap, there was Willie Colón.

The trombonist, vocalist, composer and arranger was 17 when he recorded his first album “El Malo” (1967) on the legendary Fania Records label. “El Malo” was a surprise hit that sold more than 300,000 copies and launched Colón’s reputation as salsa’s bad boy. Actually, “El Malo” produced two bad boys. The other was a young singer who had recently arrived from Puerto Rico and barely spoke English – Hector Lavoe. Together, Colón and Lavoe became rising stars on New York’s salsa scene, creating a new sound that fused tropical dance and Latin American folk rhythms with urban music.

“The combination of my street stuff from the Bronx and Hector’s island thing was really appealing,” says Colón, who is set to perform Friday, Nov. 30 at the Fillmore Miami Beach, as part of his “Rumba del Siglo” (Jam of the Century) tour. The young musicians also played gangsters in their early albums – with Colón in the tough-guy leading role. In Cosa Nuestra” (1970), Colón is seen on the album cover pointing his black trombone case at a corpse bound and ready to be dumped in the Hudson River. In “La Gran Fuga” (The Big Break, 1971) his mugshot appears on an FBI Wanted poster. Other album titles include “The Hustler” (1968), “El Juicio” (The Trial, 1972), “Crime Pays” (1972) and “Lo Mato” (I’ll Kill Him, 1973). These albums have become cult classics for younger urban musicians like P. Diddy and Major Laz, who baptized Colón the “Original Gangster,” – a moniker he embraced and used as the theme of his 2008 recording, “OG.”

“That bad boy thing appealed to young, rebellious kids, although we were always tongue-in-cheek,” says Colón, who is 68 now and lives with his wife Julia in New Rochelle, N.Y. “We really didn’t mean it. We had stories to tell – about life in the ghetto,” he continues. “But it was [about things] like ‘Vicente el carterista’ [Vicente the purse snatcher] hiding in the garbage can. It was strangely funny, like fireside theater.”

Over the years, Colón has evolved from gangster to cop. When he’s not touring, he serves as a lieutenant sheriff in the Westchester County Police Department. “It’s something I always wanted to do… I’m probably the oldest guy to graduate from the police academy.”

But armed with a trombone (plus his lead vocals, explosive arrangements and a catalogue of hit songs), Colón can set any stage on fire. Last year, his 50th anniversary tour played to mostly sold-out venues in the U.S., Latin America, and Europe and his current tour is taking the same path, he says. “I’m grateful that at this age I can draw a crowd and people really have a good time and enjoy the music.”

Colón has enjoyed good times and success as a musician, composer, singer, arranger, producer, social activist and occasional actor. He holds a record in salsa with 40 productions and more than 30 million album sales and he’s recorded with the greats; notably Ruben Blades, Celia Cruz, Tito Puente and the iconic Lavoe (portrayed by Marc Anthony in the 2006 biopic movie “El Cantante”).

While he never crossed over into mainstream America, he is a legend to salsa lovers everywhere, with 2.1 million Twitter followers. In 2015, Billboard magazine named Colón one of the 30 most influential Latin Artists of All Time.

“That is such great achievement and a great compliment to be accepted [in Puerto Rico and Latin America],” says Colón, who early in his career made an effort to improve his oral and written Spanish. “I wanted to be a Latino. Being Nuyorican [a New Yorker of Puerto Rican descent] is a whole other thing you have to go through because they are rejected.”

Colón fought rejection and stigma from an early age. He was born and raised in a working-class Latino neighborhood in the South Bronx, the son of a heroin addict and a teenage mother. His saving grace was his Puerto Rican grandmother, Antonia, who raised him, instilling a love for island folk music and culture.

He also absorbed the music of other Latin American immigrants moving into the neighborhood – guaguancó, merengue, cumbia, tamborito – along with American jazz, soul, rock and funk. Music was his refuge from inner-city living.

“If there’s a constant noise going on, like on the subway, I can hear music in it … all kinds of noise and patterns,” Colón explains. “The wheels sound like drums, the squealing sometimes sounds like violins, some of the noises sound like a chorus. I do hear music in noise.”

On his 11th birthday, Antonia bought her grandson a trumpet from a nearby pawn shop. A neighbor, an African-American musician, taught the young Colón to read music and perfect his skills on the trumpet.

“I would practice all day, which would drive everybody crazy… By the time I got to junior high school, I was better than everyone else.”

Colón joined a group of street musicians who played for tips. One day, while performing outdoors, a nearby supermarket started playing a Joe Cotto band version of “Dolores La Pachangera” on loudspeakers. It featured Puerto Rican plena singer and composer Mon Rivera and trombonist Barry Rogers. For Colón, it was a life-changing moment.

“Mon Rivera was singing, and this trombone solo starts to roar on the record,” Colón recalls. “And when I heard it, I said, ‘I want to play that’. From that moment on I was not happy playing trumpet.”

Colón saved enough money to buy himself a valve trombone and started a band, La Dinámica, with a two-trombone horn section.

He also began following Rivera, the legendary plena musician who had formed a band called La Trombonga, with an all-trombone brass section.

“I was already 16 and old enough to go around the clubs, and I would hang around with my trombone and a long face until Mon gave me a break,” Colón recalls. “He would say ‘OK, come up’ and let me play with them. He used to call me ‘el americanito.’”

About a decade later, Colón was a successful musician when he tracked down the semi-retired Rivera, by then working as a refrigeration technician in Puerto Rico.

“I said to him, ‘I’m el americanito and I want you to come to New York and make a record with me.’”

Together, they produced one of Colón’s most seminal works “There Goes the Neighborhood” (1975, Vaya), still lauded for its sophisticated arrangements and fusing of salsa rhythms with traditional Puerto Rican plenas, coupled with Rivera’s distinct vocals and “trabalenguas” (tongue twisters) on plena classics like “Askarakatiskis.”

“I still run into people who rave about the record,” says Colón. “It wasn’t a blockbuster hit, but it had some solid sales. People accepted it.”

Fans accepted many other Colón experiments, like mixing Latin folk music with traditional Afro-Cuban rhythms and introducing social commentary in salsa songs. One of his biggest hits, “El Gran Varón” (“Top Secrets, 1989) tells the story of a Latino transvestite who dies from AIDS, alone and rejected. “There are things that have to be said.”

Even when he was Willie the gangster, he was really Colón the innovator and risk-taker.

Like his 1971 “Asalto Navideño” album, in which Colón layered salsa rhythms onto Puerto Rican folk plenas and aguinaldos (island Christmas songs). To get the sound right, he recruited veteran cuatro musician Yomo Toro, a virtuoso on the small 4-stringed guitar popular in Puerto Rican “jíbaro” or mountain music.

Colón found Toro one day while visiting his mother, who worked in a lingerie shop on 149th Street, in the Bronx. Colón noticed a sign in an adjacent bar with go-go dancers, announcing a Toro show there.

“I was peering through the window and got shooed away,” Colón says. “They thought I was looking at the go-go girls, but I was trying to find Yomo.”

He invited the cuatro player into Fania’s recording studio and the rest is salsa history. Asalto became one of the top-selling salsa albums of all times and Colón succeeded in making jíbaro music hip to young Latinos who generally viewed it as their grandparents’ music.

“Everybody thinks it’s “Siembra” [his 1978 collaborative album with Blades], but Asalto sells every Christmas, and the thing about it is that it broke a lot of barriers.” Colón has spent a lifetime breaking barriers.

in 1995, he became the first minority person to serve on the American Society of Composers, Authors and Publishers (ASCAP) National Board of Trustees. The International Trombone Association gave him a Lifetime Achievement Award for doing more to popularize the trombone than any musician since Tommy Dorsey.

He unsuccessfully ran in Democratic primaries twice – a congressional seat in 1994, and in 2001 for public advocate of New York City. His involvement in politics led to a job as an advisor to Mayor Bloomberg.

Colón now splits his time between touring, writing his memoirs and working on his production company and his label – Willie Colon Presenta. He’s encouraged that hip hop and alternative artists frequently sample his horn lines and music. He feels the timing may be right to get back into music production. “I’ve got something that I think is still valuable,” Colón says. “I’ve got some capital, maybe my concept of putting music together. I feel like I still got a lot of juice.”

And a whole lot of salsa.

Willie Colón performs at 8 p.m., Friday, Nov. 30 at the Fillmore Miami Beach at the Jackie Gleason Theater, 1700 Washington Ave., Miami Beach. Tickets are $58, $98, $128, plus service fees and can be purchased online at fillmoremb.com or livenation.com