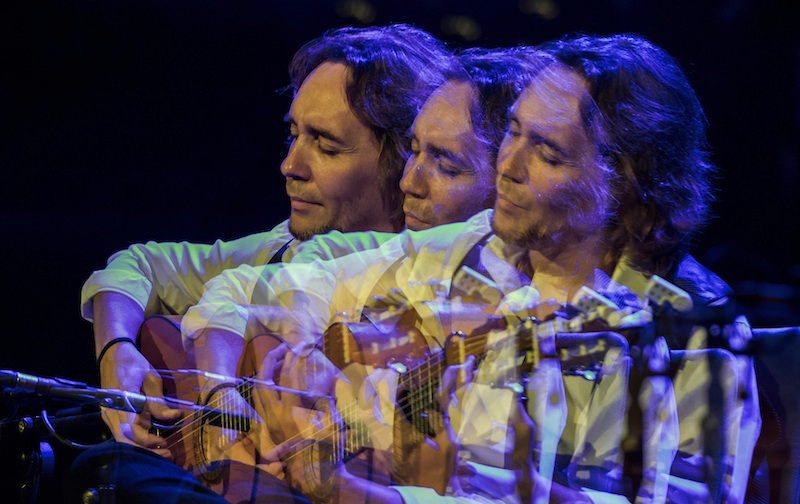 The role of guitar in flamenco evolved from modest accompaniment of singers in the latter part of the 19th century to solo concerts by the latter part of the 20th century. It took players such as Ramon Montoya (1880-1949), Niño Ricardo (1904-1972), Sabicas (1912-1990), and Paco de Lucía (1947-2014), who burst the dam for good by artfully experimenting with blues, jazz, and classical music, to expand the vocabulary and role of the guitar in flamenco.

Guitarist, composer, and producer Vicente Amigo is, arguably, a direct heir to that lineage.

An innovator born and raised in the tradition, Amigo, who is appearing at the Arsht Center as part of the Flamenco Festival, certainly has the technique, the sound, and a curious, expansive musical vision. And after all, this is the music of a people that, before settling in the South of Spain, crossed continents like a river, carrying with them the sediments of sounds and memories of every place they passed through.

Constant change and improbable mixes are part of flamenco’s DNA.

Born in Guadalcanal, a small town in the province of Seville, but raised in nearby Córdoba, where he currently lives, Amigo, who will be 49 on March 25, apprenticed and worked with guitarist Manolo Sanlúcar and collaborated with iconic flamenco artists such as singers Camarón de la Isla and Enrique Morente, who recorded some of his songs. Still, his musical curiosity and restlessness, which at times has gotten him in trouble with purists, have led him to probe the potential common ground of flamenco and jazz, classical music, pop, and even Brazilian music, collaborating with artists as disparate as John McLaughlin, Sting, Milton Nascimento, Alejandro Sanz and Algerian rai superstar Khaled.

His most recent recording, Tierra (2013), which he will present with his flamenco group at the Arsht on Wednesday March 2 features an intriguing fusion of flamenco and Celtic music. (Here is video of a live performance by Amigo, and the “Roma” a track from Tierra.)

In a recent conversation from his home, Amigo discussed fusion, the meaning of flamenco and his relationship with the great Paco de Lucía.

In Tierra you worked with Dire Straits keyboardist Guy Fletcher and featured members of Mark Knopfler’s band and the Scottish folk group Capercaillie. How did that collaboration came about?

Record companies are always asking their artists to work with this guy or that. It’s a bit of a fashion I guess, but I’m very weary of getting together with other musicians without being absolutely clear why. I knew I wanted to invite Mark Knopfler to collaborate on one piece, so with my manager we went to his concert, we met, it turned out he had some of my records and we talked about collaborating on one song. Then as the concert went along and I heard his Celtic musicians, I felt that my ideas could work perfectly with them, and that’s how Tierra started.

Why your interest in fusions? Where does that come from?

I’ve always been interested in blends. We ourselves are products of a mix of our father and our mother, how could we be against it? Besides, one of the wonders in music is that it is open-ended, infinite, and in the place you least expect it, you can find something that enriches you as a musician and as a person.

What does flamenco mean for you, then?

I come from flamenco, I have a great respect for flamenco and it would be probably impossible for me to leave flamenco. It’s a way to feel and it is rooted that deeply in me. But flamenco is just one of music’s children. Music and art are bigger than flamenco and what’s most important for me: expressing myself.

Every great flamenco guitarist seems to be saddled at some point with comparisons with the late Paco de Lucia. You have been too, of course, but perhaps few people know you were not only colleagues but compadres. Could you talk about your relationship with Paco?

Yes, Paco is the godfather of my little one, Marcos; and I am the godfather of his daughter Antonia. I mean, I play guitar because when I was three years old I saw Paco de Lucia on TV and it stayed with me. Later we became friends and shared many great times. For all flamencos, Paco is the greatest. He opened paths. He did so much for flamenco guitar that we are all indebted to him.