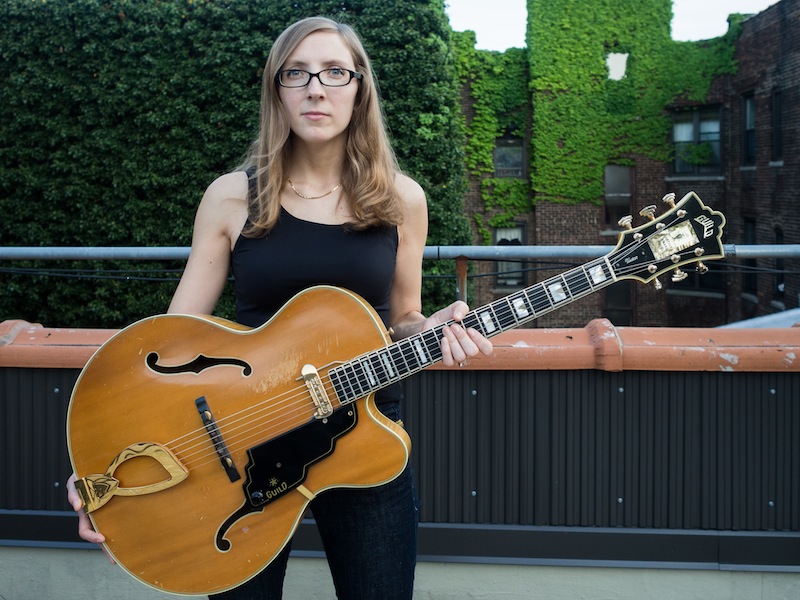 Variety is the spice of guitarist Mary Halvorson’s musical life.

Consider her taste in music. Asked what she’s listening to now, she reports having just gone through a “really heavy Elliott Smith phase,” referring to the late singer/songwriter with a dark bent best known for his Oscar nomination for “Miss Misery” in 1998 for the movie Good Will Hunting. She’s listening as well to the late jazz guitarist Johnny Smith; Pulitzer Prize-winning composer, saxophonist and flutist Henry Threadgill; the new record by the bassist Stephan Crump, a bandmate in one of the many ensembles of which she is part – and there’s the new Fiona Apple, which she likes a lot.“I go through so many phases,” she explains.

Halvorson is one of a growing number of women players in improvised music, in an arena that used to associate women mostly as vocalists. When she appears in Miami on Thursday, Oct. 27, as part of Tigertail Productions’ season, she expects to present a program “leaning toward more experimental forms of jazz, avant-garde jazz, and a lot of rock music influences.”

Her website lists the bands with which she’s involved; their names don’t fit on a single screen. They include Ingrid Laubrock’s Anti-House, the Tomeka Reed Quartet, and the Tom Rainey Trio. At avant-garde composer and saxophonist John Zorn’s upcoming Bagatelles marathon, she’ll lead her own quartet and perform with another led by pianist Kris Davis.

Halvorson, now a resident of Brooklyn, tours at a break-neck speed. She has performed in over 130 concerts just this past year in the United States and Europe, including at festivals. A glance at that prolific touring schedule reveals performances with a mind-boggling number of ensembles – quartets, octets, trios and more, some playing music described as avant-rock, or improvised, or jazz. So one wonders: when does she sleep? She laughs. “It’s actually not quite as crazy as it sounds. None of them are performing all the time.”

But Miami will get something even a little extra and different — it’ll just be her and her custom-built traveling guitar. “Playing solo is something I’ve only started doing in the past couple of years,” says Halvorson, who released “Meltframe,” her first solo album, last year.

“As part of my practice routine I’ll often work on jazz standards,” she explains. “As I was practicing that stuff without the intention of turning it into a performance, I started thinking about ways I could arrange these songs for solo guitar that might be different.”

This search for uniqueness is to be expected from one mentored by musical innovator and multi-instrumentalist Anthony Braxton, with whom Halvorson studied at Wesleyan University. She also has played in some of his ensembles, including his trio, septet, and 12+1tet.

“One thing that I really took from him was he would tell all his students, go out and make mistakes, really you can try anything, there’s no limit on what you can do musically.”

Braxton’s work challenges categorization, and some members of the jazz establishment have decreed it is not jazz. Halvorson also operates beyond the strictures of genre. An improviser, she does not call herself a jazz guitarist, though that’s what she studied in college and she is often referred to that way.

“I guess labels are complicated,” she says, adding that if her work had to be put under some large umbrella, jazz would probably be the closest.

“I guess I’m not too bothered whether it’s jazz or not.”

Whatever it is categorized, it will expose Miami to one of the most intriguing guitarists around today.