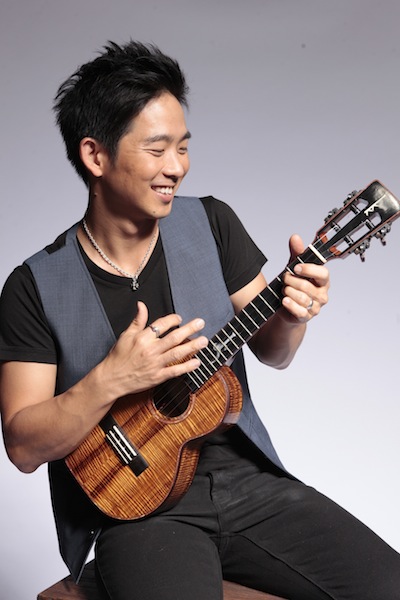 Jake Shimabukuro’s instrument is the ukulele, a version of the small lute first introduced to Hawaii by Portuguese immigrants in the 19th century, and which has become an iconic instrument of these Pacific islands. With the ukulele, Shimabukuro explores just about all the musical genres he can get his hands on, from Schubert to Hendrix, flamenco to fado, Chinese folk-music to pop classics. And, of course, it’s all infused with the rhythms and harmonies he grew up on in his native Hawaii.

Tigertail Productions is showcasing his unique sound this Saturday when he makes his Miami debut at the Miami-Dade County Auditorium.

The 39-yeard old was already celebrated for his virtuosity, invention and rapid strumming in his native state and Japan, when his rendition of the George Harrison’s classic “While My Guitar Gently Weeps” was posted on YouTube in 2006. It was one of the first YouTube viral sensations, and his star soared; he became a favorite on late night and morning television, and a documentary was made of him in 2012. Rolling Stone Magazine wrote of the ukulele innovator that “one of the hottest axemen of the past few years doesn’t actually play guitar.” Indeed, Tigertail’s John Kramel is a bit surprised that instead of the “gifted but relatively unknown artist that we booked, we are presenting a rock star.”

Shimabukuro has been playing the ukulele for as long as he can remember, literally. His mother was his teacher. “By the time I was four my parents had to take the ukulele away so that I would eat,” he says. “I was mesmerized by the sound.”

He still is. “The ukulele is such a humble instrument. It grew out of the machete that the Portuguese used to cut sugar cane in Hawaii. Four strings were added on, although granted it has evolved since then. But it is still all about those four strings. It has a small range but so much power. I love its simplicity. The very simplicity enables so much that I fear I may never discover it all.”

These days Shimabukuro concerts may range from predominately rock to downright symphonic. Recently he played a 30-minute ukulele concerto during the third movement of a contemporary classical work with the Hawaiian National Symphony. “Why not?” he asks.

Shimabukuro goes on to talk about his interest in interpreting Stravinsky and The Rite of Spring. “I take great joy in making such works more accessible. I think I may be able to introduce audiences in a new way to great works.”

Meshing seemingly disparate sounds and genres intrigues him. “I find myself more and more interested in unexpected pairings, mixing the familiar with unfamiliar rhythms and harmonies,” he continues. “Why shouldn’t Vivaldi’s the Four Seasons be paired with Hendrix’s ‘Purple Haze’?”

Not surprisingly then, Shimabukuro has worked on projects with Yo-Yo Ma. He has collaborated with country music man Lyle Lovett, banjo virtuoso Bela Fleck, and singers Bette Midler, Cindi Lauper and Ziggy Marley. The list goes on.

Saturday night’s Miami concert is an unexpected pairing as well. “I’m bringing an electric-bass player with me. There’s wonderful contrast with all the strings. The two instruments don’t get in each other’s way. They complete each other.”