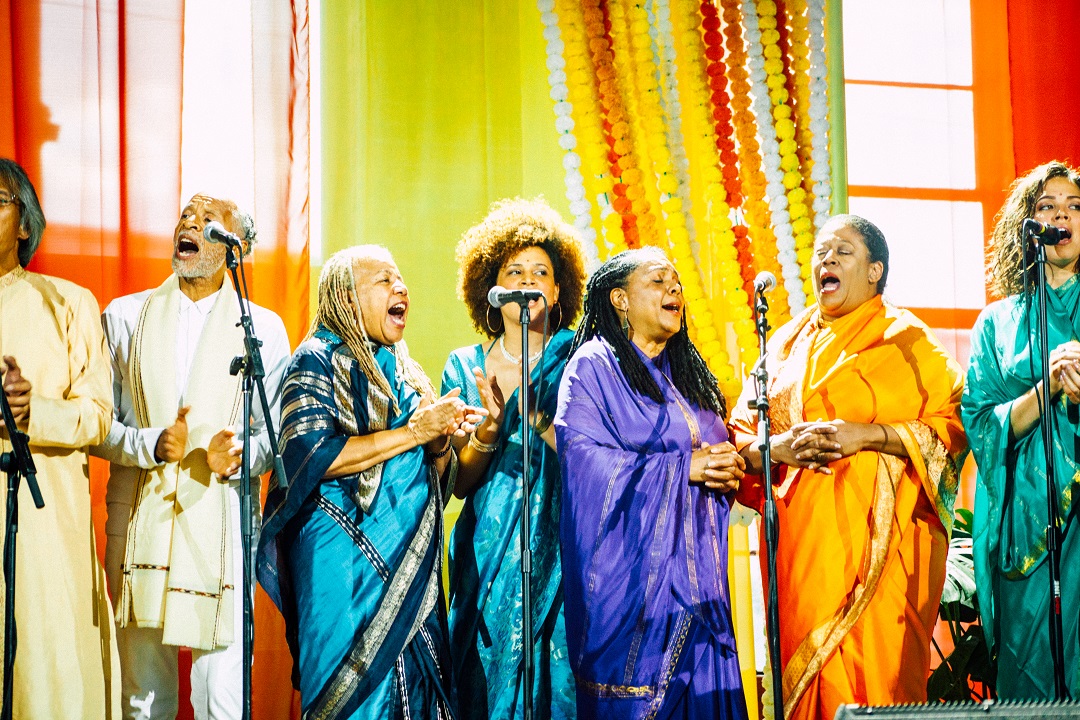 A single word conjures up a legend. But more recently that name has taken on new meaning as the music of John Coltrane’s late wife Alice comes into its own. On Friday the work she regarded as her most important will be performed at the Northbeach Bandshell, presented by Rhythm Foundation. This is actually sacred music, her arrangements of bhajans and Vedic devotional chants, for this show called “Alice Coltrane Turiyasangitananda: The Ashram Experience.”

Alice Coltrane has blasted past any expectations one might have about these chants. She reimagined them, blending in sounds more likely to come from the Afro-American Detroit churches she grew up in. Her arrangements are at times pure funk until the funk itself seems to become narrower and more breathless and other-worldly, then down it tumbles into pure funk once more. Likewise, the humidity, the drag and the longing of Delta blues weave all through the Vedic Music.

Her journey from her early days in Detroit has been remarkable.

Born into a musical family, Alice spent much of her adolescence playing organ and piano in accompaniment to the choirs of several of those Detroit churches.  But this was the early 1950s; jazz was a burgeoning musical force in town. Soon she was playing in local clubs as her reputation began to grow. Then came her years deep in the Paris jazz scene performing and developing her craft. Alice was still in her early 20s when she returned to the Motor City. At age 25 she first heard John Coltrane play. Within months, her playing had caught his attention. She was opening for him in his concerts. Within that same year they had become a couple.  Heady years followed for this was the era of Coltrane’s masterwork “Love Supreme.” With this album, Coltrane was announcing to the world that his music had become inseparable from his devotion to the Godhead. Alice’s music too had turned to these mysteries as the couple’s lives, their music, their commitment to sacred “path” further intertwined.

A handful of years after “Love Supreme,” Coltrane was dead.

It is fair to say Alice feared for her sanity for a time after his passing. Auditory hallucinations plagued her. She credits a meeting with Vedic Vaishnavism master-teacher Swami Satchidananda with grounding her once again. Alice began playing the harp that John had given her. It added a further ethereal dimension to the gorgeous albeit difficult jazz-work she had produced on the Warner Bros label in albums like ‘Ecstasy.”

She continued her communication with Swami Satchidananda and found her way to India to study with him. By the time she returned to Los Angeles in 1970 as an initiate into Vedic tradition, Alice Coltrane felt her path demanded a move far away from the world of commercial music, even jazz. She felt directed to open an ashram and seemed to disappear from any and all musical circles.

Few knew that she never wavered in her conviction that her music was her spiritual practice. There in the ashram, the community was singing her bhajans. Alice’s daughter Michelle, who grew up on the ashram, remembers those afternoons of call and response. “My mother would be at the organ or the synthesizer, and she would look up to catch someone’s eye. That was your cue to answer her call. She herself — her voice — had an extraordinary register. Wonderfully low. It was in that registry that she felt the spirit.”

Recordings of this music were made but were only available through the ashram.

After Alice’s death, the original tapes ended up in cold storage, literally. Still, word of it began to slowly spread until last year David Byrne’s Luaka Bop’s label initiated a World Spiritual Classics series. “The Ecstatic Music of Alice Coltrane” is its first release. The album was received by the jazz community in something close to awe.

Several of those who sang on the recording will sing again at the bandshell. Michelle Coltrane, a highly respected vocalist herself, will lead the group. Still, she is not entirely comfortable with the word “lead.” She refers to this Friday’s concert more as a spiritual ‘offering’ than a performance per se. Likewise, she sees these sacred songs as devotion that is very much alive. She hopes that anyone/everyone in the audience will add her/his voice to the joy.