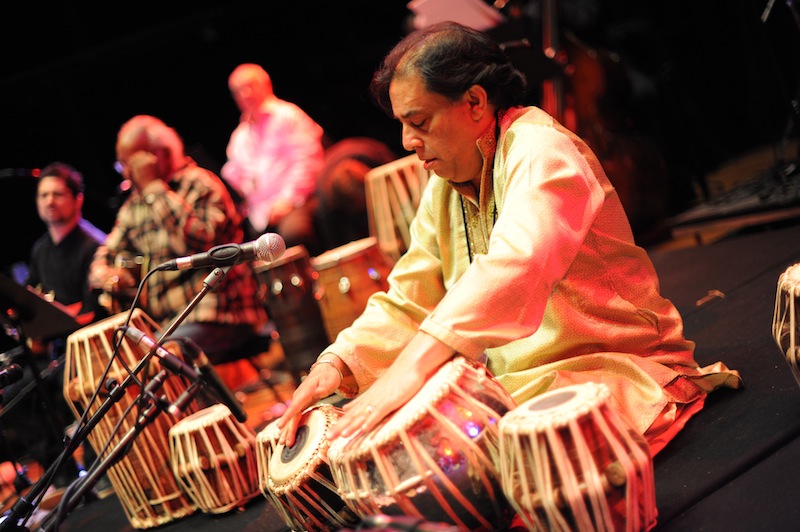 Globalization has produced many stories —not all inspiring. But having a Pakistani ensemble become a worldwide sensation by playing Paul Desmond’s immortal “Take Five,” which pianist Dave Brubeck turned into a hit nearly 50 years ago, has to be one of the most delightful and improbable.

The 10-piece Sachal Ensemble, a group from Lahore, Pakistan, is appearing at the Olympia Theater in downtown Miami on Saturday, opening MDC Live’s 2017-2018 season under the banner “Ojala/ Inshallah: Wishes from the Muslim World.”

The ensemble became an unlikely global sensation when the video of their performance of “Take Five,” a peculiar, swinging blend of South Asian classical music and jazz, got a million hits on YouTube. Brubeck got to hear it before his passing, in 2012, and wrote to producer Izzat Majeed: “This is the most interesting and different recording of ‘Take Five’ that I’ve ever heard. … Listening to this exotic version brings back wonderful memories of Pakistan where my Quartet played in 1958. East is East, and West is West, but through music the twain meet. Congratulations!”

The album that followed it, Sachal Jazz: Interpretations of Jazz Standards & Bossa Nova, became a best seller. That led to world tours, appearances at jazz festivals and a celebrated performance with Wynton Marsalis at Lincoln Center in 2013, captured in Song of Lahore, a documentary filmby two-time Academy Award-winning director Sharmeen Obaid-Chinoy and Andy Schocken.

“Izzat picked this music, which is familiar to global ears, because he wanted to popularize the genre, both in Pakistan and in the West,” explains Nur Fatima, the CEO of Sachal Studios. “The idea was that when the West hears the popular tunes they can relate to the songs but the sound, the instruments are different, and when the East hears it the tunes are somewhat familiar but they can connect with the sound, the instrumentation.”

An Oxford-educated economist, Majeed was in the 1980s an advisor to Saudi Arabia’s Minister of Petroleum & Mineral Resources and a hedge fund manager. He was born in Lahore, once a cosmopolitan cultural hub in South Asia and the center of Pakistan’s prolific film industry. His father was a music lover and composer, and Majeed grew up surrounded by music. He heard jazz for the first time when he was eight. At the time, the State Department was sponsoring Jazz Diplomacy tours by musicians such as Dizzy Gillespie, Miles Davis and Brubeck. His father took him to Brubeck’s performance in Lahore in 1958 and that music marked his life.

“I have never heard anything like it,” said Majeed, speaking from his home in Lahore. “I just fell in love with jazz. We had a few jazz records at home and it was all so different.”He recalled being 13 and going to the American library and getting “a lot of jazz music there.”

But the Lahore of Majeed’s childhood changed dramatically under the dictatorship of General Muhhamad Zia-ul-Haq — from July 1977 until his death, in 1988. Zia’s authoritarian Islamization of Pakistan, set forth by a mix of religious edicts and regulations, decimated the film industry and, with it, the source of employment for a community of musicians, singers, composers and arrangers.

“They decided to ban films, which they deemed vulgar because there was a lot of dancing in them,” recalled Fatima. “They said that this was un-Islamic, which is not correct, actually. So from 200 films a year, suddenly they were making only 10 films a year — and when that happened, hundreds of studio musicians lost their work. They had nothing to do. So they had to take odd jobs — driving a rickshaw, running a shop or turning into a security guard. I mean, can you imagine a great violinist working as a security guard? Ridiculous.”

In 2003, Majeed founded Sachal Studios, named after the 18th Century Sufi poet Saeein Sachal Sarmast, and with the help of the late composer and violinist, Riaz Hussain, reunited many of the great musicians from the glory days of the studios. By then, Pakistan’s music had gone electric and pop, but Majeed began recording classical Pakistani music “with real instruments,” notes Fatima. “The way he’d known it all his life, which is very much part of our culture.”

“They used to ask Izzat, ‘What are you going to do with this music?,’” recalls Fatima, who is also Majeed’s wife. “And he would say ‘Look, let’s just make music. All I want to do is preserve the heritage and I’m sure there will be a way.”

The way turned out to be bringing together his love of jazz and classical Pakistani music.

“As they worked, Majeed realized that the structure of the rags (ragas) in Pakistani music was very similar to the structure of jazz: following a basic tune, the person on the tabla would take off to do his own thing and then cycle back to the main theme again, and then the flute would go … it was exactly what happened in jazz,” says Fatima. “But they kept saying that this genre is too new. They told him ‘The Pakistanis will reject it and it will be rejected globally as well.’ But then, ‘Take Five’ happened.”