The Pianist Path of ‘Caminos Flamencos’ 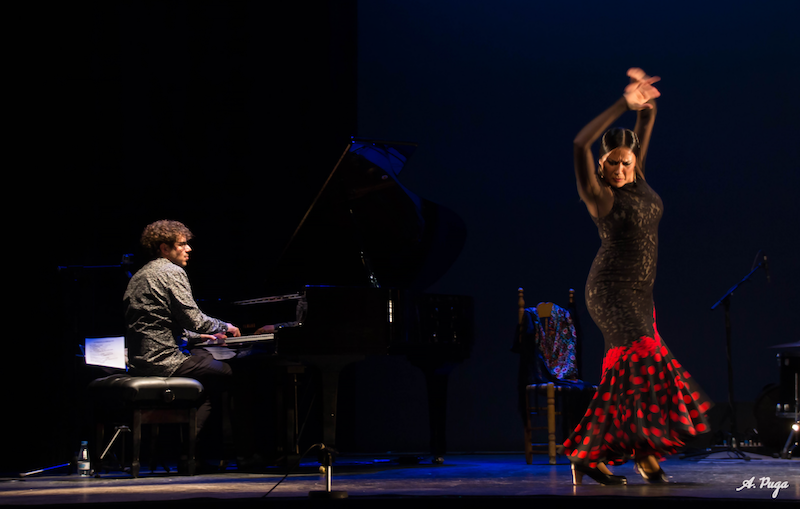 You hear the word “flamenco” — what image comes to mind? A guitar? A dark-haired dancer? The color red, a ruffled dress? Did a piano by any chance enter the picture? Perhaps not.

Pianist Alberto Raya, who brings “Caminos Flamencos” to Miami-Dade County Auditorium this Friday and Saturday, would like to help change that image. He pointed out in a telephone interview in Spanish that the piano’s history in the art form goes back at least to the early 20th century and Federico García Lorca. The most emblematic of flamenco’s poets, Lorca was also an accomplished pianist who collected Andalusian folk songs and recorded them as the accompanist for La Argentinita, a famous female flamenco singer of the day. Over 40 years ago, a cantaor (flamenco singer) as “pure” as Manolo Caracol would sing at the renowned Madrid flamenco tablao Los Canasteros, not with a guitarist, but with a pianist. And today, there are pianists like Chano Domínguez or Dorantes who have made a name for themselves both within the flamenco world and beyond. “It’s becoming a bit more accepted,” said Raya, but conceded that, “it still has a ways to go.”

Like Lorca, Raya is from Granada, one of the cradles of flamenco in Southern Spain. He became enamored of what he calls “the Andalusian cadence” as a boy, listening to his father’s recordings of cantaores Camarón de la Isla, Enrique Morente, the flamenco rock group Triana. The sound, though not always purely traditional, retained an essence unique to southern Spain. “Its music, its melody, its harmony has something that bewitches you,” he explained.

By the time he was 14 Raya became serious about becoming a professional musician. Before the dawn of the Age of Youtube, this meant an intense diet of flamenco recordings: “I began studying like crazy—I listened to a lot of music.” Later on, he sought out accomplished flamenco pianists and composers. “Those people pulled me into the depths of flamenco,” teaching him the rhythms, melodies, and keys that are vital to each palo, or flamenco song style. When he eventually came up for air, Raya said to himself, “Now I know where I am.”

His first gigs were as a band member in groups accompanying flamenco singers. For a 17-year-old self-taught musician, Raya was given extraordinary opportunities. Right out of the gate, he worked with some of the most celebrated young flamenco singers around: the legendary singer Enrique Morente’s daughter Estrella Morente, his son (who carries his father’s name), and Juan Habichuela, the younger generation of a dynasty of flamenco guitarists. Having learned at the feet of masters, when the time came for Raya to form his own band, he knew exactly what he wanted.

Three years ago, Raya began working on the idea for the show “Caminos Flamencos,” which in English translates as “Flamenco Paths.” It is a look back at his own journey through the different styles that he has explored as a musician. “There’s a little of everything. There are palos that I execute as pure, hard flamenco, there are others where I integrate a bit of jazz…I put in what I want. I’m a bit selfish that way. When I sat down to create it, I said, ‘I have to do this to my own taste.’ If I like it, then maybe others will, too. That way, I will feel it when I am performing, and that resonates with people.”

“Caminos Flamencos” comes to Miami as part of the Centro Cultural Español’s annual FlamenGO series, which seeks to showcase the best new talent in Spain and give these young flamenco artists an opportunity to begin making a name for themselves internationally. Raya travels here with an eclectic group: a guitarist who loves flamenco, but also funk; an electric bass player who is enamored of jazz; and a percussionist. “They all have their own personalities…that’s where you find the magic. We could be playing a bulerías, and the guitarist might do a blues solo within it…there are two cultures mixing in that very moment and the two understand one another perfectly.” Irene Rueda y Alba Fajardo, both from Granada, are the bailaoras who will dance in “Caminos Flamencos.”

In addition to these performances, the Centro Cultural Español is currently presenting the exhibition Living in Flamenco by Venezuelan photographer Migdalia Salazar. Salazar, who was herself a flamenco dancer for many years, takes a contemporary approach as she seeks to capture in her photographs the passion of the dance and the transitory nature of “duende,” that divine flame of inspiration that is said to overcome flamenco artists when they are truly in the moment, transported by the music. Venezuelan dancer Siudy Garrido collaborated with Salazar on the project. The exhibit is free to the public and will be up until June 2.