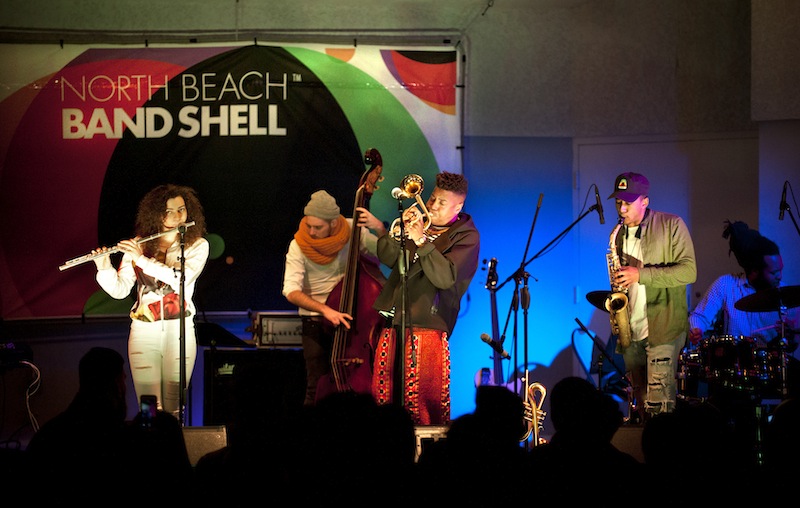 After playing a couple of pieces — and even with news of a blizzard hitting the East Coast as background — New York-based trumpeter Christian Scott addressed the still enthusiastic, hardy crowd at the North Beach Bandshell and noted the obvious: “It’s cold. We thought we were escaping the cold coming to Miami, but I see that we didn’t.”

The chilly temperatures didn’t seem to affect the quality of the music on Saturday, Jan. 23, but the show, which also featured guitarist Aaron Lebos, Reality, and the Ethiopian trio Hailu Mergia, was as much about the music as it was a community celebration of the renovated venue.

The concert was the second installment of the Seaside Sessions, a three concert series presented by The Rhythm Foundation, the Miami Beach-based non-profit now managing the North Beach Bandshell.

“We love this venue,” said Laura Quinlan, director of foundation. As it turns out, she actually grew up in North Beach and recalled coming to the Bandshell to roller skate and attend Halloween costume contests. “We started presenting events here with The Rhythm Foundation in 1999. We had an Afro- Brazilian show, we also did a French World Music series called Vive Le World and then, in 2003, we started the TransAtlantic Festival. Those were great experiences for us, very transformative. In many ways, they set us in the direction for our future.”

The Rhythm Foundation was one of several organizations that used the Bandshell, but for years, the venue “was just a shell. It had no sound, no electricity. When you wanted to use it you had to hire the city electrician to come and connect power, which was very costly,” noted Daniel Veitia, a member of the Mayor’s Blue Ribbon Panel on North Beach Revitalization, which was convened in 2014. “Finally, the city decided on a capital improvement project for the entire park. The work on the renovation of the Bandshell started in 2011. They spent $3 million renovating it.”

The North Beach Bandshell is an open-air amphitheater located at Collins Avenue and 73 Street and was designed by architect Norman Giller in 1961. It is considered an important work of what has come to be known as Miami Modern (MiMo) architecture. The updates included an expanded stage and a new backstage area as well as new lighting and audio equipment.

Last year, after a bidding process, the City of Miami Beach awarded management of the North Beach Bandshell to the Rhythm Foundation. Producing shows at a venue is one thing, managing is something else, a change Quinlan welcomes.

“We bid on it because we thought that it could be a good change of pace to run a venue instead of being a nomadic presenter,” she said. “We made the facility really easy for other cultural organizations and groups to rent and bring their own productions. It’s a very turnkey operation, and we have the marketing infrastructure to get the crowds out here.”

According to Veitia, “We hope to have something happening here [at the Bandshell] every weekend.” Veitia, who sits in the Mayor’s North Beach Master Plan Steering Committee, is an owner of Urban Resource, a real estate and property management company, and is on the board of The Rhythm Foundation. “The Rhythm Foundation hasn’t even been here a year and the amount of activation that has already been created is amazing.”

The contract between the Foundation and the City calls for a minimum of 35 events a year. The North Beach Bandshell program already stretches from jazz to chamber music and from food trucks and music events to a Kundalini yoga festival.

And, “in a kind of homage to the past we developed Dance Band Night,” says Quinlan. “It’s building upon the memory of the old Saturday dance nights. It’s a very family friendly night for people to come out and dance.”

Upcoming events at the North Beach Bandshell include Bachaco at Food Trucks, January 27 at 6:00 p.m.;; and the avant chamber group NuDeco Ensemble with guest DJ Spam on January 28 at 7:00 p.m.