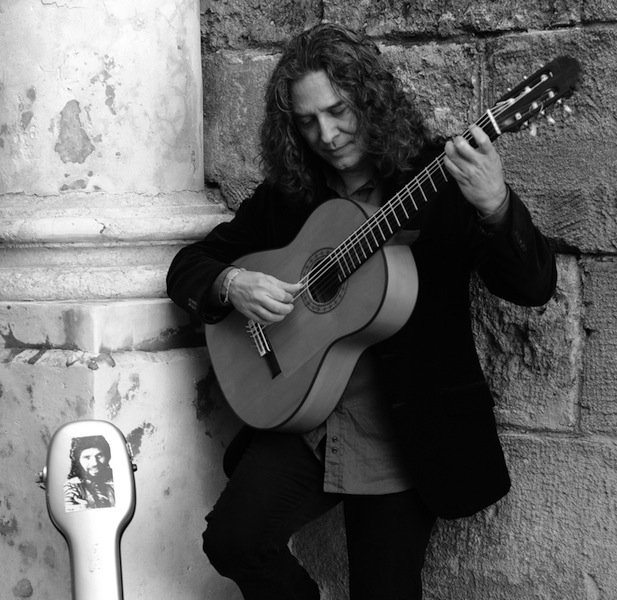 Flamenco was born as fusion. It emerged in Andalusia in the South of Spain in the latter part of the 18th century, as expression of an underclass, including both gypsies and non-gypsies, struggling to adapt and survive. Since its origins, the challenge for flamenco artists has been to hold on to its elusive identity while constantly absorbing elements from the culture around. It is a strategy of survival and the core of this art form.

Few have embraced the challenge with the brilliance of gypsy flamenco guitarist José Fernández Torres, better known as Tomatito. The five-time Latin GRAMMY winner appears at the Olympia Theater in downtown Miami on Friday as part of MDC Live Arts series.

Born in Almería in a family of musicians, Tomatito was 15 when José Monge Cruz, best known as Camarón de la Isla, one of the most important singers in modern flamenco history, happened to need a guitarist after his regular accompanist, the extraordinary Paco De Lucia, was becoming too busy with his own career. Camarón remembered the kid he had heard at a tablao, and the one-off, fill-in opportunity grew into one the most notable partnerships in flamenco. It lasted 18 years, until the singer´s death in 1992, and produced several lasting masterpieces of flamenco.

Since, Tomatito, 58, has developed a solo career that reveals a great curiosity, courage and talent to explore other genres, from Latin American folkloric styles and Turkish music to classical and jazz. Most notably, Tomatito has collaborated with pianist Michel Camilo, with whom he recently recorded Spain Forever, their third album together. It includes music by New Tango master Astor Piazzolla, Brazilian multi-instrumentalist and composer Egberto Gismonti and Django Reinhardt. “Flamenco is … so rich, so strong, that it will never lose its identity for mixing with other music,” Tomatito once said. “I’m not afraid.”

For this performance however, which features a sextet including dancer José Maya, Tomatito will focus on flamenco and music from his previous release, Soy Flamenco.

Tomatito spoke to us from his home in Almería.

The guitar in flamenco has gone from being sort of a Cinderella, an afterthought, to queen, a solo instrument that may or may not require singers and dancers. How have you lived that evolution?

I was lucky to have been born when the role of the guitar was already changing. It was not yet a solo instrument, but then Paco [De Lucia] changed everything. With all due respect to other guitarists, there was not anyone like him before or since. He had great technique, not just flamenco but classical guitar technique, impeccable rhythm, a big sound. He was the complete guitarist.

How long has your son José been working with you? You said I n an interview that your mother told you he already plays better than you did at his age.

Well (laughs) you know that when a flamenco gets an idea in his head, until he does it he won’t rest. He’s 18 and has been playing with me for two years already. He’s very serious about it and is doing it very well.

When Camarón discovered you how was it to replace Paco de Lucía?

I was a kid, we were already living in Málaga and I was playing at a tablao in Taberna Gitana. Camarón used to spend stretches of time in Málaga and he heard me play there. It turned out he had a gig and needed a guitarist and remembered “the kid at the Taberna.” So the owner of the place calls me and tells me Camarón wants me and I just said “Sure, okay” and there I went. Those days I didn’t know anything about Camarón or any of that — and that’s a good thing because if I had known I would’ve ran the other way.

Instead, for me, it was like a game: “Sure what do you want me to play?” I was a kid. I wanted to play the guitar and have fun — and then he started calling me. It was one of those things. [As for replacing De Lucia,] you don’t replace Paco. He’s the master.

Flamencologists have been harsh with artists who stray from the cannon, but you have been very open-minded about collaborating with musicians from other traditions and trying out a variety of musical mixes. How did that come about?

I learned early on to care very little for the musical dictatorships that exist in all music genres. And I say this with all respect to flamenco, I’m a gypsy and I love flamenco, but there comes a time when you have to leave the house and try to learn other things.

If you cannot do more than what you are doing, fine; but if you think you can grow, you must look for new things, learn, develop.

Your most recent albums are Spain Again, the duet with Michel Camilo; Sonanta Suite, a recording with the National Orchestra of Spain; Soy Flamenco, a flamenco recording, and now Spain Forever. Is this zigzagging in and out of classic flamenco something planned or is it you just following your interests?

No, it’s not planned. It’s perhaps the need of the artist to complicate his life. Now, it’s like traveling. I travel a lot, visit new places and learn other customs, try new things — but that also makes you appreciate more of what you have at home, and I love my street, my house, my bed, my armchair. That’s flamenco for me.