Tenor Rafael Davila Lets Music Guide Him Back to FGO 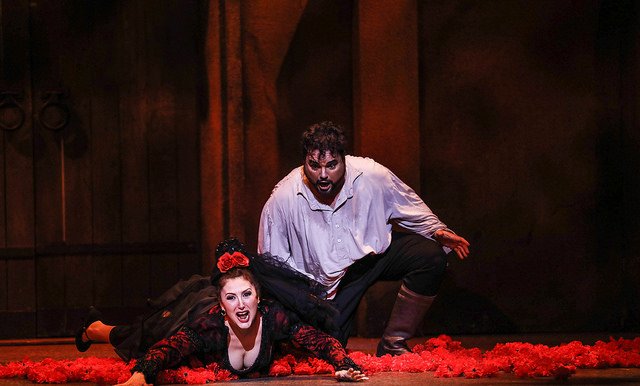 Buzzing his lips and shaking his head, Rafael Davila gets ready to rehearse. In the Florida Grand Opera’s cavernous rehearsal hall in Doral, the floor is marked with tape to delineate the rooms in the palace of Gustav III, the Swedish king who was assassinated in 1792 during a masquerade ball. This weekend, Davila will be reprising the role of the king in FGO’s performance of Giuseppe Verdi’s A Masked Ball. He played the role once before, just as his career was taking of, 13 years ago.

Davila’s first production of A Masked Ball was in Naples, Italy, in Teatro San Carlo, the theater that commissioned the work in 1858. In Verdi’s time, government censorship and a legal battle with the theater moved the premiere to Rome, a year later, and forced the composer to relocate the story from Sweden to colonial Boston. Nearly a century and a half later, in Naples, a musicologist combed Verdi’s notes, in an effort to reconstruct the opera at Teatro San Carlo, as the composer originally intended.

“It was very similar to what we are doing here,” Davila observes, as he scans a copy of the score. “But with some variations in the music.”

Suddenly a sweet soprano voice announces the arrival of the king, and the tenor dashes into the masking-tape palace. Davila is used to adapting quickly.

“Every month, I’m in a different place,” he says during an interview before rehearsal. From September to June, he travels from city to city, production to production. “I now know more than 60 roles,” he adds.

Early in his career, he played lyrical lovers like Alfredo in Verdi’s La Traviata and Pinkerton in Puccini’s Madame Butterfly. As his voice has gained heft –frequently described by critics as “beefy” or “burly” — he has taken on more powerful roles.

“I haven’t kept count, but I’ve done around seven productions of Carmen already,” he speculates, from his first Carmen in New Zealand 13 years ago, to a more recent production in Kansas City, set in the 1970s, featuring a disco ball and a girl on roller skates. “And Tosca, I’ve done plenty.”

As he circulates from city to city, Davila sees familiar faces. When he debuted with FGO in the spring of 2014, as the painter Cavaradossi, he had already fallen for soprano Kara Shay Thomson as a tragic diva and defied baritone Todd Thomas as the evil police chief in earlier productions of Tosca. In fact, the trio had performed those roles together at the Sarasota Opera in 2009, when Susan Danis was the executive director there, before she took the helm at FGO. Their familiarity might be one reason why the 2014 Tosca was one of the most spectacular productions in recent FGO history.

When Davila returned to South Florida last November, as Don Jose in Carmen, he reunited with FGO’s principal conductor, Ramon Tebar, who had also conducted the tenor in Tosca (and will conduct him in A Masked Ball). Though Davila knows Carmen well, the FGO run helped him prepare for his first gig at the Metropolitan Opera in New York, covering for celebrated tenor Marcelo Alvarez.

“From here I went directly to New York to start rehearsals,” he recalls.

One and a half hours before the opening performance, Davila learned that Alvarez could not go on. He was about to make his debut on the biggest opera stage in the United States. As it turned out, the mezzo in the title role fell ill as well. So Davila and Clémentine Margaine found themselves on the set together for the first time, less than an hour before the curtain would rise.

“We decided to let it flow,” Davila remembers. “To let the music tell us where to go.”

Back in Doral, Davila appears to follow the same principle as he prepares for A Masked Ball. The director, Manuel Pilla, leads the tenor around the set. A choreographer making his debut as an opera director, Pilla traces graceful arcs across the floor, weaving around the king’s desk, then stations Davila beside a globe. He demonstrates how the king would rest his hand just beneath his chest. Davila does his best to keep up. At the same time, the tenor listens intently to the rehearsal pianist.

Perhaps he is thinking about what he said earlier in the afternoon. “The movement is all written in the music,” he said. “If you listen to the music, you know where you have to move, and what to do.”