Talking to the Spirits with “The Blues of Morocco” 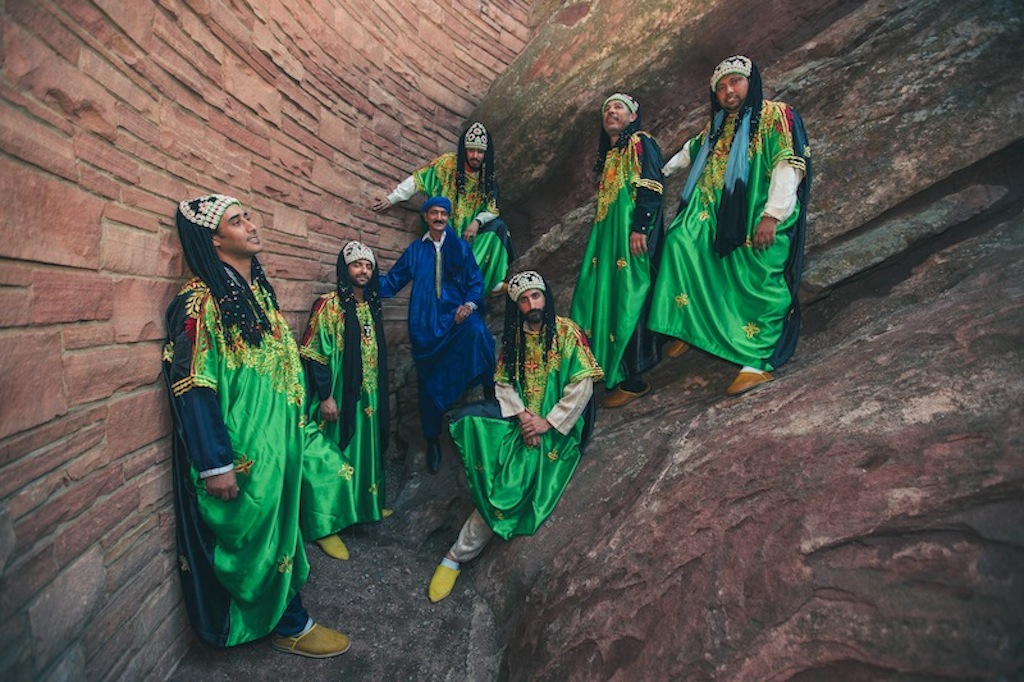 Deceptively simple, at once direct and mysterious, earthy and spiritual, Gnawa music is the expression of the black community of Morocco, which, initially, according to scholars, was comprised of black slaves.

Associating and translating cultural experiences are exercises fraught with peril. But if this all sounds oddly familiar, it might explain why Gnawa music has often been called “the blues of Morocco.”

“Gnawa is the mother of jazz and blues,” says Samir LanGus, the founding member of Innov Gnawa, a Brooklyn-based group appearing at the North Beach Bandshell Saturday. “Gnawa stayed in Africa, and jazz and blues came to the West. What we sing about, the troubles and joys of everyday life, it’s the blues.”

Not surprisingly, Gnawa music has attracted prominent Western musicians involved with jazz and blues, including pianist Randy Weston and pop and rock stars such as Jimmy Page and Robert Plant. It has also led to collaborations such as the one involving Innov Gnawa with British producer and DJ Bonobo (Simon Green), which resulted on the Grammy-nominated “Bambro Koyo Ganda”

As other displaced sub-Saharan West African people did in the Americas, the Gnawa blended their own traditions with local religious beliefs, in this case, Islam. For the Gnawa, their relationship with Allah could not be direct but has to be mediated by spirits (or djinns), and in this, music plays a critical role. It was music created in the community for private use, not only as part of a spiritual practice but as a way to preserve in the sound, lyrics and dance, ancestral memories, including enslavement.

But over time, Gnawa music also came to be a secular art. Now both, the sacred and the worldly, coexist. Having noticed the international fascination with Gnawa music, the government promoted an annual international music festival in Essaouira, Morocco. This year it’s celebrating its 21st edition.

The hypnotic songs, more like an uninterrupted garland of chants, seamlessly connected, are sung by the master, or m’allem, accompanied by a responding chorus, clapping and playing of metal castanets. The lead instrument, setting the patterns and melodies, is the low-sounding, three string lute-like guimbri or sintir (an ancestor of the banjo); and, mostly for secular performances, the group includes large, two-headed drums called tbel.

LanGus spoke with Artburst from his home in Brooklyn.

Q: There seems to be many versions of the origin and meaning of the term “Gnawa.” Could you clarify?

Samir LanGus: When the slaves came into Morocco centuries ago from West Africa, they brought this music with them. They used to speak their native language, the Bambara language (the Bambara is an ethnic group from West Africa) and native Moroccans (Amazighs) couldn’t understand them. That’s why they were called the Gnawa. The [Amazigh] word for [unintelligible] is … “Gnawa.”

Could you talk about the notion of the healing properties of Gnawa music and the lila, the trance ceremony performed to cure spiritual and physical ills?

In Morocco, they use [the music] as a healing event. People who have a conflict with the djinn, the spirit, they go to a lila, a ceremony for the djinn, so the djinn can be satisfied and happy and can leave the person. The lila starts at sundown and goes on until daybreak. Sometimes it lasts for three days; sometimes it takes the whole week. It depends on the budget of the person.

Q: How about the music for the spirits and the colors associated with them? It echoes the Afro-Cuban religion, Santeria, with its pantheon of deities, each with distinctive attributes, colors and specific songs.

We have seven different spirits, and each spirit has its own color and songs. The colors are white, light blue, dark blue, red, green, black and yellow. Each color has a minimum of 12 songs. We start with non-color songs. … It’s the beginning of the lila. Then we go to the colors. We start with white, and it keeps going in order, and we close with yellow, the female. That’s the love color because it represents the sunrise.

The repertory that Innov Gnawa performs is traditional or includes original songs composed by the members of the group?