Subtropics: A Festival of New Music for New Listening 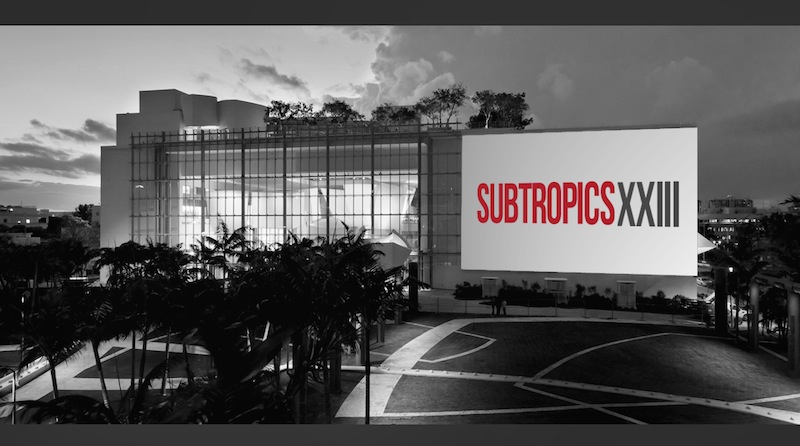 Before there were grooves, string quartets, jazz trumpet solos or Kanye West, there was sound.

That, in short, is the subject of Subtropics XXII, Miami’s Experimental Biennial of Music and Sound Art, taking place this year starting Wednesday through March 8.

Founded in 1989 by Venezuela-born, Miami-based local artist and composer Gustavo Matamoros and produced by the South Florida Composers Alliance, the festival, against improbable odds, was held annually until 2007. Since, it has become a biennial event.

It is part armchair exploring, part walk into a music R&D lab and, always, a chance to test and relearn the art of listening.

Over the years, Subtropics has included a dizzying variety of concerts, sound installations, and fun, quirky events such as this Fluxus performance on the beach. It has hosted composers John Cage, Alvin Lucier, Pauline Oliveros and MacArthur Fellow “genius” George E. Lewis, among others, and featured premier modern music performers such as soprano Joan La Barbara, pianist Anthony de Mare and oboist Joseph Celli.

Subtropics XXIII opens with an immersive experience: Frozen Music: SoundScape, an installation by David Dunn, Rene Barge and Matamoros at SoundScape Park, the outdoor space by the New World Center, in Miami Beach, on Wednesday at 4:00 p.m. But it also includes a concert of music by Cage, an intimate, Listening Club session featuring the music of Robert Ashley and a show by The Claudia Quintet, one of the truly original groups in contemporary jazz.

We asked Artistic Director Matamoros about this eclectic mix over the years.

Why did you start Subtropics?

GM: It was inspired by the New Music America Festival, which meant a festival of music by living composers, held in 1988 [Matamoros worked at the festival as technical coordinator], so I figured there was a need for exposing people in South Florida to more of this music. But essentially I did it for selfish reasons: I wanted to continue being a composer, I wanted to continue being a sound artist, I wanted to live here and I wanted people to at least understand or get to know this music.

How do you choose the artists for the program?

I think about the festival as I would about a piece of music. I don’t just invite people. I start with an idea, and six revisions later — after seeing what is possible given the funding, the schedules and all that — I arrive at what is possible. The one key element in the selection of artists is who is actually trying to do something different.

As a listener, your work both as a composer and as a curator often suggests a sort of musical R&D. How do you think of it?

That’s exactly what I feel I’m doing. I probably could’ve had 10 CDs of stuff out by now and I don’t. I don’t think of what I’m doing as creating product for commercial consumption. I’m thinking  of what I’m doing as a way of exploring sound. I feel more like an artist doing research.

That’s why the term ‘experimental music’ has a certain resonance for me. Organizing the festival, curating the program, preparing the pieces, it’s all part of my research.

Much has been written about the change in the arts climate here, citing the success of Art Basel but also the opening of substantial anchor spaces such as the Arsht Center, the New World Center and PAMM. Has any of this made Miami more hospitable for new music, sound art and experimentation?

Yes, it has — but some of it has to do with Miami and some has to do with the world. What’s been happening [in the visual arts world] has been really good in opening the door of acceptance to what we do and it’s not only locally. The Museum of Modern Art in New York City just had its first sound art show [ Soundings:  A Contemporary Score, 2013]. Most of the pieces had a visual component, so it wasn’t just sound, but it was a first step. Some people are beginning to figure out how to deal with sound as an art object — which is something we have been experimenting with at the festival since I started it.

On the other end, in popular music, especially in hip hop culture, there’s a different relationship with sound, especially with electronic sound. Because the lyrics, the poetry, is what carries the message … they are not afraid of utilizing any sound whatsoever — and they do. What they do different from us is that they put everything to a beat.

So yes, Miami feels like it’s building towards something — but we’re not quite there yet. In 1989 there was a lot of acceptance to these [musical] ideas in the art community. But the community at large didn’t know what to do with it. I was ‘the weird guy.’ And hey, for many, I still am. But I still feel that what we do … offers people insights into how sound works and how to develop listening skills. That’s an important aspect of this music. It’s challenging sometimes, but it really promotes listening. And, for me, how do you develop a relationship with sound is the first step on developing a relationship with music.

Subtropics XXII kicks off Wednesday at 4:00 p.m. at the SoundScape Park in front of the New World Center and runs through March 8, with a variety of concerts and events at several locations including at the Audiotheque at 940 Lincoln Rd., both Miami Beach; most are free with a few that cost for entry; for details on dates, times, and concerts, subtropics.org.