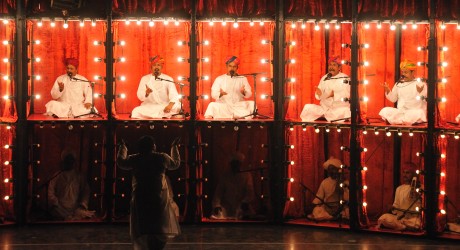 Inspired by sources as far flung as Amsterdam’s Red Light District and the women’s quarters of India’s Hawa Mahal (a royal palace in Jaipur), The Manganiyar Seduction promises to plunge concertgoers into the music and song of an ancient musical tradition and Sufi poetry. The Manganiyar are an all-male caste of singers and instrumentalists from Rajasthan in northern India. At the heart of their sound is the kamancha, a stringed instrument played with a bow and the hypnotic beat of the dhol, a large percussion instrument. The singer’s voices careen between lament and ecstasy. Artistic director of Can & Abel Theaters, Roysten Abel, conceived of The Manganiyar Seduction as a way to bring this unique sound and ancient musical tradition to the global stage. The performance consists of 39 vocalists and musicians, but Abel’s vision always had a theatrical bent. One key theatrical elements of the performance is the incorporation of a Daevo Khan, a conductor who seems to leap, dance, and fly across the stage as he conducts. “In Indian music we don’t have a concept of a conductor,” explains Abel by phone from a tour stop in New York. “He [Kahn] was one of the musicians in the community of Manganiyar musicians and we trained him to be a conductor. It was difficult in the beginning because he was caught up in playing his instrument, but now he’s one of the show’s most theatrical elements.” The Manganiyar Seduction’s set design consists of four levels of boxes with red velvet curtains that pull back to reveal the musicians and singers. While visually reminiscent of the Red Light District, the show’s theme of seduction is ultimately connected to a poem. The 80-minute performance consists of one song, which in reality is a poem composed by Sufi poet Bulle Shah in the 1700s. “Instead of singing several different songs, they sing this one devotional poem,” explains Abel. “The poet writes, ‘The only alphabet that my beloved taught me were the alphabets of love.’” Although the sensual stage design and romantic lyrics may inspire thoughts of carnal love, The Manganiyar Seduction’s music and song ultimately praise God. “Here, we are talking about the seduction of the soul,” says Abel. “It doesn’t really matter the gender. The beloved could be the universe. It could be god. In the Sufi tradition the relation with god is expressed as a relationship with the beloved.” Presented by Miami Dade College’s MDC Live Arts, The Manganiyar Seduction hits the stage for one night only at the Miami-Dade County Auditorium, 2901 W. Flagler St., Miami 8:00 p.m.; tickets range from $27 to $47, $10 for students of MDC; www.mdclivearts.org. This article also appears on Miami New Times