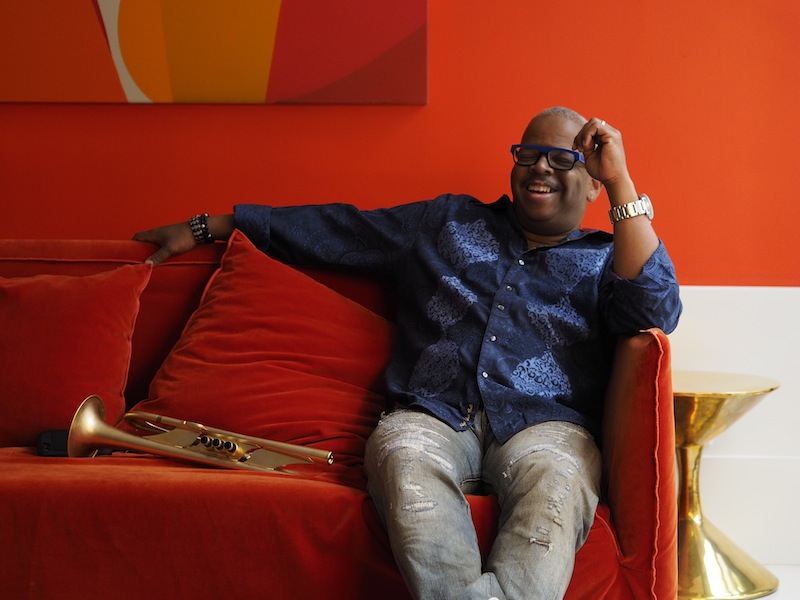 When trumpeter Terence Blanchard steps off the plane in Miami, arriving to perform in the opening of the Jazz Roots series at the Arsht Center for the Performing Arts, he will have just finished scoring his 15th movie for director Spike Lee, Chiraq.

“We finished it two weeks ago and we’re going back now to score two more additional scenes and then we will be done. That’s what I’ll be doing in Los Angeles right before I come to Miami,” says Blanchard from his New Orleans home base.

The 2015-2016 Jazz Roots season opens Friday night with “The Movie Music of Spike Lee and Terence Blanchard,” which celebrates Lee’s movies and the jazz-infused scores Blanchard has created as resident composer for the director.

Starting his musical career with Lionel Hampton’s orchestra while at Rutgers University, then playing with Art Blakey’s Jazz Messengers, the five-time Grammy Award-winning trumpeter has been leading his own Terence Blanchard Quintet since 1990. That’s who will be playing with him Friday night, along with the University of Miami Henry Mancini Institute Orchestra. Performing with the Mancini Orchestra will be a homecoming – Blanchard was named artistic director of it in 2011, where he taught and helped train student musicians for three years. “I forged relationships with many of the students and the faculty when I was there, so it’s going to be exciting coming back”

He says the concert will be special for another reason. “The fact that I am playing the opening show, which is dedicated to Larry Rosen. . . I wish it was under different circumstances, however,” says Blanchard, referring to the death of the Jazz Series co-creator in October.

There’s a personal fondness, along with memories, that Blanchard has of Rosen, the trailblazing music executive. He remembers almost being signed to Rosen’s contemporary jazz record label GRP, but the company was sold before the deal could be inked. “We remained good friends.” He says that Rosen was unique in the industry — someone who “understood that if the art was great, the commerce would follow. He’s going to be missed because of the impact that he’s had on jazz music.”

Blanchard has become legendary in jazz music, too, and not just for his Spike Lee scores. He has recorded more than 30 solo albums and has more than 50 film scores to his credit. But it was Lee who saw the potential in Blanchard for writing movie compositions. It started when the trumpeter was hired for the film Mo’ Better Blues to coach actor Denzel Washington on how to look authentic as musician Bleek Gilliam. “I got a chance to write one scene, which actually started my career in this business because Spike said ‘you have a future in writing for film.’ Then he called me for Jungle Fever.”

To this day, Blanchard says Lee challenges him creatively. “Working with him has taught me how to treat the music as another character in a film.” He also says that Lee “loves melodic themes” and promises that’s what will entertain audiences here in Miami.

Scott Flavin, resident conductor for the Henry Mancini Institute Orchestra, which features student musicians, says the experience prepares them for their careers as professional musicians. “With a show like this, with so many soloists, it is a great learning experience and the students rise to the occasion.” In fact, saxophonist Phil Doyle, a Mancini Fellow, will be playing with Blanchard’s quintet.

Blanchard agrees with Flavin as to the incredible value performing with established artists offers the students. “They get the practical experience of seeing how a professional rehearses, how they conduct themselves and how they interact with musicians. Then they see how it translates into a live performance.”

And when it all comes together live onstage, it’s nothing short of magic, according to Flavin. “There’s an energy that’s given out by a great performer and playing with these kinds of stars is life changing for the students,” says Flavin. “You can lecture all day long about performing at this kind of level, but these performers know how to move an audience, and it’s something that can’t be replicated anywhere else.”

A version appears in the Miami Herald at http://www.miamiherald.com/entertainment/article42945696.html