The South Florida Symphony Orchestra (SFSO) continues the celebration of a quarter century of fruitful existence this year with a series of concerts that began in November and will last until April. There are five installments with world premieres, selections of operas, concertos for various instruments, and symphonies along with Bruckner’s moving “Te Deum.”

The second series for the XXV anniversary (Masterworks II) will be composed of Shostakovich’s “Ninth Symphony”; Gottsch’s “Ocklawaha” (world premiere), and a selection of opera arias by Verdi and Puccini with the soprano Catalina Cuervo and the tenor Adam Diegel. This is the first year that the symphony is performing its Miami concerts inside New World Center’s Michael Tilson Performance Hall. They kick off the second series on Tuesday, Jan. 24 there, then at The Parker in Fort Lauderdale on Wednesday, Jan 25, and at The Tennessee Williams Theatre at the College of the Florida Keys on Saturday, Jan. 28. 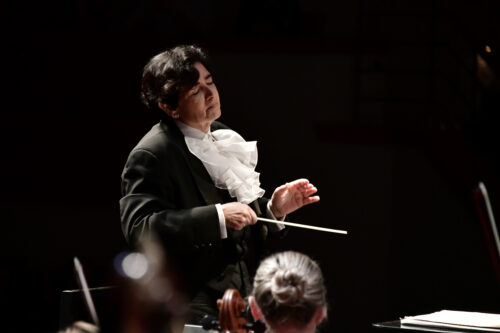 SFSO was a dream come true in 1997 when Sebrina María Alfonso founded the Key West Symphony Orchestra with the support of family, friends, and civic leaders interested in making live symphonic music accessible to the community. A dedicated and intense work materialized when 48 musicians gathered at the Tennessee Williams Theatre to perform their first concert on Dec. 11, 1998. Since then, the group has become a cultural institution with a wide sphere of action covering Palm Beach, Miami-Dade, Broward, and Monroe counties.

Born and raised in Key West, SFSO’s music director and conductor had a great passion for music from an early age. She earned her bachelor’s and master’s degrees in music from Virginia Commonwealth University. Then pursued Ph.D. studies in Orchestral Conducting at the Peabody Institute at Johns Hopkins University.

“I have always had a passion for the New World Center. As we celebrate our twenty-fifth anniversary and our Miami audience continues to grow, performing in this purpose-built concert hall is a thrill and an honor,” says Alfonso. “Our first concert at NWC last November was a very emotional event for musicians, soloists, audience, staff, and me especially. We knew it would be a beautiful experience, and it was.”

Although she was educated at universities in other states and had the opportunity to have a successful career in the United States and abroad, Alfonso was faithful to her native Florida. “I always wanted to bring symphonic music to the community that I didn’t have in my childhood growing up in Key West,” she adds. 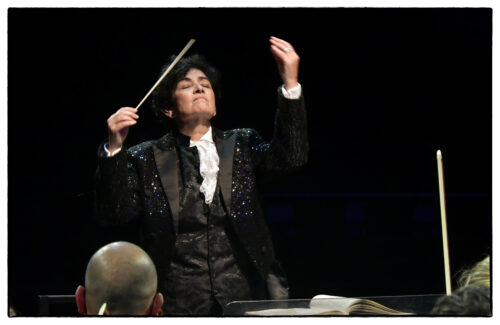 The universe of orchestral conducting, like many other fields of culture and life in general, has historically been dominated by men. For Alfonso, it has always been a challenge to navigate those waters, regardless of her talent. “I was overlooked because there was only room for one female conductor,” she recalls. “So, I started my orchestra. The attitude is changing. Today, more women are leading orchestras worldwide.”

Another essential facet of Alfonso’s work is the implementation of musical education programs, which occupies as important a place as conducting the orchestra. “Since Day One, educational programs have been part of our mission,” she says. “SFSO is committed to giving the gift of music to children in all three counties (Broward, Miami-Dade, and Monroe),” she adds. “Our first concert at the Tennessee Williams Theater in 1998 was dedicated to the children of Monroe County Schools, whom we bus to the concert hall. Today, we have served one hundred thousand South Florida children.”

Alfonso digs deep into music history. “My approach to music implies a great knowledge of the time when it was created,” explains Alfonso, referring specifically to Shostakovich’s “Ninth Symphony,” which is on the upcoming program. “Shostakovich’s music has such a history that we must understand his world. He lived in terror of Stalin, but his works were those of a courageous man who revealed atrocities through his compositions.” 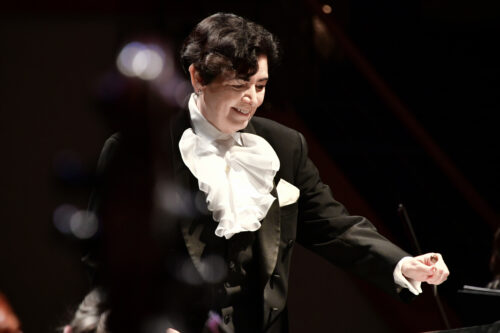 Also on the program are opera arias from Verdi and Puccini, featuring soprano Catalina Cuervo and tenor Adam Diegel.

“We will also have the world premiere of our composer-in-residence John Gottsch’s ‘Ocklawaha,’ inspired by nature and native Florida.”

Celebrating 25 years of the SFSO is a great achievement for such a dedicated group. According to Jacqueline Lorber, SFSO president, and CEO. “We are thrilled to bring these masterpieces to our audience . . . and to perform these works at the renowned New World Center. And we look forward to kicking off our season at Key West’s iconic Tennessee Williams Theatre, where the orchestra was initially created.”