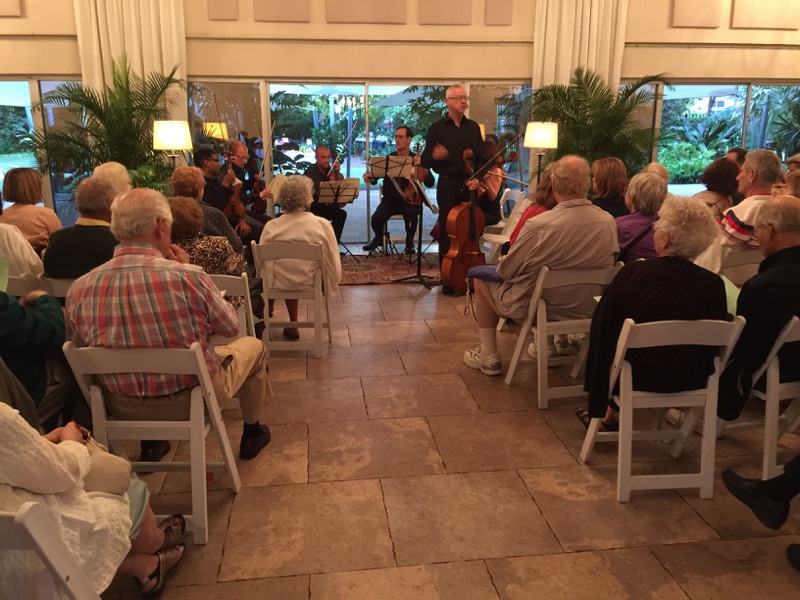 In the mood to see exceptional classical music performed live, but not up for an intense, thunderous symphony orchestra?

The South Beach Chamber Ensemble’s (SBCE) Music in Beautiful Spaces series may be just the ticket.

The group is presenting a concert titled, “The Brilliance of the String Quartet,” that features works by Haydn, Puccini and Shostakovich, on Nov. 7 at the Ancient Spanish Monastery in North Miami Beach. They performed Nov. 3 at the Miami Beach Botanical Garden.

The SBCE’s mission is at once ambitiously optimistic and refreshingly simple.

“The goal is to surprise people and delight people,” says Michael Andrews, founder, artistic director and cellist for the SBCE, now in its 22nd year. “Our vision is a world where chamber music inspires and energizes all people, creating peace, harmony, joy and unprecedented satisfaction with being alive.”

For these shows, the ensemble consists of Andrews on cello, Eric Eakes on viola, and Tony Seepersad and Ericmar Perez on violin. Its sparse size fits its intended audience.

“We play in intimate, small spaces, because chamber music is for a small group of listeners, up close so they can really see the hair on the strings, the fingers on the fingerboard, and be involved in the dialogue between the musicians and really get in on the action,” Andrews says.

That intimacy is in stark contrast to a symphonic performance.

“The suite of music with an orchestra – with the winds and the brass and the percussion and huge string sections – can wash you away like a wave, in a good way,” he says. “In chamber music, it’s more like being on the beach in Miami. It washes over you gently.”

Andrews says the difference between an orchestra and a chamber ensemble can affect how a performer approaches each from a philosophical perspective.

“Each one is great, but each one has its plusses and minuses. In chamber music, you really get to stand out, because if you’re the violist or the cellist, you’re the only one on the part. And it can be very scary,” he says, with a laugh. “In an orchestra, there may be eight to 12 cellists in a section, and we’re all playing the same line with the same intensity and the same spirit, but we’re not standing out. The point of an orchestra is to blend in.”

“And then I was looking for something that would really contrast with Haydn, and Shostakovich is one of the monumental composers of the 20th century. His 3rd was written in 1946 right after the war, and he had a tortured life within the Soviet system, and he tried to express himself, and he did the best he could with his music. Some of it was covert and some of it was overt, and so there’s a lot of sarcasm and wit and angst in his music. I thought that would be a really great contrast with Haydn.

“And then Puccini is mainly known as an opera composer,” Andrews continues. “But he wrote this exquisite piece called ‘Crisantemi,’ which means chrysanthemums, in memory of a good friend who had died. And it’s a gorgeous, gorgeous piece, very operatic.”

Like so many others who find great success in their professions, Andrews’ introduction to the cello seems random, almost by happenstance.

“I was in fourth grade … and we lived out in the country in Michigan on 2 acres next to farms,” he recalls. “And at that time you had an aptitude test for music, and I guess I must have done OK. In fourth grade, you could only do strings …

“The options were basically the violin, viola or cello, and my mother had played the violin growing up and she hated it – it was also very loud and noisy and screechy, and she said she didn’t want me to do that. And I had a friend who was going to play the cello, so I thought, ‘Oh, I’ll play the cello.’ I really didn’t know what I was getting into, but by high school, I knew that was what I wanted to do forever.”