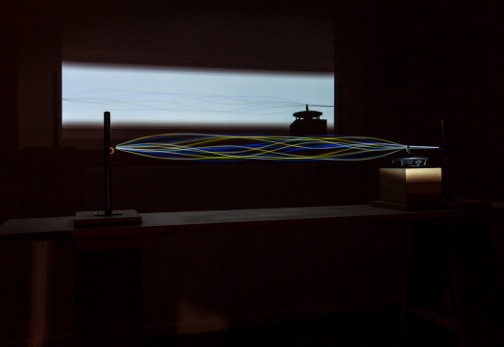 While the term “experimental” music may be close to wearing out its grooves, Colombia-born Alba Triana’s practice bears significant kinship to the testing methodology a physicist might use ­– or an alchemist.

Triana explores the interface between natural science and music. Currently focused on the interaction of sound and light waves, she combines rigor and poetic finesse. She calls her current “Music on a Bound String” series “sound sculptures.” They ask such questions as, “Can music be seen, rather than heard?”

The setup is fairly straightforward. She fastens an elastic string to one vertical post and passes it through another, about four feet away in the larger versions. A tuning peg determines string tension, and the string is mechanically activated by low-volume loudspeaker tones, controlled by the artist’s electronic score. The string moves somewhat like a jump rope, and each piece is programmed differently. Illumination ranges from ambient light to projected colored light to stroboscopic LED lights. These are also programmed to interact with the strings and produce a discrete “behavior” in each piece.

Beholding these works is akin to the meditative act of watching a flame, and uncertainty arises about what is being seen and what imagined. Is there only one string, or several? The phenomenon is akin to watching a strobe light arrest a moving dancer, or watching a sequence of still images become a movie.

Why sound sculpture? “The sound you’re hearing is residual, like when a guitarist slides his fingers along the strings; it’s not part of the composition. What I compose is what you see,” she explained, while demonstrating beta versions of some of the pieces destined for exhibits in Bogotá.

Besides simultaneous October expositions of “Bound String” and kindred works at ARTBO International Art Fair and Galería Beta in Bogotá, Triana was awarded a commission by the Kronos Quartet. It will premiere in March in Bogotá and later come to Miami. The celebrated musicians have challenged Triana to incorporate her distinctly experimental approach to composition and presentation, while creating a piece that can be incorporated into the logistical rigors of a touring program. “Complex, innovative, but practical,” she summarized. And obviously no “messing around with” their precious instruments.

Again, Triana explores both the physics and poetic shaping of sound, this time working with the intrinsic resonances of the violin, viola and cello sound boxes – rather than their strings. While accepting certain unpredictable elements intrinsic to this approach, she explains, “I am trying to follow some fundamental properties of the instrument and to come up with a piece that I can control in a way, because I want to do something that is guided by me.” The piece is titled “Music for Four Resonators.”

Each instrument is “played” by a microphone that is used something like a Geiger counter. But instead of radium, it senses the inaudible vibrations of the instrument – held in a vertical stand. Each performer slowly sweeps a microphone near his/her instrument’s sound box – without touching it – to induce etheric sounds that resemble a theremin.

In collaboration with audio engineer María Barona, through months of trials and debugging, Triana has devised a “rig” that provides a sonic range that is interesting, audible and listenable (no head-splitting squawks!). They’ve rigorously tested and documented the electronics, cabling, mixing and digital controls for “roadworthiness.” More enjoyably – joined by José Ignacio Hernández, Triana’s composer husband – they’ve also conducted numerous informal rehearsals. “Anything that comes to my mind, just to get to know the material,” Triana explained.

Having devised her sound vocabulary, Triana is finalizing both the actual dynamics of the composition and its “score.” No conventional notation will do.

“So, I have to come up with a method in which I can instruct the performers to do certain steps, knowing that we don’t know exactly what is coming out of the instruments,” she explained. Interplay between control and intuition remains central. Immersing herself in each project, she plumbs its depths, while remaining open to unexpected tangents. These spinoffs provoke the new ideas that keep Triana engaged, underlying her appeal to the Kronos Quartet, to visual arts curators and diverse audiences.