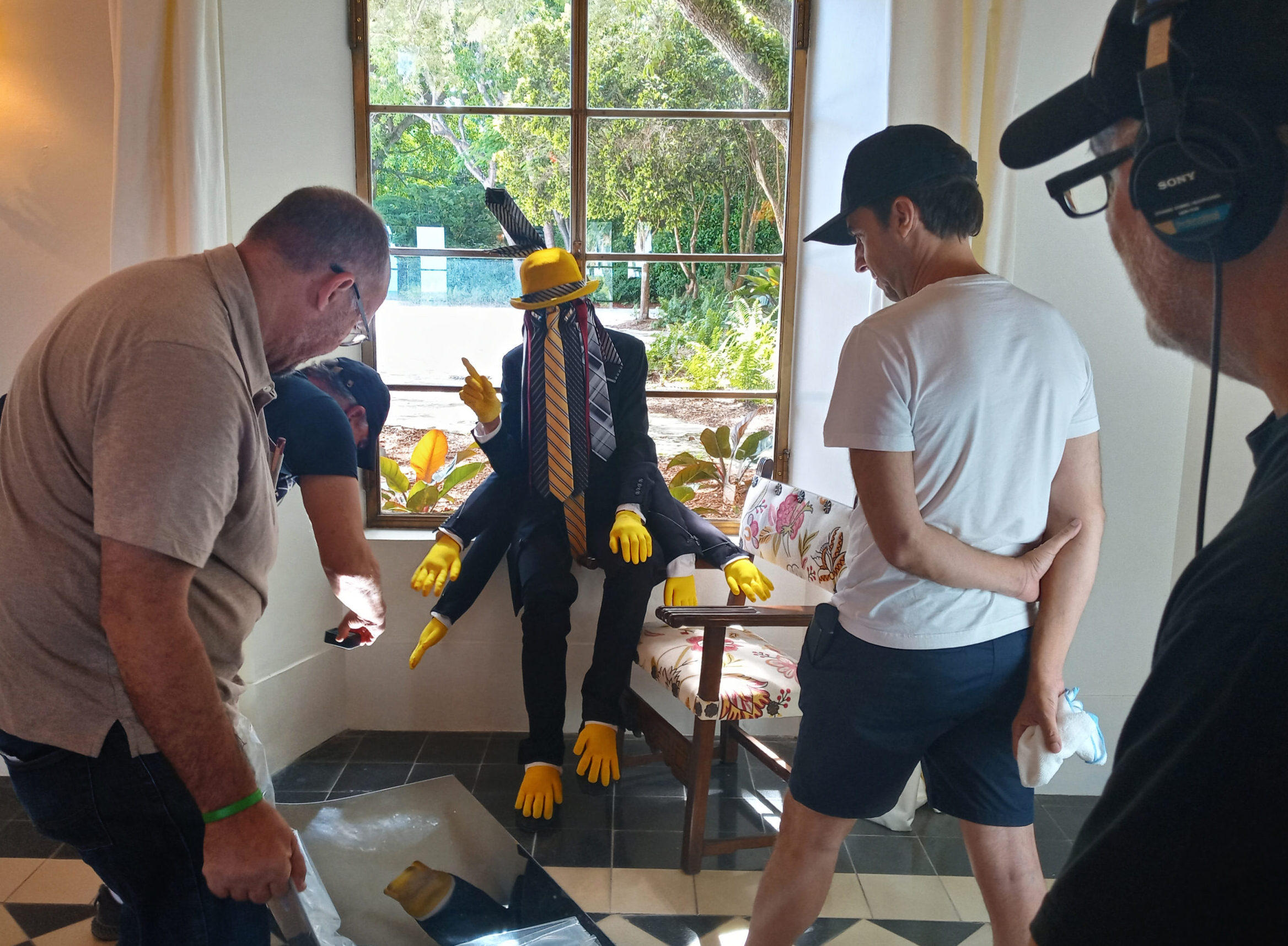 Working on a collaboration for “And Sometimes . . . The Space is Full of a Previous Space” at Deering Estate are, from left, Freddy Jouwayed, filmmaker Ricardo Matamoros, performance artist Pat Oleszko, and intermedia composers José Hernández Sánchez and Gustavo Matamoros, commissioned artist. (Photo courtesy of Claudia Arano)

We live surrounded by sound, much of it muted by habit and routine — the drumming on keyboards, the glissandi of elevators, the humming of a refrigerator, the accents and rhythms in nature. Gustavo Matamoros hears it — and summons its possibilities

Born in Caracas, Venezuela, and living in Miami since 1979, Matamoros is a one-person musical research and development department. As a composer, curator, and sound artist, his work has featured a broad range of devices and strategies, from conventional instruments and the musical saw to electronics, tape, installations, text, and video. 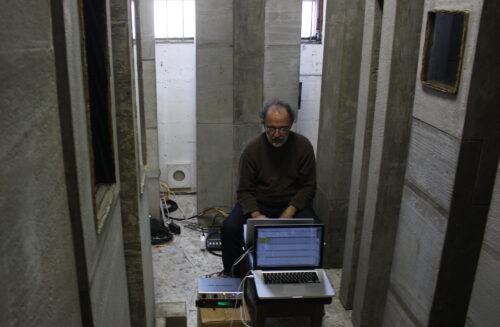 Gustavo Matamoros, a composer, curator, and sound artist, seen here at Bridge Red Studios in North Miami, is an artist-in-residence at Deering Estate where he is presenting a four-part collaborative series on Thursdays in September. (Photo courtesy of Rene Barge)

He is also the founder and director of Subtropics, an organization dedicated to “the creation, public presentation, documentation, discussion, and publication of experimental music and sound-based intermedia.”

Subtropics’ flagship event is the Subtropics Festival in Miami. It was founded in 1989 and held annually until 2007, when it became a biennial gathering. Last year it celebrated its 25th edition. But Subtropics has also produced programs such as the Audiotheque  (2012-2018), a sound-based art and performance experience at Matamoros’ studio at ArtCenter South Florida (now Oolite Arts ), and the Listening Gallery (2010-2015), which offered sound art in a public art setting. It operated from the facade at 800 Lincoln Road and was complemented by a video installation piece.

“Art is about discovery. Then the results of those experiments become available for people to experience. These events are experiments, but I do them to build awareness about sound,” says Matamoros. “For me, the experience of sound is most important, and it’s both a tool for enjoyment and understanding life. Life speaks to us through sound.” 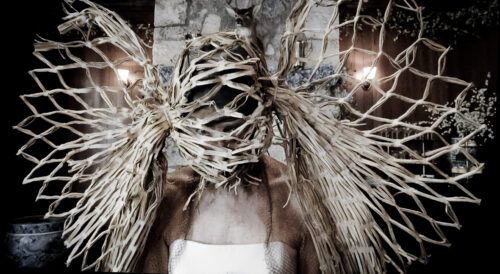 Paranormal’s Lizard Queen character by Pat Oleszko, part of “And Sometimes . . .The Space is Full of a Previous Space” by Gustavo Matamoras at Deering Estate. (Photo by Ricardo Matamoros)

Beginning Thursday, Sept. 1, Subtropics and the historic Deering Estate are presenting “And Sometimes . . . The Space is Full of a Previous Space,” a four-part series created by Matamoros, who is a current Deering Estate artist-in-residence. It features experimental multimedia collaborations that include site-specific recordings, new pieces, and a retrospective of Subtropics’ work over the years. The events will take place indoors at the Deering Estate Visitor Center theater.

“When you get off the beaten path, you really have no idea what you’re going to find, so it’s work that’s very challenging to package,” says Matamoros. “I’m not an impresario or anything like that. I’m simply an artist motivated to create community around this weird stuff that I do. I’m thinking about exploring sound, not making a product, so after 30 years of work, I don’t even have a CD. So, what I thought I’d do this time is work around four things that might result in something concrete.” 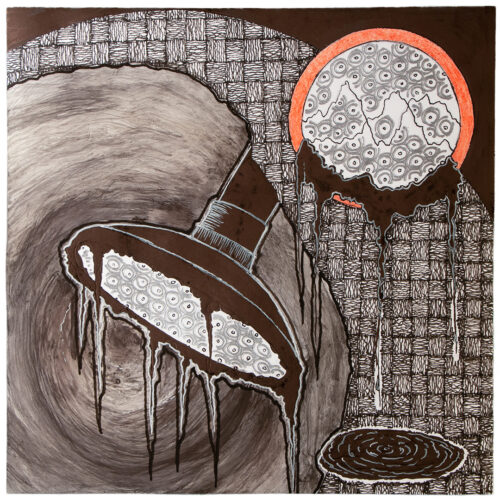 “Coincidence,” a drawing by collaborator Ralph Provisero, was created for the audio track of the same name in “Indivisible” in collaboration with David Dunn. (Photo courtesy of the artist)

The opening evening, “Indivisibles,” is inspired by making a CD,  he explains. “It’s going to be an intermedia exploration of the tracks that David Dunn and I have put together, recordings from 30 years of making music, for this limited-edition art album CD, released by Subtropics Editions. It’s a kind of retrospective. We’ll play the tracks in four channels and have projections of the visual interpretations (that) Ralph Provisero, a local artist, made of each of the tracks.”

From its inception, the idea of “And Sometimes . . .” was “to create excuses for collaboration with other artists,” says Matamoros. The second evening, on Thursday, Sept. 8, entitled “Pin Pan Pun” is a collaboration with Miami-based composer Jose Hernández Sánchez. “We met a few years ago, and he’s been composing really interesting works with theatrical elements, combining video with the sound.”

He notes that “Paranormal,” the third installment in the series on Thursday, Sept. 15, draws from the mythology of the place. “When you visit the Richmond House, on the second floor, they have a whole room with documentation of what people claim to be paranormal activity in the house. It’s part of the history of Deering Estate,” explains Matamoros. “So, we went in and made a 24-hour recording at the mansion, at a very high sampling rate. That means that we recorded sounds that were beyond the threshold of our hearing. When the sound is that high, you have to slow it down three or four octaves before you start hearing something — we then picked from what we found and made an installation with those sounds.” 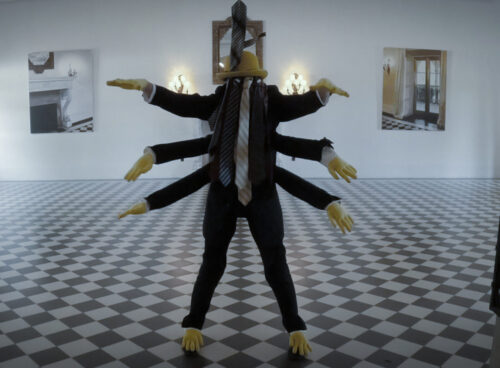 “We started discussing expanding this idea for “Paranormal” to a format in which we would have images and maybe even performance. So, we got the ball rolling. Pat created these characters like ‘Army guy’ with eight arms and decided to see where it will take us. We might end up making a movie of it.”

The closing performance, “And Sometimes . . .There Is More,” on Thursday, Sept. 22, highlights content from Subtropic’s archive featured in an audio-visual setting designed and performed by Freddy Jouwayed and Rodrigo Arcaya. “I want to find new ways to repurpose and present some of that material,” says Matamoros. “I don’t want all this work just to live in our archives.”

COST: Free but RSVP is required for each event.