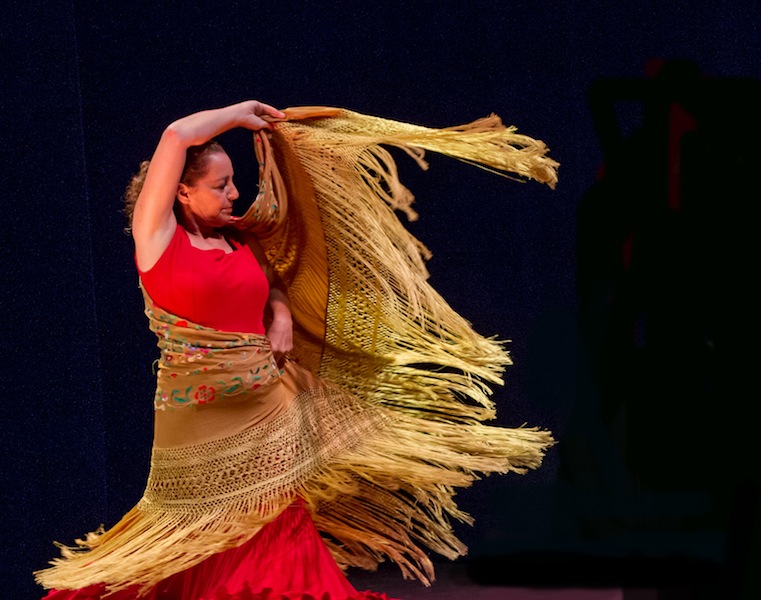 Siempre Flamenco, a Miami based Flamenco arts organization, is widely recognized in town for the quality of the festivals they have presented in Miami. The organization was founded by the husband and wife team of Paco and Celia Fonta — he is a Flamenco guitarist and singer; she is a Flamenco dancer. Their individual performances as well as their classes have won the organization even more support.

We talked to Celia Fonta about their upcoming festival, which takes place this weekend at the Arsht Center for the Performing Arts.

AB: Miami is regularly treated to a great many Flamenco performances and mini-festivals, yet yours is considered distinct.

CF: Ours is a festival that features Flamenco song. This is what makes it unique. There are no other festivals in Miami that showcase song.

Yes, but usually in the flamenco shows we see in the States, the singers are the backdrop for the dancers. This is called singing “atras.” But in flamenco there is also the tradition of singing “alante,” where the singers take the spotlight. Once all summer long in small towns in Andalucía there were flamenco festivals that featured such singing. Today, very few such festivals remain due to both hard economic times and the age of the singers. Most of them are 65 or older; only a handful are left. Flamenco “alante” is an endangered art. We want to do what we can to help keep the tradition alive.

Do “alante” songs/rhythms differ what we are accustomed to hearing from flamenco “atras.”

In many cases, yes. Flamenco has easily 20 distinct rhythms. Here in the States we are familiar with five, max. We’re proud to be able to bring more to our audience. Take the song of Javier Heredia, for instance. He will be performing at our festival.  Javier is a festero, the youngest of one of the oldest of flamenco traditions. Festero song is the most rhythmic of all flamenco. It is the most lighthearted, based as it is on bulerias, so called foolishness. Festeros dance as well as sing, but their dance never eclipses their song.

What other type of song can we expect to hear?

The great Paco del Pozo will be singing with us. A master of all flamenco styles, Paco is best known for his devotion to cante jondo or deep song, the most mournful of flamenco’s traditions. Not quite a decade ago, he was awarded Spain’s most important flamenco singing prize, La Lampara Minera. His song has only become more measured, more exquisite, according to Spain’s El Pais newspaper.

We are also delighted to be presenting singer Ismael de la Rosa, member of the legendary Fernandez family of gypsy musicians in Seville. Miami audience’s had a taste of Ismael’s “atras” voice during the 2014 Arsht performance of Flamenco U.S.A. Now he will receive the spotlight his song deserves.

What about dance? Will Heredia’s festero dance be the only dance in the program?

No., no. We are well aware Miami audiences love flamenco dance, and we don’t intend to disappoint. Our program is arranged to alternate between a singer and a dancer at center stage. Jose Barrios will be performing with us for the second year.  I consider him one of the most thrilling male flamenco dancers on the scene today. Barrios is both the choreographer and principal dancer for Spain’s legendary Maria Pages Flamenco Dance Company. He has become a legend within that legend. Barrios now has his own extraordinary flamenco company as well. I am proud to be sharing the stage with him.

So Miami will have an opportunity to see you dance as well?

I will be dancing. My husband, Paco, will be performing as well. He will be on guitar along with two other important flamenco musicians who are also from Spain.

AB: This year the festival will be held at the smaller Carnival Theater Studio at the Arsht?

This will be our third year in that venue. It is a small theater with only 200 seats. Such an intimate space is ideal since it allows the audience to feel the gorgeousness of flamenco full strength.