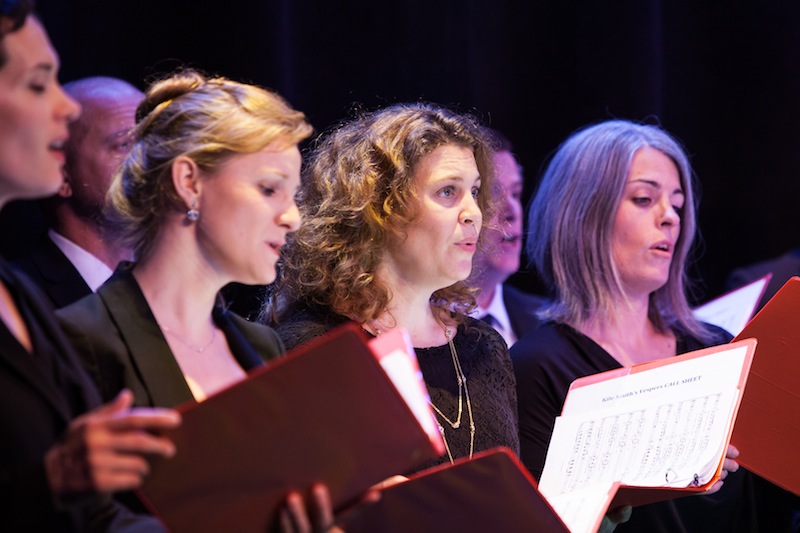 Seraphic Fire, South Florida’s Grammy-nominated 45-five member choral group, approaches the end of its 14th Miami season in triumph. Founder and Artistic Director Patrick Dupre Quigley will be directing this weekend’s rendition of Brahms’s German Requiem with two of the world’s most celebrated voices as solo artists. Soprano Tamara Wilson, also known by her moniker, “the hope of all who love Verdi” will perform. Her performance at the Metropolitan Opera last year bought New Yorkers to their feet in a standing ovation. Bass-baritone Dashon Burton joins in with Seraphic Fire as well. Burton sings frequently with the Cleveland orchestra, among many others, both nationally and internationally. The Wall Street Journal recently described his voice as “enormous, thrilling, seemingly capable… (of) raising the dead.”

Both these soloists will be performing in each of this weekend’s South Florida venues.

Both singers are also personal friends of Quigley. He has known them for years and been able to linger with them, “witnessing their musical evolution, the growing intensity of their greatness,” he says.

Immediately after the concert, Seraphic Fire and these soloists will take the Brahms work and embark on a first for the group: a three-city tour in New York, Philadelphia and Washington, D.C. Several of these concert dates are already sold out, as interest in home-grown Seraphic Fire spreads far and wide. Small wonder. For years, the choral group has had the largest season of any other national non-church choir. It’s become nationally known due to the popularity of its CDs — the group has released 14, two with Grammy nominations.

Referring to the upcoming Northeast tour, Quigley says, “Many in these communities know us only through our reputation and our CDs,” Quigley says. “They would like to experience us live.”

The German Requiem is Brahms’s own transcription, a reworking for two pianos of his grand orchestral score by the same name. Written in memory of his mother as well as a friend who died, the work is intimate, brighter than one might expect in a requiem. It is consolation Brahms is said to have wished to explore, and not from a divine order. The name of the work was to have been “Human Requiem.”

Just 10 days later, Seraphic Fire will perform another masterwork, the postmodern Steve Reich: The Desert Music, as well as two sorter pieces, one by another of the avant-garde, postmodernist Gyorgi Ligeti, as well as one by Claudio Monteverdi, “who was avant-garde in his own 17th century,” Quigley adds.

Although the Brahms’ soloists will not be present, this one night performance will be a celebration in its own right with Quigley conducting not only his Seraphic Fire but also the New World Symphony Orchestra. It is especially fitting that it is this work that will bring these groups together, since it was founder of New World Symphony, Michael Tilson Thomas, who commissioned the piece from Reich in 1984, years ago before the postmodern composer was heralded as a permanent part of the musical canon of the U.S., as he is today.

“It will be quite a moment,” Quigley says. “Not only for us, but for Miami.”

For here, on stage together for the first time, are Miami’s two premier musical organizations, “peer organizations,” Quigley calls them, “both of them home grown, both with those who founded them still at the helm, both with robust, lasting ensembles.

“I remember when I first came to Miami,” he continues. “Fifteen years ago, the city had a reputation as one with arch conservative musical tastes. But the success of both Seraphic Fire and New World Symphony give lie to that.

“We set out to prove that there was a hunger here for both the traditional and the avant garde. As it was in the visual arts, so it could be in music. Still, our road hasn’t always been easy. Support for the arts is a delicate thing. But in a decade and a half we have been able to develop a wonderfully diverse audience, both in terms of ethnic makeup and age.”
Seraphic Fire will close out its Miami season on yet another note after its North East tour, with one final weekend of concerts in May, these offering the work of William Bryd. It is the contradictions of this British Renaissance composer that intrigued Quigley, as well as the music itself. Bryd, a Catholic, was the favorite composer of his Queen Elizabeth 1, a Protestant, who waged a religious war over her lands, imprisoning and finally executing her cousin Catholic Mary, Queen of Scots, and burning heretics of the same religious persuasion. Not Byrd. His music was that sublime. Seraphic Fire aims to replicate that exquisite beauty.

What: Brahms: A German Requiem

What: Seraphic Fire and the New World Symphony, Steve Reich: The Desert Music

WHAT: William Bryd: The English Cathedral