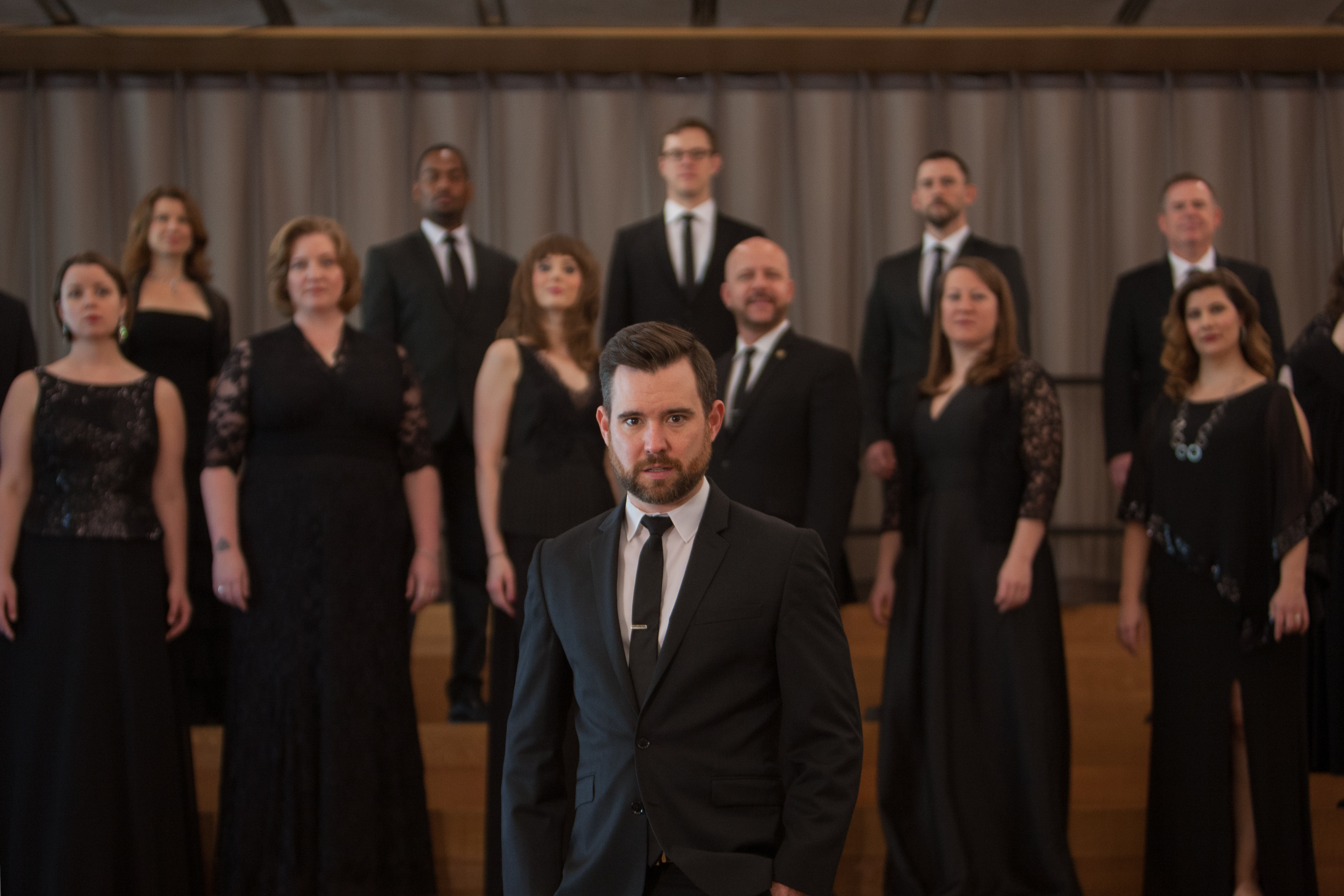 Patrick Dupre Quigley, at center, is conductor and artistic director of Seraphic Fire. He founded the South Florida ensemble in 2002. (Photo courtesy of Southern Land Films)

The South Florida vocal group Seraphic Fire is second-to-none in presenting a wide range of music, from the Gregorian chants of the Medieval era through post-1950 compositions, a period that spans well over a millennium.

But with its inaugural Enlightenment Festival, the ensemble drastically narrows its focus. From Feb. 12-23 in various locations throughout South Florida and Naples, Seraphic Fire will perform notable works by 18th-century masters Haydn, Bach and Handel.

“This festival has been a long time coming for our organization,” says Patrick Dupre Quigley, conductor and artistic director of Seraphic Fire, which he founded in 2002. “In many ways, the forces that we put together are very much ideal for the music of the late Baroque and early Classical period.”

Quigley and Seraphic Fire have been eager for some time to concentrate on these three composers.

“We try to present a very varied season throughout the year. But we were trying to figure out a way to be able to perform more of the music of Bach, Haydn and Handel and their contemporaries, while not having to change our season format, so that we were solely an 18th-century presenting organization,” he said.

“The idea of the festival is to be able to get a little bit more in-depth to the meat of what makes their music have such a spectacular impact across the centuries. Sometimes we listen to music that has a particular time period associated with it, even when you hear it. But the music of these composers really sort of steps across time and national origin, and that’s what we’re hoping to communicate.”

For those unfamiliar with these titles, Quigley offers details and some personal insight on each.

On “Arianna a Naxos”: “This is one of the pieces that exemplifies what was new about music of the 18th century. It’s almost like an opera for individual voice, like a song soliloquy in a way, and Haydn does so much with the expressivity of the female voice. The focus is on one of our long-term members, [mezzo-soprano] Clara Osowski. We’re lucky we get to work with her on a regular basis … she’s just a dynamite interpreter of song. It’s one thing to be an opera singer and stand onstage with a costume on and a set behind you and a full orchestra – there are so many things working in your favor to communicate the idea of what you’re singing. Whereas with song, there’s only the singer, the player and the audience, and when a singer is able to communicate song in the way that Clara does, it’s a riveting, interpersonal experience.”

On the “Wedding Cantata” and “Coffee Cantata”: “As a vocal-instrumental organization that focuses on a lot of choral works, Seraphic Fire often encounters Bach in his ‘sacred’ repertoire. But this program is focusing on Bach’s ‘secular’ repertoire for voice in two instances. One is the solo cantata, the ‘Wedding Cantata,’ which is being sung by Margot Rood, who is a soprano soloist all over the country nowadays, and has been singing with us for almost 10 years. She’s a remarkable Bach interpreter. This is one of Bach’s most-recorded works, so to hear Margot sing it with a period band will be a wonderful thing.

“Bach is approached as a saint in many ways when he approaches music, yet he clearly had a sense of humor. The ‘Coffee Cantata,’ besides being brilliant music written by perhaps the most brilliant musician of the modern age, is also hilarious. It’s an operetta about a father who is very disapproving of his daughter’s addiction to coffee and caffeine.”

On Bach’s “Cello Suites:” “Guy Fishman, who is the principal cellist of Boston’s Handel & Haydn Society, is coming to play three of the Bach ‘Cello Suites’ – the first, second and third – on Baroque cello. When we were thinking about this festival, one of the things I wanted to feature was members of our ensemble who are often not in the flashiest of roles, which usually are people like mezzos or tenors and basses who don’t get the flashy things that sopranos do. Similarly, for our orchestra, the basso continuo line, which is led by the principal cello, is the workhorse of the Baroque orchestra. It plays literally every note, where the upper strings and the winds take entire movements off. And so, we wanted to be able to feature one of our regular cellists, Guy, because he’s such a compelling soloist.”

On Handel’s “Acis and Galatea”: “Handel wrote this piece when Italian opera sort of went out of style in London, so he was having a hard time with the economics at the time. But the music itself is stunningly complex. It has all of the joy and interest that Handel’s English-language oratorios would have coming later, but in such a smaller form. The orchestra is only for two individual violins, two oboes, a cello and bass and harpsichord – it’s a tiny, tiny orchestra because it was probably performed for the first time not as an opera or in a theater, but in someone’s ballroom.”

Quigley – who was born in New Orleans and has degrees from both Notre Dame and Yale – has performed all over the world with dozens of symphony orchestras. But he definitely has a soft spot for Miami.

“I think that we have some of the most warm and loving audiences of any that I’ve encountered anywhere,” he says. “I like that people are so interested here in things that are new and that expand their horizons …

“Often, the music that we’re performing, while it might have been performed perhaps tens or hundreds of times in Boston or New York, it might be the first time getting performed in South Florida. And the enthusiasm with which our audiences and the community have received that – I don’t know that it could have happened anywhere else. It’s a particularly intellectually curious audience, and the community in which we are based has been one of the great joys of Seraphic Fire.”