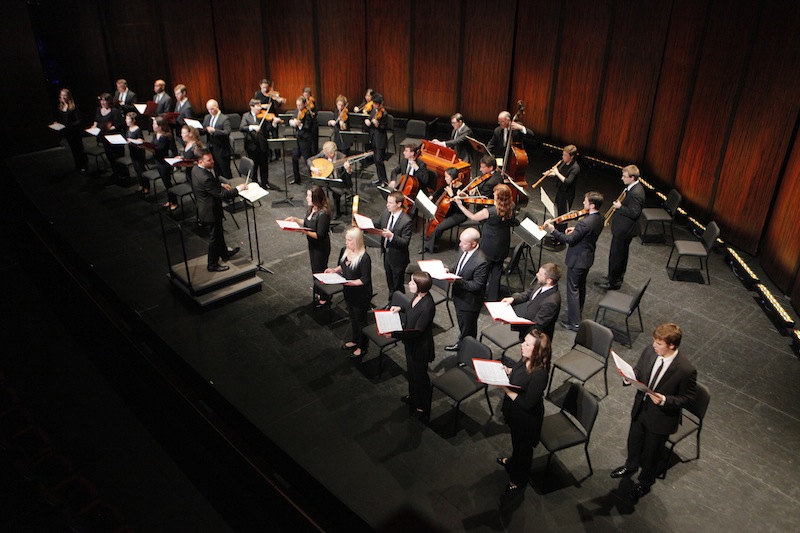 Seraphic Fire, the splendid and ever more celebrated choral group born in Miami, returns this weekend for three presentations of Mozart’s Requiem.

But to call it Mozart’s is to simplify centuries of intrigue that culminated in that Oscar winning Hollywood blockbuster, Amadeus.

Mozart did write the Requiem, but only in part. The composer died without completing the work. He is said to have believed he was writing his own requiem, although technically he undertook it as a commission ordered by a minor noblemen. After Mozart’s death, an assistant, Franz Sussmayr, did his best to finish it as he felt the maestro would have. This was done in secret. But whispers began, until finally the secret was out. Still, ever after when the work has been presented, it has been this Sussmayr version audiences have listened to. Until Seraphic Fire’s founder and artistic director Patrick Quigley decided to make a phone call.

That call was to a young composer, Gregory Spears, who even in this era had not shied away from creating church music. Not only that, Spears had a reputation for marrying exquisite attention to historical accuracy with modern sensibility. Quigley asked him to take on the sacrosanct Requiem, the one Spears himself had sung in a choir as a boy. “It was daunting to say the least,” Spears says.

Spears was alone as he worked on retreat at the home of that quintessential 20th century American composer Aaron Copland. Spears worked on his piano.

Spears took up a liturgy old enough to perhaps be called “timeless.” Referring to that part of the Mass known as the “Angus Deus” (“Lamb of God: He who takes away the sins of the world, have mercy on us”) Spears says, “Think of all the thousands of versions of music that have used those same lines. When a composer picks them up once more, he can hear who he is. One feels all the continuity, and then there is one’s voice distinct.

“I began by working with very little ideas. I took a very short quotation from the Sussmayr version, and layered the quote atop the quote in contrapuntal style. Neither Sussmayr nor Mozart would have ever that done it this way. I was taking a melody from the 18th century and repeating it minimally with a sensibility similar to that of our great modernist composers: Philip Glass, Steve Reich, and John Adams.

“Yes, my sensibility is modern. It cannot help but be. Still, there is nothing that I would call post-modern in my compositions. In my view, post-modernism is full of irony; it flattens history. For me history is not a series of signifiers, but a treasury of sensibilities. If I had to classify my work I would call it neo-baroque.”

Perhaps all this is rooted in the organ music he heard as an altar boy years ago. It was only in church that the composer heard live music during his formative years. “I can still feel the awe I felt then listening to music with so much drama and history.”

Much to Spears’s delight, his work will be performed this weekend on instruments modeled precisely after those from the 18th century. “The violins,” Spears says, “are made from sheep guts, not the metal that we routinely use to make our strings today. There is something about the woods, and the old design and those strings that is connected with the land and history. The instruments themselves feel like messengers connecting us with the past, ‘don’t forget this,’ they say.”

Which brings us back to the Requiem itself for a requiem is a ritual that acknowledges and honors loss. Which, according to Spears, brings us back to melody, whether it is Mozart’s or Sussmayr’s. “It is always disappearing. One can’t hold on to a melody. It is always disappearing; it is gone in a moment. Ah, but the music it makes can be beautiful. “