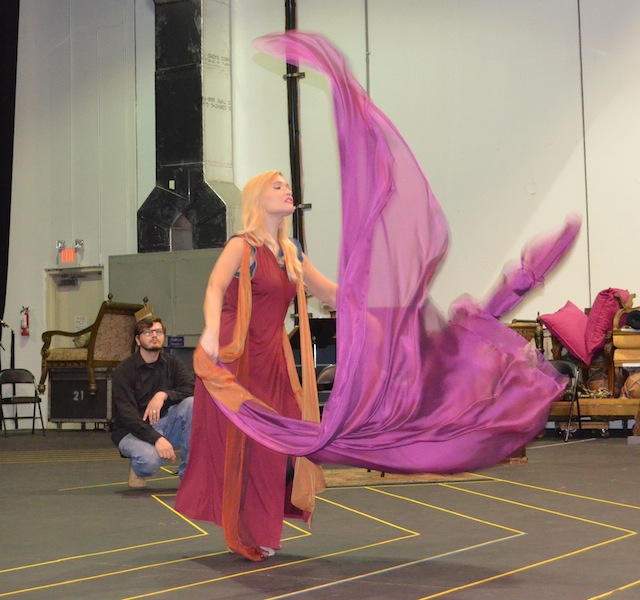 A creepy old king ogles his beautiful stepdaughter. Powerless to stop him, her mother, the queen, protests drunkenly. The girl, age maybe 12 or so, falls for the only man who does not lust after her: a prophet, John the Baptist. When the prophet rejects her, the girl manipulates the king’s desire and persuades him to deliver to her the prophet’s head. As in so many biblical stories, the girl, Salome, is to blame. The Florida Grand Opera production of “Salome,” opening this Saturday, seeks the girl’s salvation.

When asked how the sexual desire portrayed in Richard Strauss’ 1905 opera might resonate today, director Bernard Uzan balks: “I don’t even see the connection between “Salome” and the #metoo [movement].” Describing the court of King Herod and Queen Herodias, Uzan explains, “It’s not a man’s world. It’s a decadent world. They live in a time of total sexual freedom, for the powerful.”

Yet the 73-year-old, Tunisian-born director, who has helmed more than 400 opera productions since 1973, is keenly aware that the rules for how men and women work together in the opera world have changed.

“I don’t know how to behave, because I don’t know how it will be taken,” he says. Once he might have told a soprano: In this moment, I want you to feel the same way you feel when you make love. Now, he regrets, “I cannot say that anymore, because it’s harassment.”

On second thought, maybe this new climate has influenced how he is directing his fourth production of “Salome.” “We have to find a new way of connecting to people,” he observes. “That’s why I do this “Salome” completely different than I did it 10 years ago, because I need to find new solutions.”

Last season at FGO, Uzan took some liberties with the plot of the beloved opera, “Carmen.” He hints that this season’s “Salome” may end with a surprise as well. He asks a reporter to give nothing away, except to say that there may be some salvation for Salome.

“I’m an old man,” he explains. “Maybe I’m looking for salvation too.”

In the role of John the Baptist (Jochanaan), bass-baritone Marc Delavan says that he had not thought about “Salome” in the context of #metoo either. Yet he believes that no teenage girl would be so “hypersexualixed, without tutelage” – whether she was abused by her stepfather or perhaps one of the soldiers.

Delavan has played Jochanaan six times over the past 15 years. How his prophet responds to Salome’s advances depends on the director – and the soprano. For example, he sang in the 2009 Barcelona production that featured the debut in the title role of the Swedish soprano Nina Stemme, now the preeminent Salome of our day. “Nina was all about violent,” he recalls. “So sometimes I would have to take a very low, almost martial arts stance, or she was going to knock me down. She’d get up in my face, and I love that.”

At FGO, Kirsten Chambers, who will alternate in the lead role with Melody Moore, calls for a different response. “She’s a terrific dancer, and her sexuality is very lithe,” he observes. “So I have to stay stationary.”

Delavan calls Salome “a victim victimizing.” He views John as a symbol for standing up to oppression. “He goes out shaking his fist at the world,” he notes, “I applaud the women standing up and shaking their fists and saying no more.”

In the title role, Chambers needed no prompting to make the connection between “Salome” and #metoo. “I have thought about it,” she says during a break from rehearsal. “This is a very relevant story.”

At the opening of the opera, Salome steps outside a family gathering to escape her stepfather’s gaze. “People say, ‘Why are you leaving the party?’” Chambers points out. “But no one does anything.” In this context, Salome’s desire for John makes sense. “She’s looking for spirituality,” Chambers explains. “She wants him, because he’s not looking at her. He does not make her uncomfortable.”

Even the infamous dance of the seven veils conceals as much as it reveals. Working with choreographer Rosa Mercedes, Chambers alternates between displaying her naked body and covering herself from head to toe. The use of the veils is a symbol for women being looked at by men, she explains.

Even the most scandalous moment, when Salome kisses John’s severed head, can be seen in terms of her abuse. “When we talk about the mouth, we’re getting into her sexuality, and how difficult it is to awaken to your sexuality when you’re being looked at all the time,” Chambers suggests. “In the final scene, she says, ‘I thought love would have a bitter taste.’ But, no, it doesn’t. So I think there is some kind of hope in this young woman.”