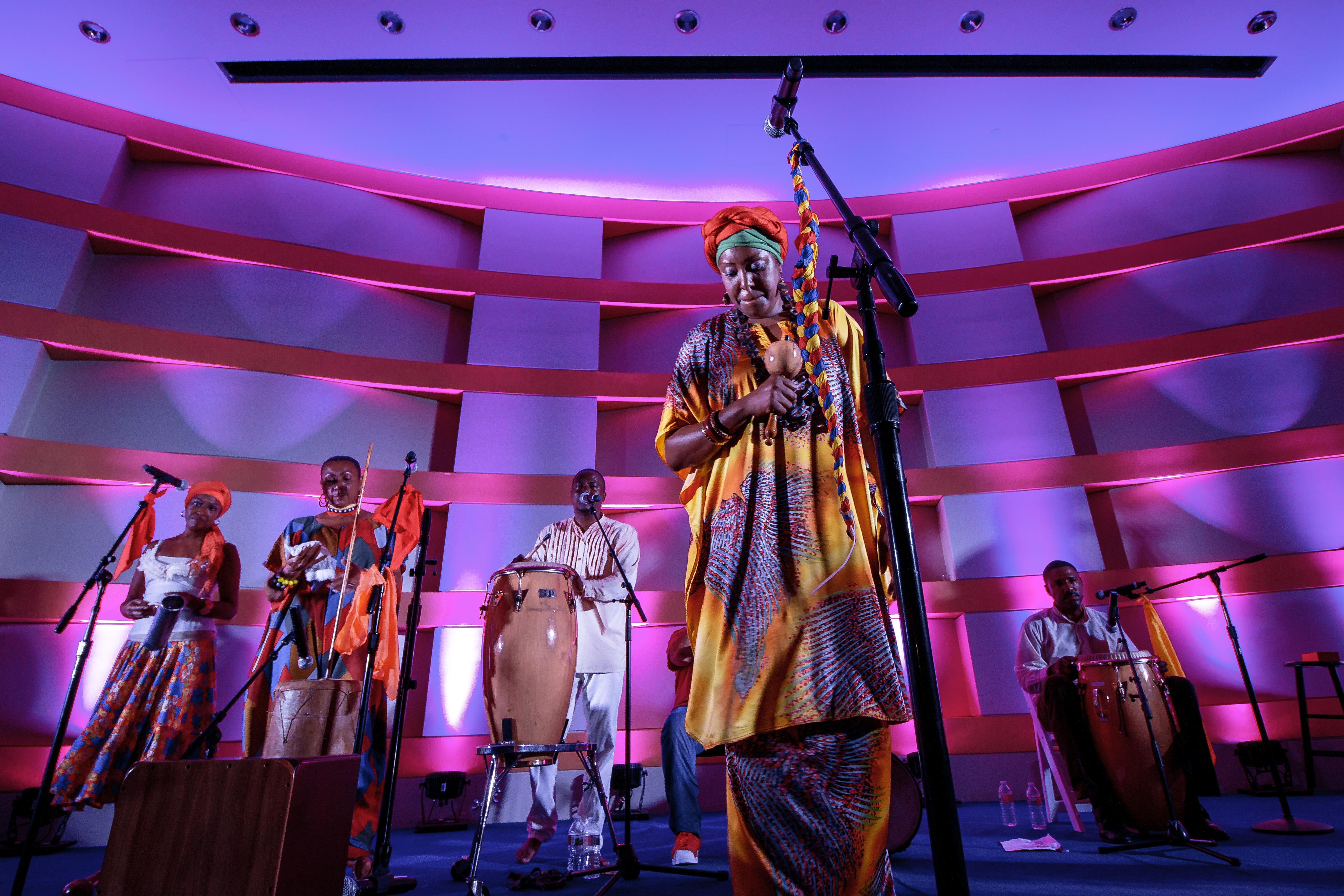 Betsayda Machado and Parranda El Clavo are putting a spotlight on Afro-Venezuelan traditions and music. (Photo courtesy of Luis Acosta)

Countries like Cuba, Brazil and Colombia have long-established the wealth of their musical traditions on the global stage. But the extraordinary variety and richness of Venezuelan music remain largely a secret hidden in plain view, in some cases to Venezuelans themselves.

Betsayda Machado and Parranda El Clavo are helping to change that as they put a spotlight on Afro-Venezuelan traditions and music. They will be appearing in concert March 14 at Downtown Doral Park, as part of the city and The Rhythm Foundation’s joint musical and cultural event, “Ritmo Doral.”

“What people know about Venezuelan music, outside and inside the country, is the ‘joropo.’ That seems to be the one genre that identifies Venezuelan culture, and there is so much more,” says Machado, during a Spanish-language phone interview from the Boston area. The group was there performing and conducting workshops at Brandeis University.

Opening that evening will be local favorites Cortadito and Zona de Bomba. Cortadito is a continuously evolving group, anchored by tres player and founder Jose Elias, that  puts an updated spin on traditional Cuban music. The band has recorded a CD and EP and backed artists such as Cuban singer and guitarist Eliades Ochoa, of Buena Vista Social Club fame. Meanwhile, Zona de Bomba is a six-piece, multinational, voice and drums ensemble whose music is anchored in the Afro-Puerto Rican bomba tradition. The genre, they note in their self-titled debut album, is not “a museum piece” — and they prove that by updating it with fresh, original material.

Machado — who has a degree in business administration because her father, a trumpeter, told her, “You can’t make a living playing music” — is a highly regarded singer often referred to as “The Voice of Venezuela.”

She’s had formal musical training, and her professional career includes: a stint with the respected folkloric ensemble Vasallos de Venezuela; a role as the lead female vocalist in the bolero theatrical show, “En La Vida Hay Amores,” by Cesar Miguel Rondon and Miguel Delgado Estevez; and the release of two albums under her name.

The seven-member, drums-and-voices Parranda El Clavo is a true, up-from-the-roots neighborhood ensemble composed of family and friends. It includes singers, dancers and drummers such as Nereida Machado, Betsayda’s sister and also an insurance analyst; Blanca Castillo, who is a retired nurse, and her firefighter son, Youse Cardozo; Adrian Gomez, who is also a cocoa farmer and storyteller; Asterio Betancourt, who plays traditional drums such as “quinto,” “culo’e puya” and “cumaco;” and Nelson Gomez, with dance and drums.

While Parranda El Clavo is more than 30 years old, it had never recorded or performed outside the town until it was discovered in 2015 by producer Juan Souki, who was working with Machado at the time and went on to produce and manage the ensemble.

“I have great respect for Juan because once he met us, he saw the potential, and we love to bring the audience to El Clavo in our music, and share who we are,” Machado says. “Times are difficult now [in Venezuela] and, after this tour, we are all going home. We all live in Venezuela. But wherever we are, no matter if times are hard, we keep going with our music and energy.

Since then, the group has recorded an album, “Loe Loa (Rural Recordings Under the Mango Tree),” released in 2017, and taken Afro-Venezuelan music around the world.

Machado and her group are no strangers to South Florida. Last year, they spent a monthlong residency with the musical, “Viva La Parranda!” at the Colony Theatre in Miami Beach.

Created in collaboration with Miami New Drama, “Viva La Parranda!” played like a live documentary of the music and culture of their town, El Clavo, in Barlovento, in the state of Miranda, “a town of about 1,500 people,” she notes.

“We are surrounded by jungle, and while we are only two hours from Caracas, we are such a small town that we don’t have a bank or a university. We don’t have much, but talent? We have talent [up to our ears],” she says, breaking into a laugh.

Parranda means “party” but is also the name of a musical celebration, mixing religious and popular traditions, associated with Christmas. Parranda is also the name of the ensemble that performs it. The music, referred to simply as “tambor” (drum), is rooted in African tradition but also informed by Spanish and indigenous elements. The lyrics address everything from religious themes to local events, becoming like a sung newspaper.

“A Venezuelan who doesn’t think of himself as a ‘parrandero’ is not Venezuelan,” says Machado, chuckling. “This is one of our cherished traditions. Venezuela has a calendar of holidays that might start on Christmas but goes nearly all year-round …

“We have a parranda in El Clavo every New Year’s Day. It leaves from my house,” she adds. “Now that parranda involves the whole town of El Clavo. The group that will be performing [in Doral] is just a small representation of the town’s parranda.”