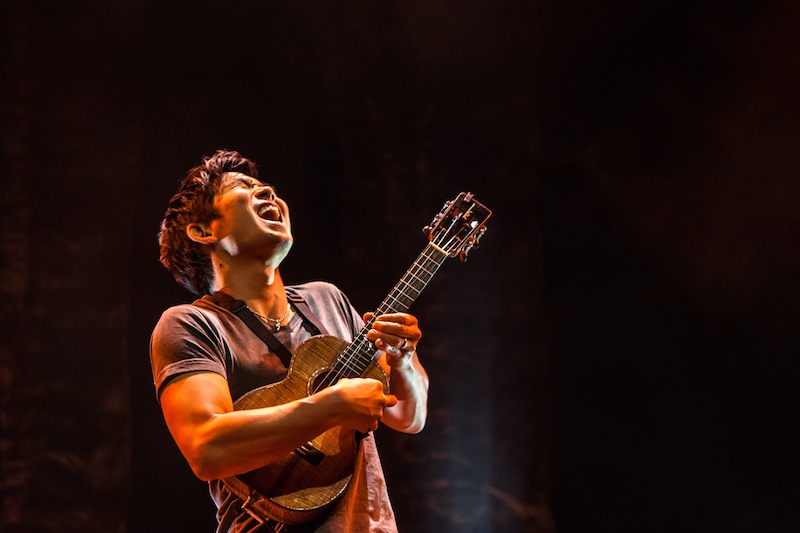 Jake Shimabukuro, the Hawaiian ukulele master, performed on Saturday night, Nov. 14 at the Miami-Dade County Auditorium. Never mind the nearly torrential rains, the place was filled to capacity, or very nearly so. All these folks came out to hear the humble, four-string ukulele? A fair question considering the last time many of us encountered one may have been in some kitschy old movie. Ah, but Rolling Stone magazine calls Shimabukuro nothing less than “a musical hero.” Indeed, Jake Shimabukuro does for the ukulele what Bela Fleck does for the banjo. If not more.

Shimabukuro’s concert, presented by Tigertail Productions, went on for well over an hour. He never took a break. For most of the evening Shimabukuro was accompanied by electric bass player Nolan Verner. Sitting in the audience, one had the feeling, all too rare, that one was witnessing something extraordinary.

Shimabukuro’s virtuosity has been touted far and wide, but that may be secondary to the degree of his musical inventiveness. For instance, in his hands, a traditional Hawaiian folksong became in turns rock, swing, then bluegrass. George Harrison’s classic, “While my Guitar Gently Weeps” became blues worthy of an old timer from the Mississippi Delta. This sort of musical discovery happens again and again in nearly every song Shimabukuro took on. Whether the tune was a pop classic like “Bohemian Rhapsody,” a Japanese folk song, or work from his newest album Traveler, in the hands of this ukulele virtuoso, musical compositions fell out of easy categorization to become always more.

Notes of heartbreaking poignancy could be followed by riffs reminiscent of Paul Simon or Elmer Bernstein, before becoming straight ahead rock and roll. Shimabukuro is able to find what is at the heart of a composition and then play out that heart in all the musical idioms it can speak.

At least as astonishing is the speed with which Shimabukuro can segue in the same song between musical genres. Sometimes his bridge is a single chord.

There’s still more. Shimabukuro manages to hold up a prism coaxing his ukulele into sounds that might come from bells, a violin, a harp. At times he seemed to be letting his audience hear what it would be like if he were playing through water.

Shimabukuro has a reputation for strumming with “exuberance.” Indeed, besides praising him for his musical heroism, Rolling Stone describes him as the “one of the hottest axe men of the past few years.” After Saturday night’s performance it is easy to see how comparisons with Hendrix and Clapton can be made. More than one person in the audience could be heard wondering why the ukulele didn’t just explode. Shimabukuro’s hands often moved faster than the eye could see. At one point he was strumming the fret as well as the strings. The audience was cheering, and Shimabukuro was having at least as much fun, jumping, stretching, bouncing around like a delighted kid, playing games with his bass man. “Top this,” Shimabukuro might have been saying.

But the bass man knew better than to try. What he did instead, indeed what he did throughout his time on stage, was to complement Shimabukuro, to frame his music and to hold it in warmth.

All in all, it may have been the sweetness of Shimabukuro’s playing that made the evening most remarkable. This was sweetness with not a trace of the saccharine. His rendition of “Somewhere Over the Rainbow” made one believe again in wishes, if even for a moment. Better still, at least for this reviewer, was his rendition of a Japanese folksong, a story about cherry blossoms often played on a zither. Shimabukuro’s song was wistful, soft as a sigh.

Lighting added to the evening’s sense of place and wonder. Shimabukuro is of modest stature; sometimes his shadow filled all the auditorium’s walls. More often ukulele and bass player stood on a stage lit only by what might have been candles.

For all his showmanship and virtuosity, for all his rock and roll chops, this was a musician inviting his audience in far closer than most, for an intimate, exhilarating evening.