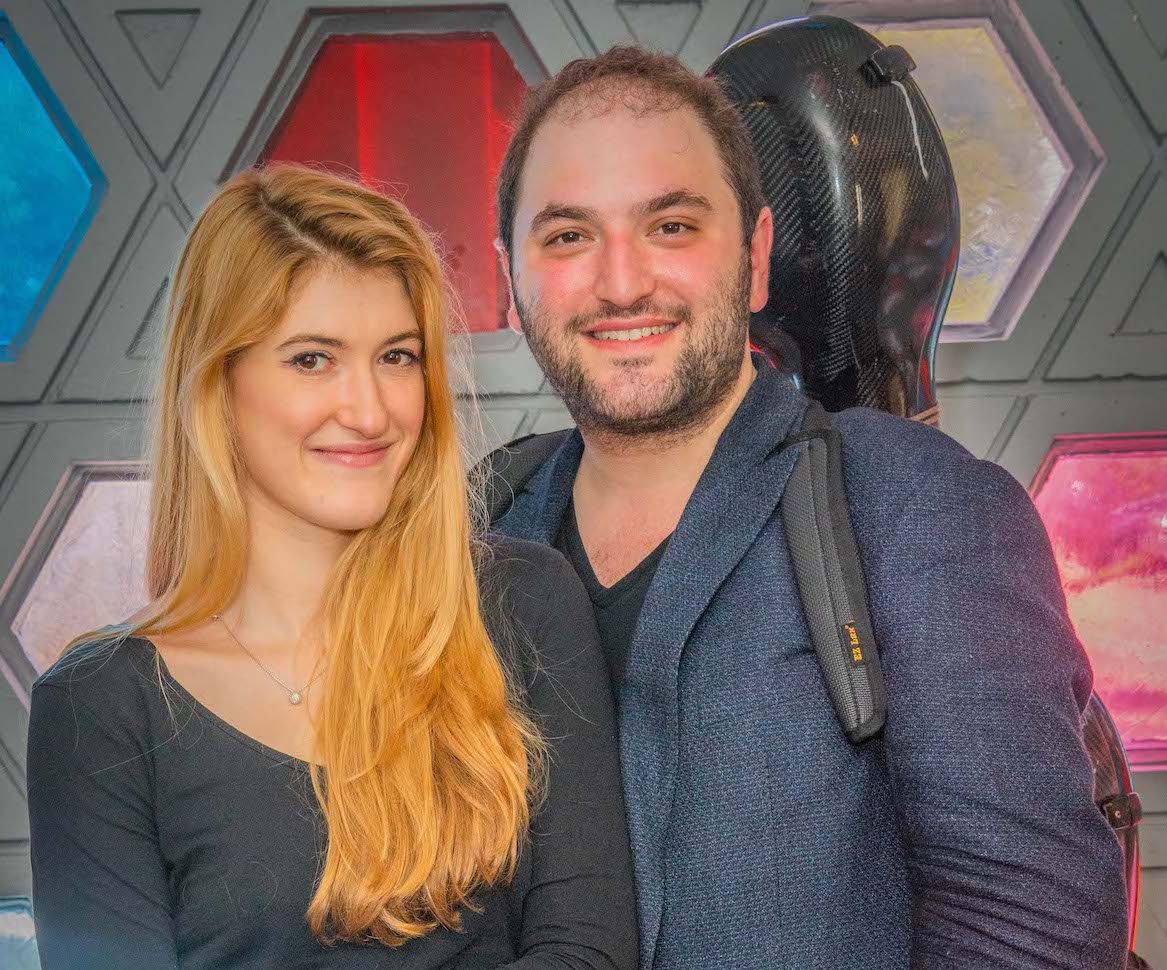 Although Schwarz headlined the performance, important to the strength of the Sunday recital was pianist Marika Bournaki, Schwarz’s fiancée and an accomplished pianist on her own. The performance took place in the temple’s intimate Gumenick chapel, with its gorgeous, sculptural windows in scarlets and indigoes (designed by Ken Treister, the architect behind the Miami Beach Holocaust memorial).

The program opened with Robert Schumann’s three “Fantasie Stücke” (“Fantasy Pieces,” Op. 73). The first movement, usually dreamy and expansive, came across two-dimensional and flat, but with the more playful second movement the communication between the performers strengthened. Schwarz and Bournaki capitalized on the third movement’s opportunities to play with the tempo and terrifically balanced the more driving dominant theme (the piece is labeled “mit Feuer” — “with Fire”) with the plaintive subtheme. The dynamics of the chapel were passable, though as the volume increased, the same odd angles that make the space sculpturally interesting washed out musical nuances.

Following the Schumann, Schwarz addressed the audience and announced departures from the published program, which included, sadly, eliminating Claude Debussy’s “Sonata for Cello and Piano in D minor.” Rarely heard works by Stutschewsky took its place.

Brahms’ “Sonata No.1 for Cello and Piano in E minor” (Op. 38) was next up, and what followed was the most Schumann-sounding Brahms this reviewer has ever heard. When he addressed the audience, Schwarz said his enjoyment of the piece derives from the attention Brahms gives to the cello’s gorgeous low register. That certainly was the case, but in the intimacy of the chapel with its tricky acoustics, the cello’s part often drowned out the piano. Also jettisoned was the first movement’s measured call and response between the two instruments. The first movement reads “allegro non troppo” (brisk but not too much), but the two compressed it to 11 minutes, where the majority of recordings of the first movement peg it at 15. The faster tempo did not improve the experience of the piece.

Apparently, the second and third movements of the Brahms, though listed, were also not part of the program, because the two transitioned to two very brief works by Swiss composer Anton Webern (1883-1945). First up was the neoclassical “Two Pieces for Cello and Piano” (1899) originally composed by a 15-year-old Webern to perform with his mother (who was a pianist). Although pretty, the piece is mainly of historical interest as one of Webern’s first attempts at composition, and Schwarz and Bournaki performed it competently 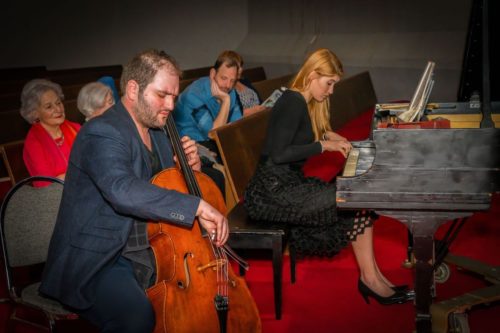 This was followed by Webern’s even shorter and much more interesting “Drei kleine stücke” (“Three small pieces”), Op. 11, where the composer presented for the first time a piece for cello that employed the 12 tones of the chromatic scale, an approach to composition Arnold Schoenberg (with whom Webern was a frequent correspondent) would organize formally a decade later as 12-tone technique. At nine-, 13- and 10-measure lengths, respectively (at a total playing time just over two minutes), the three pieces are supershort compositions for cello that still show off the instrument’s virtues — pizzicato, false harmonics, and glissandi show up everywhere. On Sunday, if the third piece of the Schumann (“mit Feuer”) resembled two singers belting out a song, the effect here was of an engaged, brainy conversation in which the piano and cello presented counterparts, the piano laying out a descending motif as the cello ascended.

Arrestingly executed by Schwarz and Bournaki, the Webern selection provided a terrific setup for the afternoon’s discovery: two pieces by an early member of the Viennese Kolisch String Quartet (famous for early performances of Webern, Berg and Schoenberg), Ukrainian-born Joachim Stutschewsky (1891-1982). Stutschewsky heralded from a family of klezmerim musicians, and the first piece, “Legend” (1952), reflected that heritage, the two movements gorgeously structured around Hasidic folk motifs. “Freilachs Tanz Paraphrase” also adopted folk colorings but deconstructed them, placing in conversation Stutschewsky’s dedication to Schoenberg, on the one hand, and to Jewish folk music, on the other. It was terrific.

After these surprising pieces by Webern and Stutschewsky, Ernest Bloch’s “Meditation Hebraique” (1924), though managed well by Schwarz and Bournaki, lacked the conceptual shine of the previous pieces.

Erich Korngold’s “Four Movements From the Music to Shakespeare’s Much Ado About Nothing” concluded the performance. Originally composed in 1918 as 14 works that accompanied the play’s performance, Korngold extracted from this incidental music four movements for solo violin. Schwarz’s own arrangement for cello made this rarely performed piece available on Sunday, and it worked brilliantly, especially the extended third movement, “Scene in the Garden.” Ending on such a bright note brought an appreciative audience to its feet.