Review: Frost Percussion Group in the category of world-class ensembles

Although Steve Reich is acclaimed as one of the most performed living composers, one does not often hear his music played in Miami. Part of the reason likely lies in its high-performing demands.

The Frost Percussion Group courageously tackled this and many other challenges in a well-attended performance Feb. 5 at the University of Miami’s Gusman Concert Hall. The group’s student members belong to UM’s Frost School of Music percussion studio, led by Svet Stoyanov, whose matured career calls for admiration.

The ensemble consists of 15 male and one female virtuoso who demonstrated passion through every note of the well-curated repertoire. With fine dramaturgical changes, the percussionists alternated in their chamber and solo performances of some monumental pieces composed between the 1980s and mid-2010s, including works by Iannis Xenakis, Roger Reynolds, Steve Reich, Alejandro Viñao, James Wood and Andy Akiho.

Three large chamber music pieces stood out as pillars denoting the beginning, middle and the end of the concert: two quartets by Viñao and Akiho, and a sextet by Reich. These illustrated the group’s musical and performing potential, making this concert a highly rewarding experience for the audience.

The first part of the concert was framed with two newly composed quartets. The concert opened with a long-awaited piece, “Stress and Flow” (2018), by Viñao, who is one of the most popular composers for percussion today. His affinity for rhythmic and timbral explorations between live percussion and electronics seized the audience from the opening notes of Antoni Olesik’s resolute bass groove, which were followed by Kosuke Matsuda, who amplified the sonority of two marimbas. 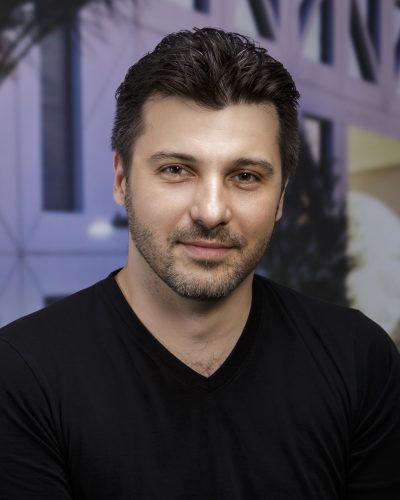 In the first movement, “Bright and Dark,” Stoyanov and Noel Holloway masterfully accomplished a fine timbre and articulation on vibraphones, making every note sound clear yet warm, often contributing to echo effects. Owing to the complexity of such a chamber performance, the performers appeared highly attuned to one another, and perhaps even more so to the invisible “fifth member” of the group – the track. One might wonder if Viñao’s music might present itself to the audiences as a well-kept secret that only the players are aware of intimately; a braid of complex rhythms and grooves bouncily passed between the players. The intricate architecture of the piece came to life in a fascinating choreography of musical ebbs and flows.

The diptych of two Xenakis pieces followed as a sort of baroque prelude and fugue. “Rebonds B” (1987-89) for a solo percussionist displayed many expressive and dynamical shades under Katherine Fortunato’s interpretation. Making a clear dialog between high and low register of the percussion set, she unified the contrasting timbres and promptly shifted between soft dynamics and powerful accents in unexpected situations.

“Okho” (1989) demands for complete control over the motif that transfers between performers, often in unisons. Nathan Coffman, Victor Sintchak and Dominic Grande had their ears wide open during another extensive Xenakis piece. Their performance was well thought-out with carefully executed equal accents. By the end of the piece, they successfully conveyed the dynamical and dramaturgical crescendo to the audience.

“Islands from Archipelago II: Autumn Island” (1986) by Roger Reynolds followed as a long sonic rest before the actual concert intermission. The audience could witness Matsuda’s extraordinary memory, holding every notated detail of this melodically extensive and fragmented piece. Alone with his marimba under the beam of yellow light, Matsuda created a pointillistic musical monodrama. Every melody was brought as a flickering luminosity that would appear up and down the marimba’s keyboard, depicting the imaginary landscape of this introverted musical experience.

“Pillar IV” (2016) is the second most recent piece from the repertoire, and the second dramaturgical column of the concert. Akiho uses a plethora of melodic-rhythmic resources within a repetitive phrase by continually adding more elements in an enthralling crescendo. Timbral resources include found objects such as a selection of glass bottles. With complete control over complex rhythms and excellent communication, Andrew Riley, Guillermo Ospina, Joseph Pazanowski, and Conor Mulford exhibited great attention to detail with authority and precision. Riley’s groove on the bass drum anchored the ensemble in various moments. The quartet exhibited a masterful control over the projection of sound in the hall; a feat generously rewarded by the audience.

The second part of the concert, too, was designed as a diptych with one solo and one chamber work. Holloway performed “Rogośanti” by Wood, a composer well-known among the lovers of percussion music. In this piece, Wood evoked tribal ritualistic elements through singing and playing multiple membranophone instruments and a gong. Holloway immersed himself in the music, delivering a highly nuanced performance.

However, “Rogośanti” was just a prelude to the pinnacle of the event: Reich’s “Sextet.”

When introducing the piece, Stoyanov presented Reich as a champion of percussion. In “Sextet,” Reich kept experimenting with repetitive pulses in piano and keyboards (with piano and organ sound) contributing to the timbral variety and register depth. The keyboard organ sound evoked the taste of an early Reich; the composer’s retained arch form from previous compositions did, too, in which the motif often transforms through constant addition and subtraction of notes.

Cristian Zavala, Evan Saddler, Colin Williams, Ospina, Riley, and Tony Kirk delivered an engaging performance of the musical material’s growth and decline. The slow middle movement unveiled an exceptionally lyrical contrast with effective long mystical bowed vibraphone sonorities. After the gradual crescendo and an impeccable resonance of resulting patterns, the concert culminated with the final bars of “Sextet,” which caused the audience to erupt in standing ovations for the Frost Percussion Group.

Handling such a gigantic repertoire, the Frost Percussion Group demonstrated fine and skillful musicianship – which qualifies it to enter the category of world-class ensembles.