Review: Cellist Throws Everything Into the Mix — and Then Some 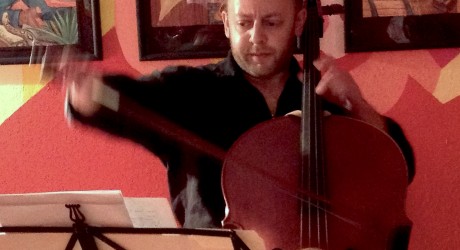 The audience knows it’s in for a wild ride when the soloist says he hopes he won’t need resuscitation after performing the second piece on the program. He didn’t, but the warning proved apt. Jason Calloway, a Juilliard-trained cellist who performs on world-class stages and international festivals with The Amernet String Quartet, is unafraid of high-wire challenges. His recent concert at Howard Golen Gallery in Wynwood explored the relationship between the cello and the human voice — literally and metaphorically. This is the second season of composer and music presenter Juraj Kojs’, Acoustica 21 series. Calloway shares Kojs’ and Golen’s commitment to showcasing innovative music in Miami. He introduced each piece with valuable thematic and technical remarks. Not everyone knows their spectralists from their serialists. Everlastingly Loose and Responsive: A Study in Motion (2010) by composer Anne Hege, was that “dangerous” second piece. It demanded rapid sequences and juxtapositions of whistling, playing the instrument and singing. It also required Calloway to strike widely dispersed notes with no harmonic or melodic cues. This pushed the musician to his limits, particularly, as he complained, he is not endowed with perfect pitch. The sung and whistled notes and phrases were sometimes concordant and sometimes eerily dissonant with the cello. The young musician exhorted students in the audience to keep up their voice exercises. (Think: eat your spinach.) The tempo was not relentlessly breathless, but the musician’s concentration and physical strain were evident, as the music created sonic ambiguities that provoked questions about the very act of listening. As Calloway later remarked, “For me, it’s a personal challenge at a technical level and a piece that people seem to enjoy that provides a contrast with what came before and what followed. The cello part is elementary at best, but it’s amazingly difficult to play in tune on the cello and to sing in tune simultaneously and to sing a vocal part whose range encompasses from baritone to low soprano.” For decades, many composers have eschewed the folk, popular and romantic standards of harmonic and melodic beauty, choosing alternative systems of arranging sounds — whether acoustic, electronically generated or sampled. But the cellist’s programming goal was not to catalog or demonstrate those academic “isms” of compositional style. “My only objective, after what I thought was a sensible theme [voice and cello], was to construct a program that would provide variety,” Calloway said. In that, he certainly succeeded. Other selections included works by Peter Sculthorpe, Luciano Berio, Fabien Levy, and Artur Avanesov. Adriana Holszky’s Nouns to Nouns is based on an e e cummings poem and carries his language play into the sonic world. The music mixed languid and frenzied tempos, demanding rapid jumps between the extreme ends of the fingerboard, contorted chord fingerings, long glissandos, interspersed with raucous scrubbing, slapping, note bending, muffling and simultaneous plucking and bowing. The Berio piece, Les mots sont allés, was Calloway’s most relaxed performance. It’s one he’s done many times; he’s internalized all the notes, markings, and other “micro details,” he explained. “I’m at a point where I can let go and enjoy myself.” So could the audience.   Since 2007, Juraj Kojs, founder of the Foundation of Emerging Technologies and Arts (FETA), has presented in such other Miami venues as the Bass and Miami Childrens’ museums, Inkub8, Florida International University, O-Cinema, The Bridge and Sweat Records. Besides the ongoing Acoustica 21, Kojs also presents a 12 Nights of Electronic Music and Arts series. Other collaborations will bring him to Miami Theater Center (MTC), Vizcaya Museum during Art Basel, and to a Venice palazzo in the spring. Calloway is accustomed to large concert halls. He relished this close interaction with his audience, and for this adventurous program, rich in sharp contrasts, it seemed quirkily appropriate that the musician, seated at the rear of the gallery, was flanked by lurid pulp fiction cover paintings of galloping horses, gunslinging cowgirls and a house afire. At the front of the gallery, the Kawaii Universe pop-up shop presented sticker art and other anime-inspired creations. Somehow, it all worked. On Sept. 20, the 12 Nights concert features Xenia Pestova, on piano and toy piano; and Scott Wilson on electronics. At the WPAC 150, School of Music at Florida International University, 10910 S.W. 17 St., Miami; 434-284-2985; www.amernetquartet.com; www.fetafoundation.org.