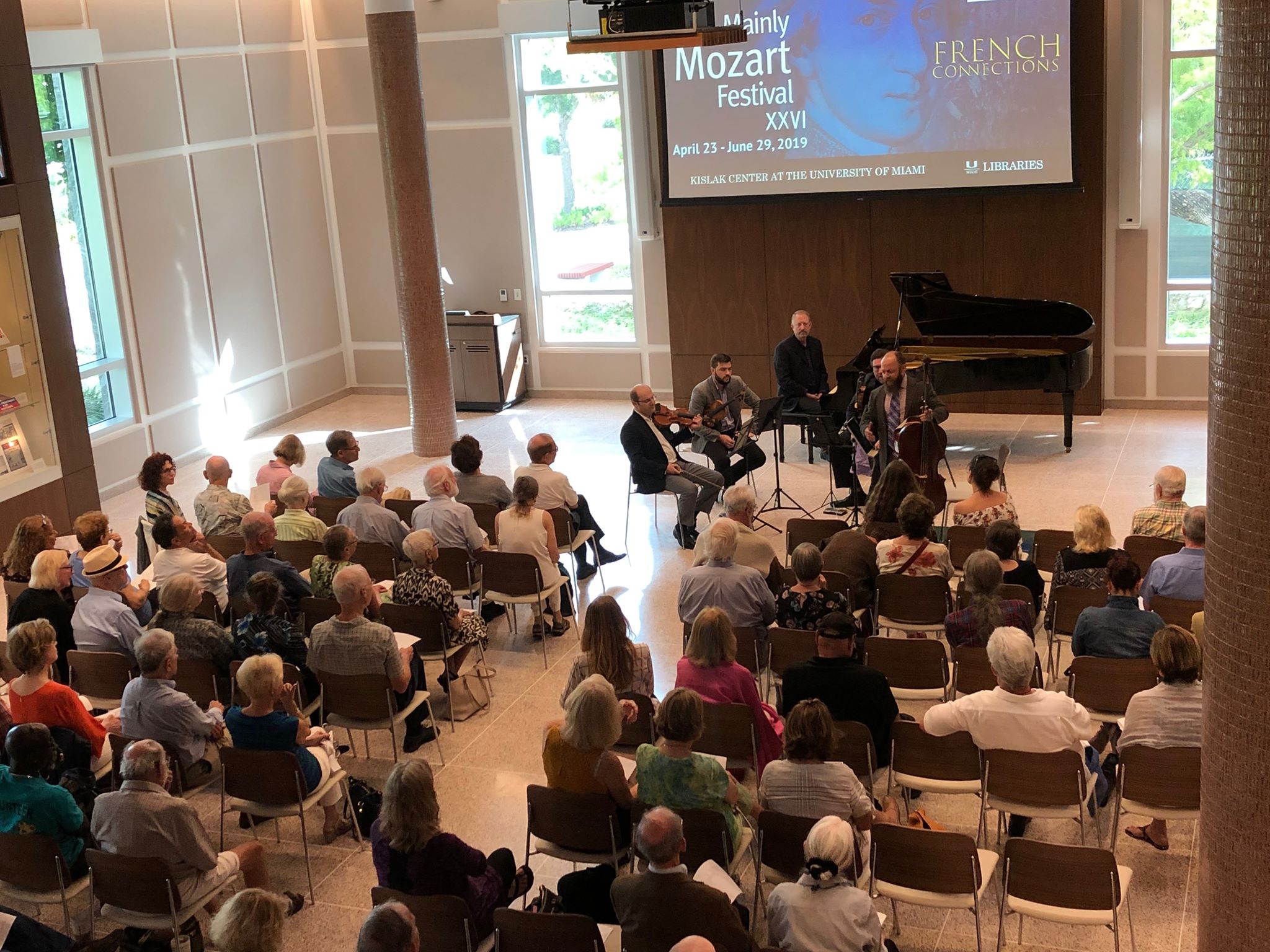 Florida International University’s ensemble in residence, the Amernet String Quartet, electrified with fresh interpretations of classical works in the second program of the 26th season of Miami’s Mainly Mozart chamber-music festival. The afternoon program featured Mozart, Françaix and Elgar at the Richter Library’s Kislak Center on the University of Miami campus Saturday, May 18.

Before the show, a packed audience received the bittersweet announcement that the performance would be violinist Franz Felkl’s last with the quartet, which also includes Misha Vitenson on violin, Michael Klotz on viola and Jason Calloway on cello. With that, the program opened to Wolfgang Amadeus Mozart’s “String Quartet in E-flat Major” (K. 428). The Kislak Center is the newly opened home to UM’s special collections and archives. As a presentation space for rare works (which on May 18 included a 1773 manuscript autographed by Mozart himself), it is stellar. As a performance space for chamber music, its dimensions muffled the sound.

Still, the performance of the “String Quartet in E-flat Major” was a powerful reminder of the value the Mainly Mozart Festival brings to Miami’s classical music scene with well-thought-out programs featuring gorgeous and historically important works. The festival continues through June 29.

Composed in 1783, the “Quartet” is the third of the “Haydn Quartets,” a set of six string quartets Mozart wrote between 1782 through 1785 while in Vienna. He later dedicated the collection to Haydn and set off generations of scholarly debate on his motives for doing so. Many of the Mozart quartets possess suggestive references to six string quartets composed by Haydn in 1781 (Op. 33, the “Russian Quartets”), but the precise relationship between the sets of works remains unsettled.

For instance, the fourth movement of the quartet played by Amernet on Saturday echoed the “Scherzo” movement of Haydn’s E Flat Major Quartet (titled “The Joke”).  However, where the humor of Hayden’s quartet borders on the sardonic (note the strings at 6:05), the Amernet’s performance accentuated a joyful, teasing Mozart, as Vitenson’s warm timbre highlighted the fourth movement’s minuet form, infusing it with energy and danceability. 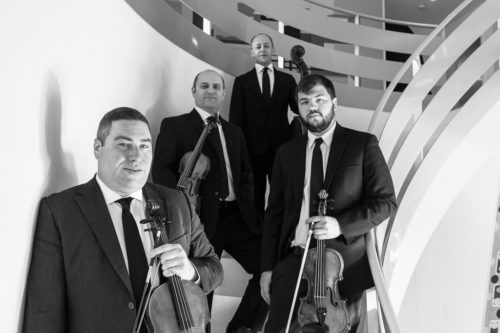 The Amernet String Quartet. Photo courtesy of the group.

Next up was 20th century composer Jean Françaix and his neoclassical “String Trio” (1933). Vitenson, Klotz and Calloway burst out with an incredibly playful, gamelike “Scherzo.” Vitenson’s muscled accents hinted at a satisfying screech in some passages, and the three pieced together a gorgeous pizzicati bridge in the movement’s middle section. They sustained surprising clarity throughout the “Trio” despite the wicked tempo of the first, second and fourth movements — the fourth movement’s breakneck speed has been called chamber music’s cancan.

But it was during the third movement’s “Andante” where their carefully crafted performance — clear but not austere — broke through the clutter and presented a fresh interpretation of this sweetly mournful movement as the equal of the overly caffeinated other three.

After an intermission, the program closed with Edward Elgar’s “Piano Quintet in A Minor” (Opus 84). For this final piece, they were joined on piano by Michael Linville, chair of chamber music at the New World Symphony.

Before the performance, Klotz recounted the story behind the work’s composition. As the tale goes, Elgar produced the moody quintet on a holiday sojourn in Sussex inspired by a local tale about Spanish priests who morphed into a grove of trees after committing acts of sacrilege. Critic Ernest Newman — to whom Elgar originally dedicated the work — argued that the story lurked as the quintet’s “quasi program.” The story is fabricated nonsense right down to the Spanish priests, but undoubtedly Elgar let it ride because it lent the quintet some mystique.

Ghosts aside, Amernet’s performance of the Elgar piece brought it to life and made it relevant in a way that the current recordings of the work do not. It was spectacular.

For instance, in the first movement, Linville laid down the slow, emotionally neutral four-note theme, repeating it against insistent thrusts in the strings. This initial theme haunts the first movement, and in some recordings the effect can be austere and even a little pompous, but the performance of Linville and the Amernet musicians showcased nuanced and inventive exchanges between the instruments. Strings and piano breathlessly blended only to have the piano shift noticeably below to support the strings’ build of the melody. Later, during an extended variation in the strings, the piano suddenly slipped through with the theme.  The communication between the five musicians made this final piece the highlight of the afternoon and brought the audience to their feet.

The festival’s remaining performances will take place at the Richter Library’s Kislak Center on the University of Miami campus June 1, June 8, June 15 and June 22. The festival’s finale, “Rehearsal in Paris,” will be performed June 29 at the Knight Concert Hall at the Adrienne Arsht Center for the Performing Arts. Go to ArshtCenter.org or MainlyMozart.com.