Review: A two-evening concert or a cosmic trip? Yes 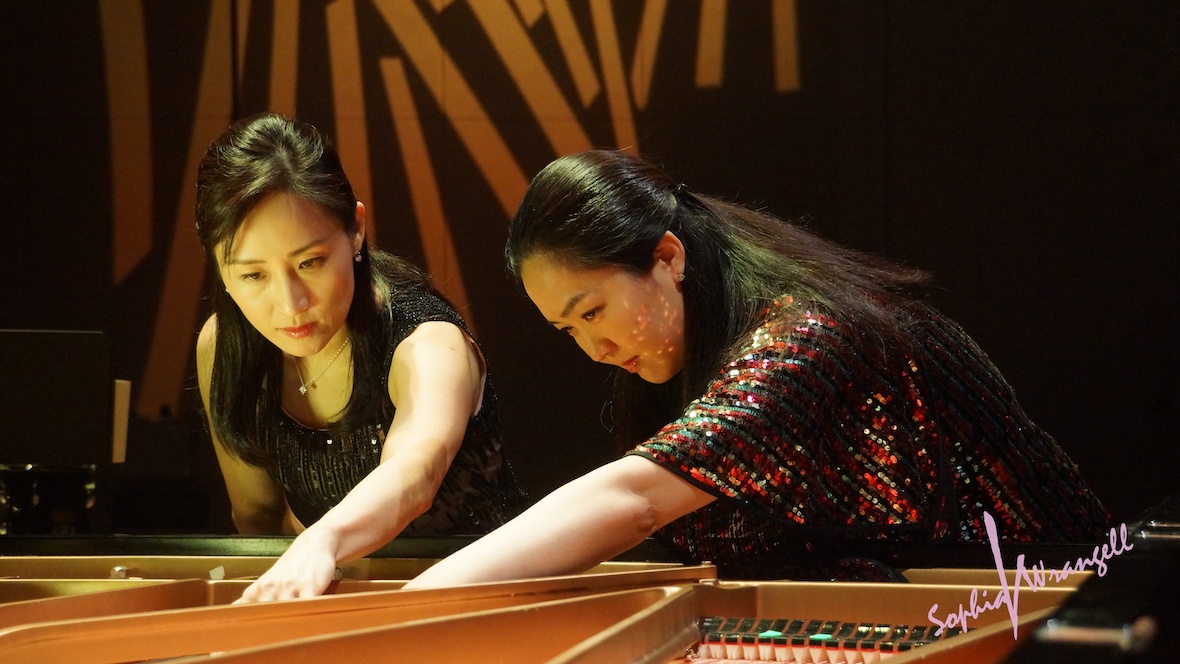 Standing with his left hand on the keyboard and his right hand deep in the piano’s well, Dan Sato first rapped on the instrument’s frame, then alternated between playing a chord and plucking the vibrating strings. He bent over the music rack and moaned as part of “The Phantom Gondolier (Scorpio),” the fifth movement of composer George Crumb’s first volume of the “MAKROKOSMOS” cycle.

Electrifying, Sato completed the movement, then traded places with pianist Sophia Pileggi for “Night Spell I (Sagittarius).” Like Sato, Pileggi began with hands deep in the piano, strumming two of its strings, banjolike, before tom-tom drumming the frame with her palm while whistling a long, low note.

On April 28 and April 30 at the University of Miami, Kaleidoscope MusArt — a Miami-based not-for-profit dedicated to emerging composers and performers — presented a complete performance of “MAKROKOSMOS,” Crumb’s four-volume work for piano and percussion. Presented in honor of the American avant-garde composer and percussionist’s 90th birthday, the two-evening concert marked the first time the sound cycle had been performed in its entirety since the work’s June 1980 debut.

The opening program was performed at the university’s Victor E. Clarke Recital Hall and included the piece’s first two volumes, composed in 1972 and 1973, respectively, and both titled “Twelve Fantasy Pieces for the Zodiac for Amplified Piano.” Seven pianists — Natsumi Ikenaga, Emiri Nourishirazi, Dan Sato, Sophia Pileggi, Larissa Soboleva, Jacob Mason, Andrew Rosenblum and Eunmi Ko — rotated through the two sets of 12 pieces with titles such as “Proteus,” “Crucifixus,” “The Magic Circle of Infinity” and “The Litany of the Galactic Bells.” The composer pairs each work with a sign of the zodiac, and composed the score of every fourth piece in the form of a circle or a spiral, cross or peace sign that was projected above the stage.

Many of the musical effects prominent in the work are part and parcel of avant-garde music that can gut an audience when employed by less capable composers. For an audience of 30 on Sunday and more than twice that on Tuesday, pianists sang, chanted and whispered and keyed notes layered with sheets of paper or laced with fine metal chains, while percussionists blew across open bottles, stroked xylophones with a cello bow and rattled wind chimes made of shells. 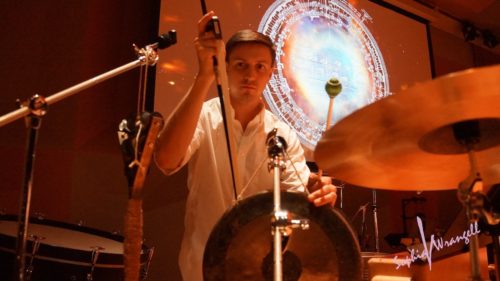 Both evening performances were prefaced by lectures contextualizing Crumb’s music cycle for the audience — on Sunday by composer Ermir Bejo and Tuesday by Dorothy Hindman, a composer and associate professor of music composition. Although both talks were thought-provoking, Crumb’s work is surprisingly accessible, integrating chance noise motifs to erect a carefully calibrated musical (and theatrical) soundscape.

For instance, the Tuesday program opened with Volume IV and pianists Young Kim and Akina Yura seated together on the piano bench with Maria Sumareva perched along the side. The three then performed four works written for four to six hands with titles such as “Alpha Centauri” and “Gamma Draconis” (names of star systems). Frequently, Yura kept her left hand on a piano string while reaching her right hand between Kim’s hands to play the middle register. Sometimes, both musicians kept one hand on the keyboard and the other fingering the piano’s strings while Sumareva leaned over the instrument palming the strings of the low register or tapping them with an L-shaped pick.

Beyond its charming inventiveness, “MAKROKOSMOS” is a complex, well-thought-out work that actively quotes the classical tradition only to strip it of its aura. Crumb’s title “MAKROKOSMOS” refers to Béla Bartok’s “Mikrokosmos,” a work of 153 piano pieces presented in six volumes. Debussy’s “Preludes” for piano contain two books with 12-character pieces whose titles appear at the end of each piece. The first two volumes of “MAKROKOSMOS” contain two sets of 12 pieces, each dedicated to a friend with their initials appearing in brackets at the end.

But Crumb’s engagement with previous composers goes beyond name games and appears in the notes themselves. Tuesday night’s performance closed with the arresting “Music of the Starry Night.” Pianists Redi Llupa and Inesa Gegprifti sat at facing pianos backgrounded by percussionists Andrew Riley and Lucas Sanchez set in a forest of wind chimes and gongs, kalimba, drums and tubular bells. Projected above the stage was a long quotation from the poem “Herbst” (“Autumn”) by the German poet Rainer Maria Rilke.

The roughly 12-minute piece contains two parts. For the first part, Crumb sourced the slow, simple melody line from the second part of Bach’s D sharp minor fugue from Book 2 of the “Well-Tempered Clavier” (BWV 877, from 2:26). The pianos take up the theme three times only to join the chimes, cymbals and gong in shattering it. The effect was like a Dale Chihuly glass sculpture being repeatedly hammered to bits. Very satisfying.

For upcoming events sponsored by Kaleidoscope MusArt, see the group’s Facebook page or go to KaleidoscopeMusArt.com.