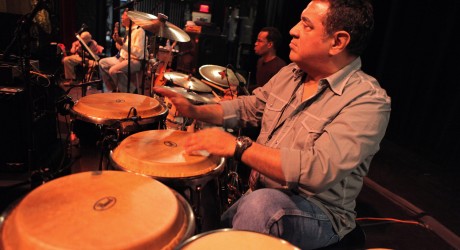 Probably not all familiarity breeds contempt, but as a general rule, performers carefully measure out their appearances in the city where they live. Regardless the quality or the stature in the rest of the world, to be labeled “local musician” is usually problematic when trying to sell tickets at home. All of which makes Encounter. The Concert — featuring pianist José Negroni, drummer Nomar Negroni, bassist Josh Allen, violinist Federico Britos, saxophonist Ed Calle, percussionist Sammy Figueroa, and harpist Roberto Perera — a truly exceptional event. The long list of achievements, both personal and as sidemen, is impressive. It includes nominations and awards at the Grammys and the Latin Grammys (Britos, Negroni, Figueroa, Perera, Calle); and work with musicians such as Miles Davis and Sonny Rollins (Figueroa), Gloria Estefan, Julio Iglesias, Arturo Sandoval, and Rhianna (Calle), and La Sonora Ponceña (Negroni) just to name a few. Also notable, Encounter,  which takes place at the Miami-Dade County Auditorium Friday at 8:00 p.m., was an initiative of the musicians themselves. “Every time we run into each other we say, ‘We gotta do something together,’ but it never happens,” says José Negroni, the producer of the event. He has already produce other events at this hall.  “I play with Ed and Federico, but we’ve never had this kind of get together with everybody. And while we were not born here and come from different places, out of town we represent Miami. It’s as if we are from Miami.” And Negroni underlines another important consideration: in the new economy of the arts, and perhaps especially in music, the artist increasingly has to take on the role of entrepreneur, publicist, and promoter. “The idea that the musician can sit by the phone and just wait for the phone to ring while the record company does the promotional campaign doesn’t work anymore, if it ever did,” says Negroni, who for 10 years was the director of Sony Music Publishing. “No matter how good you are as an interpreter, today you have to work it.” Britos, who in a long career in which he has participated in countless ensembles of various styles, winning five Latin Grammys and one Grammy, agrees. “This was a great initiative by José. And to be truthful, the idea of putting on a concert is really exciting,” says Britos. “Nowadays waiting for a  producer to call is pointless, so why not?” The program will include solos, duets, trios, and finally the septet. “We are not planning a repertoire of just pure jazz,” underscores Negroni. “It will be a broader repertoire, there will be jazz, Brazilian songs, danzones. The idea is that anybody could enjoy it.” Encounter: José Negroni, Nomar Negroni, Josh Allen, Federico Britos, Ed Calle, Sammy Figueroa, and Roberto Perera perform on Friday, Feb. 7 at 8:00 p.m., at the On.Stage Black Box theater of Miami-Dade County Auditorium, 2901 W. Flagler St., Miami. Tickets: $37 plus services and taxes; 877-211-0850 or Ticketmaster.com. Photo of Sammy Figueroa