Puerto Rican singer and activist iLe (Ileana Mercedes Cabra Joglar) has an impassioned intensity and fierce attitude, a fearless radicalism that is meant to be contagious. (Photo courtesy of Cesar Berrios)

Fresh off of sold-out shows in New York and Boston, Puerto Rican singer and activist iLe (Ileana Mercedes Cabra Joglar) will bring her signature sound to the North Beach Bandshell this Friday.

Her 2016 debut album, “iLevitable,” won a Grammy Award for “Best Latin Rock, Urban or Alternative Album.” NPR called her second album, “Almadura,” “an ode to Puerto Rico, an homage to its history and a plea for political action.”

Touring with her nine-piece band, she sings Afro-Caribbean rhythms and boleros with a bite, taking on issues of machismo and patriarchy. Backed by a driving drum section, she uses “bomba” y “plena,” “rumba” and “palo” (traditional rhythms) to address colonialism and Puerto Rican empowerment.

iLe has been a professional singer for nearly half of her 30 years. She began her career as PG-13, the name her brothers Residente (Rene Perez Joglar) and Visitante (Eduardo Cabra Martinez) gave her when she began singing with their hip-hop group, Calle 13. As a child, she studied piano at conservatory, but her grandmother, an amateur songwriter and singer herself, encouraged her to take her singing more seriously.

“I come from a very artistic family,” she said in a telephone interview from San Juan just before traveling to Los Angeles for this year’s Grammy Awards. “We all are aware that art is a very uncertain profession, but it’s very profound. We can learn so much about who we are through art.  It’s a tool that helps us channel everything in life.”

“It’s the type of music where it seems like someone is talking to you and telling you stories,” she said.

Her songwriting can be a very intuitive, instinctual process: “Songwriting for me is opening yourself,” she said. “It’s like letting go of a skin, or a weight, in a way, and forming something else.”

The weight that led to the creation of “Almadura” was anger: anger at the government’s ineffectual response to Hurricane Maria in 2017.

“I think when you’re angry, you let yourself show even more,” she said. “At least for me, it allowed me to let my anger go through the songs, but to try to think of an empowered way to express it … not focusing necessarily only on the problems, but recognizing that we can do something about it.”

The rage she was channeling was felt by many Puerto Ricans, and the rebellion iLe is promoting through her artistry is clearly in full swing. For the last months, the singer has been a catalyst in the street protests that led to the ouster of a governor and energized activists calling for nothing less than independence for the island.

The rhythm of this revolution, in fact, was set to music by iLe, brother Residente and trap singer Bad Bunny (Benito Martinez). Together, the three wrote the song “Afilando los Cuchillos” (“Sharpening the Knives”), which was to become the unofficial anthem of the protests. Together with Ricky Martin and a half-million other Puerto Ricans, they took to the streets of San Juan in July in anti-government demonstrations that eventually led to the resignation of then-Gov. Ricardo Rossello. 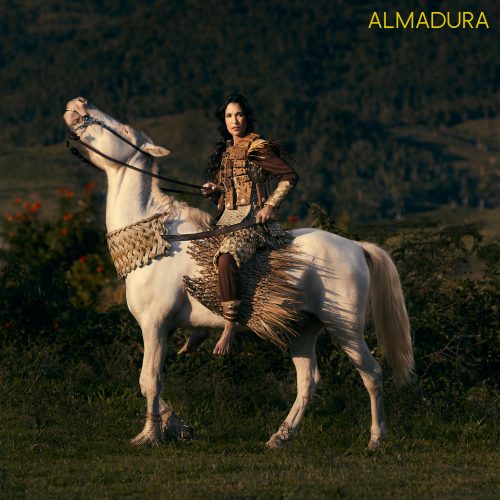 NPR called iLe’s second album, “Almadura,” “an ode to Puerto Rico, an homage to its history and a plea for political action.” (Photo courtesy of Christopher Gregory)

She is optimistic at the new attitude this victory has sparked in her countrymen and women: “We never expected that we could make a statehood governor resign,” she said. “If you said that to me a few months ago, I would say that that would never happen, but it happened, and we did it. We can accomplish so much more than we know.”

iLe has an impassioned intensity and fierce attitude, a fearless radicalism that is meant to be contagious. Her warrior spirit can clearly be felt on “Almadura,” (which means “Strong Soul,” but is also a play on the word for “armor”).

Songs like “Contra Todo” (“Against Everything”) are like a battle cry, calling out the colonialism that has plagued Puerto Rico since Columbus first set foot on the island in 1493 and which persisted with the arrival of U.S. sovereignty in 1898.

Another song, “Sin Masticar” (“Without Chewing”), is a blunt plea to her fellow Puerto Ricans: Change can only happen if they make it happen themselves, she says.

Most of “Almadura” was written with drummer Ismael Cancel, so it’s not surprising that at the heart of many of the songs is a driving percussion section, with Afrolatino rhythms that make it difficult for listeners to stay in their seats.

“It was very important for me to have that drum and that rhythm throughout the songs,” iLe said.

In “Almadura,” she also takes on the old-school “boleros” that her mother and grandmother first introduced her to, but with a contemporary twist. “Temes” (“You Fear”) is a gentle-sounding ballad that is really a full-frontal questioning of machismo. For her, it’s an attitude that is grounded not in strength, but in fear.

“Tu Rumba” (“Your Rumba”), on the other hand, is pure female seduction, with a conga baseline and infectious melody that enter your head like an earworm.

Onstage, iLe savors the connection she feels with her band and her audience.

“I love performing, because it makes me feel alive,” she said. “There’s no going back, you have to enjoy the moment at its fullest.”

Asked where she wants her music to take her, she replied: “I just want it to take me, and that’s it. I prefer to be surprised.”

What: iLe in Concert, with opening set by Dracula