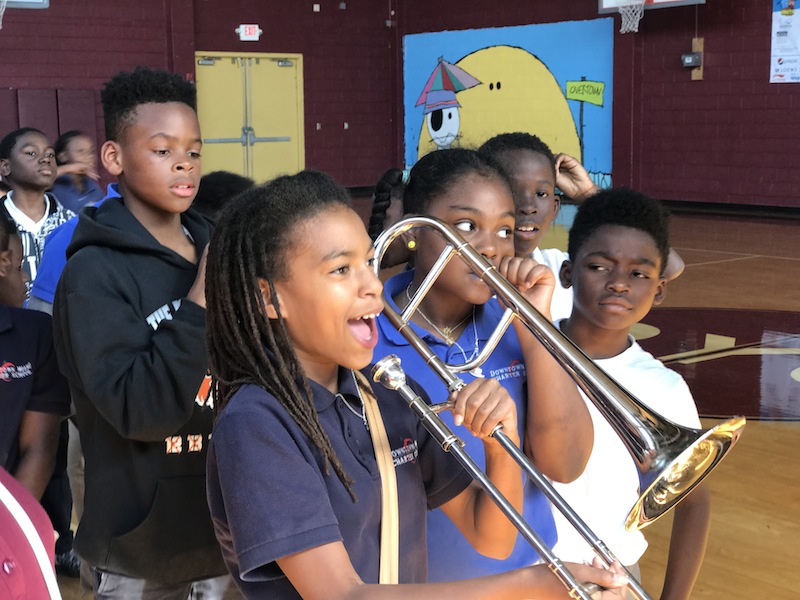 Project 305 has a simple aim – crowd-source a Miami symphony. For 100 days from January 31 to May 12 New World Symphony, in collaboration with the Knight Foundation and the M.I.T. Media Lab, asked Miamians to upload cherished Miami sight- and soundscapes. Then, over the summer, composer Ted Hearne and film-maker Jonathan David Kane will sift submissions for musical and cinematic motifs. The resulting symphony and film will premiere on Saturday, Oct. 21, 2017 at the New World Center, performed by the New World Symphony conducted by director, Michael Tilson Thomas. Project 305 elevates Miami’s music scene to the rank of cities like Toronto, Lucerne, Perth, and Beijing that have debuted their own cityscape symphonies.

Who are the Miamians actually making submissions?

Asking that question Artburstdropped in on St. Philips Episcopal Day School in Coral Gables on a bright Friday afternoon in March, where music teacher, Joy Lakin — seated at a grand piano with ukulele in hand — accompanied 20 third graders in the school’s chapel. Relaxed in dark blue sweater and black slacks, Lakin picks out scales with the instrument’s nasally twang as the children hum, “ahh, ahhh, ahhh, ahhh – oooh, oooh, oooh,” in harmonic progressions.

In a break between classes Lakin pulls out her iphone and shares the submissions the pre K4s (four year olds) worked up for the project.

“I’ve created samples to submit by making voice memos of the students on my phone. They used drums to improvise some rhythms and then we worked on creating melodies using xylophone.” From that Lakin had students create a series of 10-second compositions they rehearsed over several classes. “There is no set meter – the kids create the meter, then we decide on the melody as a group, and then we repeat it over and over,” Lakin added.

Asked whether she enjoyed teaching such young students composition, she corrected: “I just mimic back to them what they sing to solidify what they’ve done. They do all the composing.”

Back at a December meeting, Todd Machover of The M.I.T. Media Lab had emphasized the key role the Lab’s new software program, Hyperscore, played in encouraging sound submissions from children in other cities. According to Machover, Hyperscoremakes learning the elements of music composition easier since young people use colors and geometric shapes to compose instead of standard musical notation. Through Project 305Miami-Dade schools and youth organizations receive a free trial of the software through November 2017.

Though familiar with Hyperscore, Lakin in the end chose a different approach: “To really make use of the software a student has to sit in front of a monitor with headphones on as ifit were a video game. To make a calculated, conscious composition on it they would need to learn the program’s form of musical notation anyway. Writing notation is a visual art and not an aural art. Music done for its own sake, as these children do, is an aural art.”

Fresh from his first Youth Music Festival in Miami Beach, Sammy Gonzalez — president, CEO and co-founder of Young Musicians Unite (YMU) — only needed to extend invites to jam sessions to crank out contributions for the project. Since 2013 YMU has provided free in- and after-school music programs to schools in the Wynwood and Overtown areas. Speaking by phone, Gonzalez observed, “we are there to make sure that the kids are getting a consistently high level of music education and to create a pipeline so that the students can move between middle school and high school.”

The YMU program ensures that students learn the fundamentals of music including theory, reading, songwriting, competition and performance. Gonzalez recently had a bass player in his programs graduate from high school with a full ride scholarship to Berkeley School of the Arts.

When it came to putting something together for Project 305, Gonzalez explained, “I just grabbed students from the Jazz combo YMU has at Young Men’s Prep Academy. We then went to my recording studio where we partnered up with another non-profit, Guitars Over Guns. We recorded an entire song and submitted that.”

On another occasion, Gonzalez teamed up with Joy Lampkin, project manager for Project 305. “Joy brought in professional musicians who are all out there already on the Miami scene – some Spanish musicians, some Jazz musicians, some Haitian musicians, one had reggae influences, another Brazilian.”

These musicians had never met before, but, despite the diversity of their backgrounds, Gonzalez added: “We went to our instruments and we just jammed together – bass guitar, piano, percussion, two or three vocalists — and submitted that.”

Asked whether he saw an influence of Project 305on the Miami music scene, Gonzalez reflected: “I can only speak about how it has affected me. To take kids and put them in a recording studio for the first time and say to them ‘you are going to be representing Miami’ — it made us think about Miami and rack our brains about what we do and how we do it. Anything that showcases our diversity and musicians in Miami is awesome. You just can’t describe Miami music with one genre.”