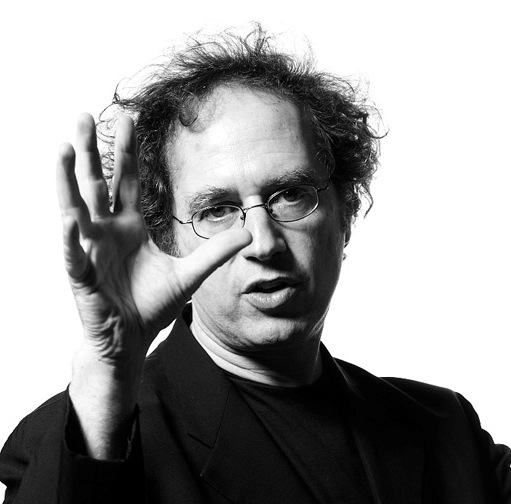 Sun-drenched it is, but Miami is sound-drenched as well. Parrots screech complaints from the Grove’s canopy of palms. I-95 is a perpetual sound lab of squeaking brakes, tires rubbing asphalt and the pulse of horns. On Coral Way, abuelaschat in melodic Spanglish about nietos as 747s rumble overhead.

Tod Machover – composer and Muriel R. Cooper Professor of Music and Media at the M.I.T. Media Lab – hears music in Miami’s noise and believes its soundscapes are ready to be sampled. With filmmaker David Kane, and representatives from New World Symphony and the Knight Foundation, Machover unveiled Project 305 at the New World Center on Miami Beach to a packed room of reporters, teachers, administrators and artists clutching coffees on an early Monday morning last December.

Looking the part of composer-technologist in black t-shirt, jacket and pants, Machover described Project 305 as a “crowd-sourced city symphony.” For 100 days from January 31to May 12, Miamians will be encouraged to record and submit on smartphone apps short audio files capturing the city’s sounds and images.

Then a team that includes Machover, composer Ted Hearne, Kane, and New World Symphony Artistic Director and co-founder Michael Tilson Thomas, will sift through the submissions. The goal is to gel them into a distinctively Miami symphony.

Similar projects by Machover in Lucerne, Switzerland; Toronto; Edinburgh; and Perth, Australia derived inspiration from cow bells on the sides of Alpine mountains, conductor’s whistles, footsteps on a bridge, ice cubes clinking in glasses, a butcher wielding a cleaver, the clink and hiss of an electric plant. Machover’s Symphony in D, described as “a cacophonous love letter to Detroit,” used over 15,000 sound bites.

Contributions from young people have a prominent role in the project. Machover highlighted the Media Lab’s Hyperscore software that makes music composition accessible to children. Using Hyperscore, students generate music not by writing notes on a staff but by drawing sounds using shapes and colors. He encouraged local schools to access the program, and added there are plans for making that software freely available to educational organizations during the project.

The time frame is compact — the final work will premiere Saturday, October 21, 2017 at the New World Center, with subsequent viewings taking place at partner venues in communities throughout Miami-Dade County.

Machover’s hope is that Project 305 will shape for Miami, as it has in other cities, a fresh, radical “musical ecology with new connections and new creative centers for Miami-based artists, musicians and writers.”

After the presentation, that ecology showed signs of life as many of the attendees networked, exchanging ideas. Ryon Coote, philanthropy director for McLamore Children’s Center, saw Project 305 as “the opportunity to get some exposure for our demographic” and was particularly interested in the compositional software for children.

Miami will be the first city to accompany its symphony with video and photographs. Ronald Baez, artistic director at the Coral Gables Art Cinema, heard in Machover’s presentation an opportunity for local film-makers to make use of the center’s equipment to generate contributions.

Submissions can be made from January 31 to May 12 by sending sound and video clips using the iPhone or Android app, project305.org.

New World will hold three public launch day events Jan. 31 throughout the city where the community is invited to come out and learn more about the project and how to start submitting their audio/visuals! Details below: