Preview: Buika on Her Music and Her Passion 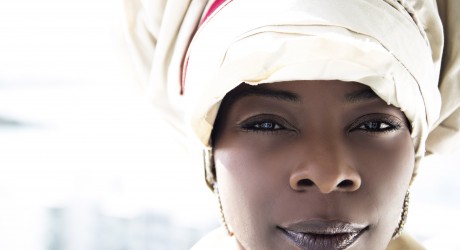 Miami has a new resident and her name is Concha Buika. The Grammy-award winning vocalist and Miami denizen returns to the Arsht Center for the Performing Arts on Sunday, Dec. 1 with songs from her new Grammy-nominated album La Noche Mas Larga. The album has five originals and covers by Jacques Brel, Billie Holiday, and a special appearance by Pat Metheny. Buika is the quintessential cosmopolitan in a globalized world and her genre-crossing, boundary-breaking music is the sonic passport to a transnational universe. During a telephone chat while the singer was in Brazil, I asked her why she had chosen Miami as her new dwelling and she exclaimed, “The answer to that would take one week, seven nights and seven bottles of wine… it’s a laundry list,  it’s too much! But the sun, the water, the people — Miami is a dreamland, a new beginning.” But, she adds, “My problem is that I have no identity. In Spain they tell me I’m a black girl. My African family says, ‘no, you’re a Spanish girl,’ so I’m kind of lost. I love Africa, I love Spain but Miami is a new place.” Born in Mallorca, Spain to parents from the African nation of Equatorial Guinea, Buika’s music embodies and internalizes centuries old traditions of oral storytelling, vocal improvisation and nuanced emotional dichotomies inherent in flamenco and West African music. Her work is often described as rooted in flamenco principles. I asked her if this is how she would describe herself. “The music business had to put me somewhere, and it was really hard.” She adds that “I am a new person, a new someone. I’m difficult to understand. Am I hip-hop, flamenco, a black singer? I agree with all of it because it’s all true. People need to do it to categorize me and it’s all good with me.” Buika’s music is synonymous and exemplifying of what Cuban scholar Fernando Ortiz coined as “transculturation,” which he defines as “a set of ongoing transmutations; it is full of creativity and never ceases; it is irreversible. It is always a process in which we give something in exchange for what we receive: the two parts of the equation end up being modified. From this process springs out a new reality, which is not a patchwork of features, but a new phenomenon, original and independent.” Her voice buttresses melodies with buttery richness, ecstatic pain and tenderness. There is always another influence, another ingredient. Her lyrics take you on an emotional journey that carries within its body the history of ancestors, migrations, sorrows, and the incandescence of love. In the 2005 recording of “New Afro Spanish Generation” she plants her flag and states “we all live in times of progress, we are the new Afro-Spanish collective.” In the same song she sings that “loneliness comes without a homeland.” Whether in her original songs or the covers she chooses, she works from a position of empowerment. I asked her about the song “Jodida Pero Contenta,” a veritable war cry of the broken hearted. “Even though men and women can feel the same thing, to me it’s a woman’s work to turn pain into something else” she says. “It’s the song that comes from a rough night.. it’s really big and tremendous! Jodida pero contenta! — it’s a phrase that women all over the world can feel sometimes.” It is easy to see Buika’s commitment to the transformation of emotion in her music. La Noche Mas Larga includes the Billie Holiday classic “Don’t Explain,” which Buika makes her own. “It’s a song about a man who treats her bad and it’s unacceptable!” Buika exclaims. “No way. We need to remember our histories as women. We are stronger today — not just to survive but to defend an idea. We have the capacity to have new ways, to create new things, new cities.  We don’t have to waste time in a stupid relationship that doesn’t go anywhere.” She shared a story about a conversation she had early on in her career with singer Chavela Vargas. “I called her because I had just moved to Madrid and I felt lonely. She said ‘oh dumb girl, don’t be an idiot — loneliness is a unique place in the world and it’s very important for a girl to be alone with herself and her own ideas.’” Buika’s vision for herself and her music is beyond labels and categorization. It’s not about blurring lines, rather re-imagining a world without them. Each note, each pause is an articulation of identity, and models a way of being in the modernized, globalized world that we live in. While she is playful and detached to the categories that society wants to put her in , she is ardently clear in her position. “There is no identity, no difference. I go to Japan, Israel, the U.S. where people are working hard and making an effort to go to a theater and see a show from someone in another language and from another place. And the feeling is, we know each other, we like each other, we love each other, but no one wants to say that.” Buika performs on Sunday, Dec. 1 at 8:00 p.m. at the Arsht Center for the Performing Arts, 1300 Biscayne Blvd., Miami; tickets range from $45 to $65; www.arshtcenter.org.

The free radio-style episodes tell a coming-of-age story about a young girl running away to escape her broken home.
Continue Reading

Renowned, Miami-based professional choral ensemble to open its 19th-anniversary season on Nov. 8 with a virtual program designed to be reassuring and reflective.
Continue Reading