Out in the Tropics With a Flamenco Flair 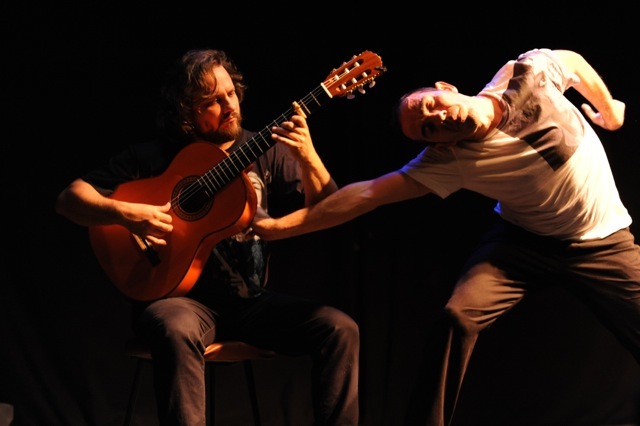 Whether it’s castanets, the polka-dot dresses or the dour faces as dancers stomp their feet, there are certain elements that have always been associated with flamenco dance and music. But flamenco is much more than that.

Flamenco is surprisingly rich, complex and varied,  especially in a contemporary context.

South Florida audiences will have the opportunity to discover as much when three Spanish artists bring to the United States for the first time their new piece, ToCaBa, during the fifth season of Out in the Tropics, an annual gay-and-lesbian-oriented performance festival presented by Miami’s FUNDarte.

“Without abandoning the essence of what flamenco is, ToCaBa takes flamenco’s traditional manifestations in dance, music and song, deconstructs them a bit, and presents a more revolutionary vision of this art form,” says Ever Chávez, executive director and founder of FUNDarte.

“It plays a bit with gender as well, and that’s why we decided to program it as part of Out in the Tropics, which features artists from the GLBTQ community, or works that have that sensibility,” says the Cuban producer and promoter.

Taking the first two letters of the Spanish verbs tocar (play), cantar (sing) and bailar (dance) to create the title, choreographer and dancer Juan Carlos Lérida, guitarist Raúl Cantizano and singer Francisco “Paco” Contreras, known as “el Niño de Elche,” give life to ToCaBa, which can also mean “it was about time.”

Indeed, it was about time for a piece like this to come to South Florida. And that happened in part thanks to Miami-based Cuban American flamenco artist Niurca Márquez (married to Spanish nu flamenco guitarist José Luis Rodríguez), who lived in Spain and knew Lérida’s work well, and recommended him to Chávez.

“Unfortunately, here in the States, we have not had access to a lot of artists who, for the past 15 to 20 years, have been breaking the traditional conventions of flamenco,” says Márquez. “There are time-honored codes in flamenco, and these are shattered in ToCaBa.”

ToCaBa, which was first presented last June in Paris, takes the preconceived notions of what the flamenco guitarist, the singer and the dancer are supposed to be doing while they perform, and transforms them, blurring the lines of what is considered feminine or masculine, traditional or subversive.

“The three of us have created this proposition that stems from the format of traditional flamenco,” says Lérida by phone from Seville, Spain. “With the flamenco guitar playing, singing, and dancing, its structure could be that of any flamenco tablao [a venue where flamenco is performed]. But we have been nourished by other trends.”

And these trends will change the manner in which ToCaBa’s artistic vision evolves on stage, possibly even clashing with the preconceived notions of some of those in the audience.

“What is certain is that, with flamenco, there is a strong connection to an aesthetic, perhaps due to some romantic idea of what Spanish culture is,” Lérida says. “There are certain aesthetics, which today, in contemporary art, are being questioned.”

A scholar — a thesis short of obtaining a doctorate in advanced flamenco studies from the University of Seville — Lérida emphasizes that he and his colleagues in ToCaBa are not trying to undo the legacy of flamenco. As a matter of fact, he adds, for him, this has been his basic dance language since he was three years old.

But that does not mean that he is stuck in the past. “The past is a reference,” says Lérida, who in August turns 43. “Yet I do not use it as a source of inspiration.” Inspiration that leads him to real improvisation, which is essential to the vibrancy and personal touch that performers must bring to flamenco. However, Lerida says, “I question the level of improvisation that has been ascribed to flamenco, because in flamenco there are a lot of rules.”

What there doesn’t seem to be in traditional flamenco is a lot of humor, and in ToCaBa, Lérida injects his own. “Behind the supposed tears in flamenco, there’s laughter hiding, or the other way around,” he says. “We are playing with the ambiguity of emotion.”

And the ambiguity of roles.

“This ambiguity is not something we are looking for in the same way we look for laughter and tears,” Lérida explains. “There are these set ways of moving the body that we associate with the man and with the woman. But the moment you step away from them, your perception changes. We all know that to move a hip or a hand in a certain way does not make you less of a man. My aesthetic belief, as well as Paco’s and Raúl’s, is that bodies can express themselves. Do these bodies break or question the feelings of identity? It is possible… What we are doing is shifting flamenco’s most basic identities.”

What: ToCaBa, part of the Out in the Tropics Festival