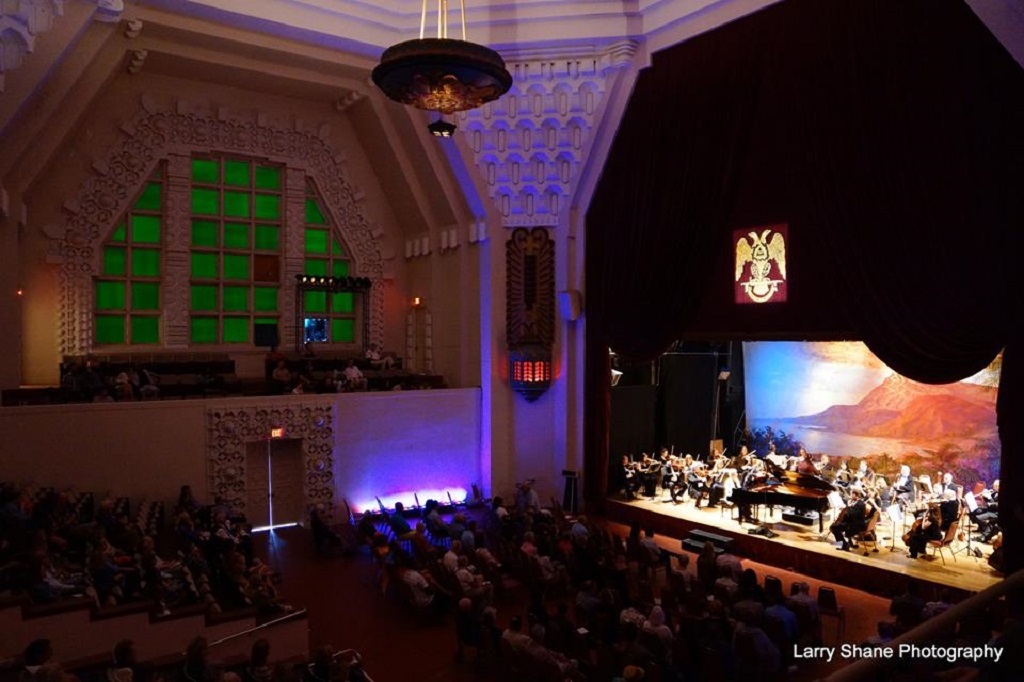 In the wake of the Harvey Weinstein affair and Black Lives Matter movement, producing an opera set in an all men’s club where the one dark-skinned character and the lead female character are banished in the final scene could set some heads shaking.

Instead of denying the national conversations on gender and race, Orchestra Miami’s production of Mozart’s “The Magic Flute” confronts them. With a new English translation by director David Grabarkewitz, the production forefronts themes present in the original opera that most contemporary productions miss when they flatten the work into a simple struggle of good against evil.

“’The Magic Flute’ is the ‘Hamilton’ of its generation,” Grabarkewitz explained during a rehearsal break. “This piece takes head on racism, slavery and misogyny in a direct way that should be admired. For instance, our current production directly addresses the issue of race, since we cast the roles with a blind eye.  Pamina is Korean, Sarastro Jamaican American. Monostatos and the Queen of the Night – both Hispanic.”

Grabarkewitz has been honing his new translation of “Flute” for over a decade.  “The script originated in 2005 for the New York City Opera education program,” he continued.  “I workshopped the script again in 2007 with [Orchestra Miami’s artistic director] Elaine Rinaldi for the international Intermezzo festival that took place that year north of Tampa.”

Bass-Baritone Neil Nelson, who performs the role of the high priest Sarastro, also finds the casting of the current production significant. “As a professional opera singer, most of the time I am the only black lead in the show. So, to see here, for instance Yunah Lee, who is Asian American, performing the part of Pamina – that it is definitely significant. Just as in other parts of society issues of race are getting more attention, so, too, in opera.  You can’t imagine how important Misty Copeland [the first African American promoted to principal dancer at American Ballet Theatre] has been for my eight-year-old daughter, who loves ballet.”

“We have to see things to know they are possible,” Nelson added. “When my daughter comes to see this opera, she’s not going to think twice about a black person being on an opera stage.”

Similarly, cast as the Queen of the Night, Miami native and soprano Melissa Ruiz found Grabarkewitz’s interpretation of her role refreshing. “Her actions make sense as a fight for gender equality. Think how forward thinking this would be for Mozart’s time, the late 1700s. David was clear that the conflict is not good versus evil but between men and women, between genders. The Queen of the Night is not evil. She’s angry.”

But this current production of “Flute” is notable for reasons beyond the culture wars. Take, for instance, the happy decision to perform Mozart’s “masonic opera,” where a temple figures prominently on stage, in an actual Masonic Temple.

On entering the Miami Scottish Rite Masonic Temple at NW 3rd Street in Miami during Wednesday rehearsals, visual cues immediately suggested a host of concealed meanings. Over the stage a two-headed eagle with the number 32 embossed on its chest perches on a sword above the Latin, spes mea in deo est (“my hope is in God”). Images of eagles, triangles, globes and the number 32 repeat throughout the hall.

As Orchestra Miami founder and conductor Rinaldi explains: “Masons progress through 32 degrees and there is a ceremony to advance to the next degree, so there is a theatrical element to their ceremonies. In fact we are using the backdrops and the props they use [for those ceremonies] in this production.”

And freemason symbols abound in the opera. “The number three is important to freemasons, and this number shows up theatrically and musically throughout the opera,” Rinaldi continued. “For instance, three ladies save the hero, prince Tamino, from a snake at the opening. Written in E-flat major (a key signature with three flats) the overture begins with three chords that represent an initiate ritually knocking on the door of the temple. Mozart has triplets mark the moment of entering the temple. The opera is full of similar references to the freemason tradition.”

Still, Chicago-native and tenor Gregory Schmidt cautions us not to forget that with all the mysticism, double meanings and culture politics in the opera, the “number one selling point is the music because, of course, it’s Mozart. No matter what else is going on it’s glorious music. I’m always reminded to just sit there and let that incredible sound wash over me. And what a privilege it is to just be a part of it.”

Info: Cost at the door $25-$65; For tickets and info, www.orchestramiami.org.