The African Heritage Cultural Arts Center, one of this area’s premier arts training institutions, will kick off Black History Month with a celebration of African-American spirituals presented by local opera singers.

The “Art of a Spiritual” concert will take place at 7 p.m. Feb. 1 in Miami’s Sandrell Rivers Theater.

Among the singers is baritone Angel Refusé, the Miami Northwestern Senior High graduate who trained at the Boston Conservatory at Berklee and at the African Heritage Cultural Arts Center. This concert was his idea.

“One of the things that is most exciting is exposing people to the art form,” he said.

Though some may think of spirituals as gospel music, spirituals are older by six to eight decades, he said.

And the depth of spirituals may be surprising. The songs, technically complex, are religious on the surface, but they were also used to protest the living conditions of those who first composed them: enslaved people.

Spirituals served as coded messages for those seeking to escape bondage. Notable examples are “Go Down, Moses,” “Wade in the Water,” and “Swing Low, Sweet Chariot.”

But there’s even more to them, Refusé explained. He tells a story of American composer Jester Hairston working with a group of singers on his spiritual, “Amen,” about the life of Jesus Christ. When the singers began to clap on the first measure, Hairston stopped them, according to Refusé, and instructed that they should clap only for the risen Lord, much further down in the song.

“That’s the kind of work the spiritual demands,” Refusé said. “Give it its respect.”

Refusé has long been driven by his passion for music, according to Isis Roberts, director of the music department at the cultural arts center.

Pursuing such a passion is not without challenges, especially for a young Afro-Latinx man in the classical arena, she said.

“However, he never let the naysayers distract him,” said Roberts, adding that he continues to educate himself as well as younger artists while serving as an example of what dedication and hard work can bring. 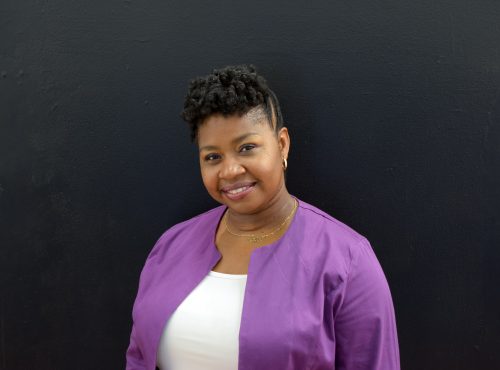 Isis Roberts, director of the music department at the cultural arts center, also will perform in the concert. (Photo courtesy of African Heritage Cultural Arts Center)

Roberts, a mezzo soprano, will perform in the concert as well, in addition to sopranos Erica Williams and Kyaunnee Richardson. Karl Van Richards will accompany them on piano.

Richardson sang for President Barack Obama and others at the funeral of the Rev. Clementa Pinckney, who was killed in the 2015 mass shooting at a church in Charleston, S.C.

Also performing in “Art of a Spiritual” is the center’s Voices of Heritage ensemble, to which Refusé once belonged. This group consists of 9- to 16-year-olds who are studying classical, jazz, R&B, folk and ethnic and gospel music in preparation for becoming professional vocalists.

Refusé said he considers the Black History Month performance a celebration not only of the music but of its composers, those who came before.

In his opinion, “the best reparation we can give our ancestors is to venerate them properly. Give their literature the time of day. Take it seriously and give it everything you’ve got.”

What: “Art of a Spiritual”