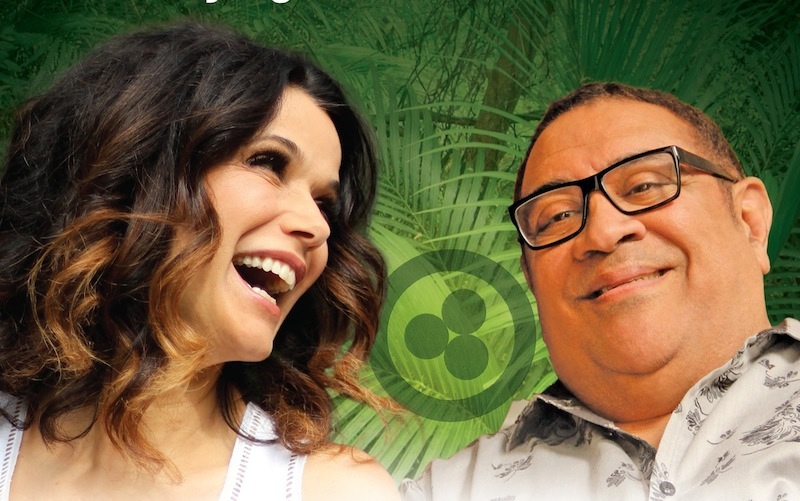 Puerto Rican percussionist Sammy Figueroa is one of the hidden gems of South Florida.

Unassuming and with a puckish sense of humor, Figueroa is a versatile, resourceful player whose extraordinary career includes performing, recording, and touring with a dizzying list of jazz, pop and rock stars and groups, including trumpeter Miles Davis, saxophonist Sonny Rollins (his current employer) and the Brecker Brothers; but also David Bowie, David Lee Roth, Ruben Blades, Annie Lennox, and Mariah Carey. In 2001, Figueroa quietly settled in South Florida. He organized a band, when in town he played at places such the defunct Van Dyke on Lincoln Road and recorded three albums that garnered him two Grammy nominations. He now also has his own “The Sammy Figueroa Show” every Monday morning on Miami’s WDNA 88.9 FM.

And Figueroa is also an irrepressible storyteller. He doesn’t just answer questions, he playacts entire scenes, bringing to life characters and situations with the timing of a comedian.

Here is a (very) abridged version of a conversation at his Miami Beach home, in which he discusses his beginnings in music as a salsa singer, Miles and his latest project, Talisman, a set of original music recorded in Sao Paulo with Brazilian singer Glaucia Nasser. Backed by a Brazilian quintet featuring the musicians on the recording, including the young pandeiro master Bernardo Aguiar, they will be presenting the album at the University of Miami Gusman Concert Hall as part of  Festival Miami, Oct. 18 at 8:00 p.m.

You have spoken about first hearing jazz when you were 15. What were the circumstances?

Very simple: I lived an isolated life, I didn’t go out, I didn’t play with other kids, I had a big afro, was very skinny and they used to kick my ass at school. So I stayed home and discovered jazz. The first record was Clare Fischer and his big band, and I thought it was amazing. Then I heard Sam Cooke, Herbie Hancock — and then I heard Miles and I thought “Oh yeah, I’m in.”

The little money I made doing some horrible gig, I’d spend it on records. I wasn’t paying rent. So I locked myself in the room and listen to this stuff until three in the morning. My mother would bang on the door for me to go to bed. After listening to Clare Fischer, Herbie, Chick, all those guys, when The Beatles came out with “I Want To Hold Your Hand” it wasn’t that impressive.

Were you playing percussion at the time?

No, I wasn’t playing at all. I was singing with a quartet. I was doing gigs as a singer in hotels. And then Bobby Valentin, the great salsa bass player, heard me and said, “You sing pretty good. Do you ever sing salsa?” “Nah, not really.” “Why don’t you audition for me next week?” And I did. I went home and listened to Joe Cuba and started imitating Cheo Feliciano and went back to Bobby and told him “okay, I got it.” So he auditioned me. The band starts playing, I start improvising and he goes “Damn, you are really good!”

So I joined the band and for five years I was the lead singer for Bobby Valentin.  I didn’t play percussion, I was a salsa singer.

The congas came later. While I was with Bobby, Fania [the Motown of salsa] offered me a contract — and my mother went completely crazy. She said “What!? You are not going to do what your father did and blah, blah, blah.” My father was a singer and had died an alcoholic. And I’m glad she did stop me because then I turned to percussion. Nobody would teach me so I started practicing with a broken conga that my neighbor had. I had to learn by myself, invent my own exercises. But I did a little gig with Perico Ortiz, the great trumpeter and arranger, and … I became Perico’s percussionist for four years. He got me into the instrumental thing.

Pick three artist you liked to work with the most.

On the road I loved working with the Brecker Brothers. I liked working with Miles. It was so much fun. It was so unpredictable. He was out of his mind — but that was what made it interesting to me, and we became very close friends. And, of course, I love Sonny Rollins. He’s unpredictable. I should also mention David Bowie and [Brazilian pianist] Tania Maria. Tania took me places that never, in my wildest dreams I thought I would go.

We could spend days on Miles — he lived in my apartment for almost a year and also almost burned it down cooking, but let me just tell you how we met.

I didn’t know Miles. I only knew him by his records. By the time I joined Miles [in 1980] I was a household name in New York. I had already done 50-something records and I was a well-known studio guy.

So I was in my little apartment in New York, with my then wife, I was already in bed, I had came back from a session late and my phone rings at about 2:15 in the morning. I pick it up and I hear (imitating Miles’s rasp) “Hey man, what’s happenin’ motherf#@^&*” and I go “Click” and hang up. Who calls at that time? I thought he was [trumpeter] Lew Soloff, my closest friend. He would be the one to do a stupid thing like that.

Then the phone rings again. “Thank you for hanging up mother%$#” and I go “Who is this?!” “It’s Miles Davis” And I say, “Oh yeah, sure, Miles Davis,” and hung up. And then the phone rings again and I hear this other voice, “Is this Sammy Figueroa? This is [Miles’ producer] Teo Macero.” Now my eyes are wide open … “You just hang up on Miles — twice. I’ll take care of him. But if you want the gig get your ass over here. Now!” So I took a cab to the old Columbia Records studios and I walked in and saw this really black guy, I mean blacker than coal. He’s sitting in a chair just looking at me, and I say “Miles, I’m so sorry I didn’t know” and without saying a word, he got up and punched me in the stomach!

He punched me so hard that I fell on the floor. I couldn’t breathe. And I’m thinking “I got up at 2:30 in the morning to get punched in the stomach??” So I just reacted and I hit him. I hit him so hard he fell over the piano and I broke his lip. I saw this little thing falling, going over the piano like a crow. And Teo comes out the booth: “What the fuck happened here??!!” I’m looking at Miles and apologizing “I’m sorry Miles,” and he looks at the blood from his lip and says “”Damn, that’s a good right hook mother#@^%” And that was that.

That night [in June, 1980] we recorded “Man With the Horn.” The rest of the album we did over the next four days.

How did you approach your work in Talisman? This is not a straight up Brazilian record. The grooves are Brazilian, obviously, but one can also hear Puerto Rican bomba, Afro-Uruguayan candombe, mambo rhythms even African grooves. What was the plan?

What I played in Talisman is part Brazilian and part Latin because I didn’t want to interfere with what they guys were doing. We had with us Bernardo Aguiar and he’s wonderful. So I wanted the guys to play the authentic stuff and I’d play bomba and plena or really fast mambos for example — and it worked perfectly. If I had played Brazilian conga, which now I know how to play, it would’ve been too Brazilian. Then it wouldn’t have anything to do with what I wanted to do, which was to bring the two approaches together.

When you are mixing different styles you have to know where and when to put them. It’s like a chef. If you put too much condiment you overpower the natural flavor of the food. You need to put the right amount and keep it simple.