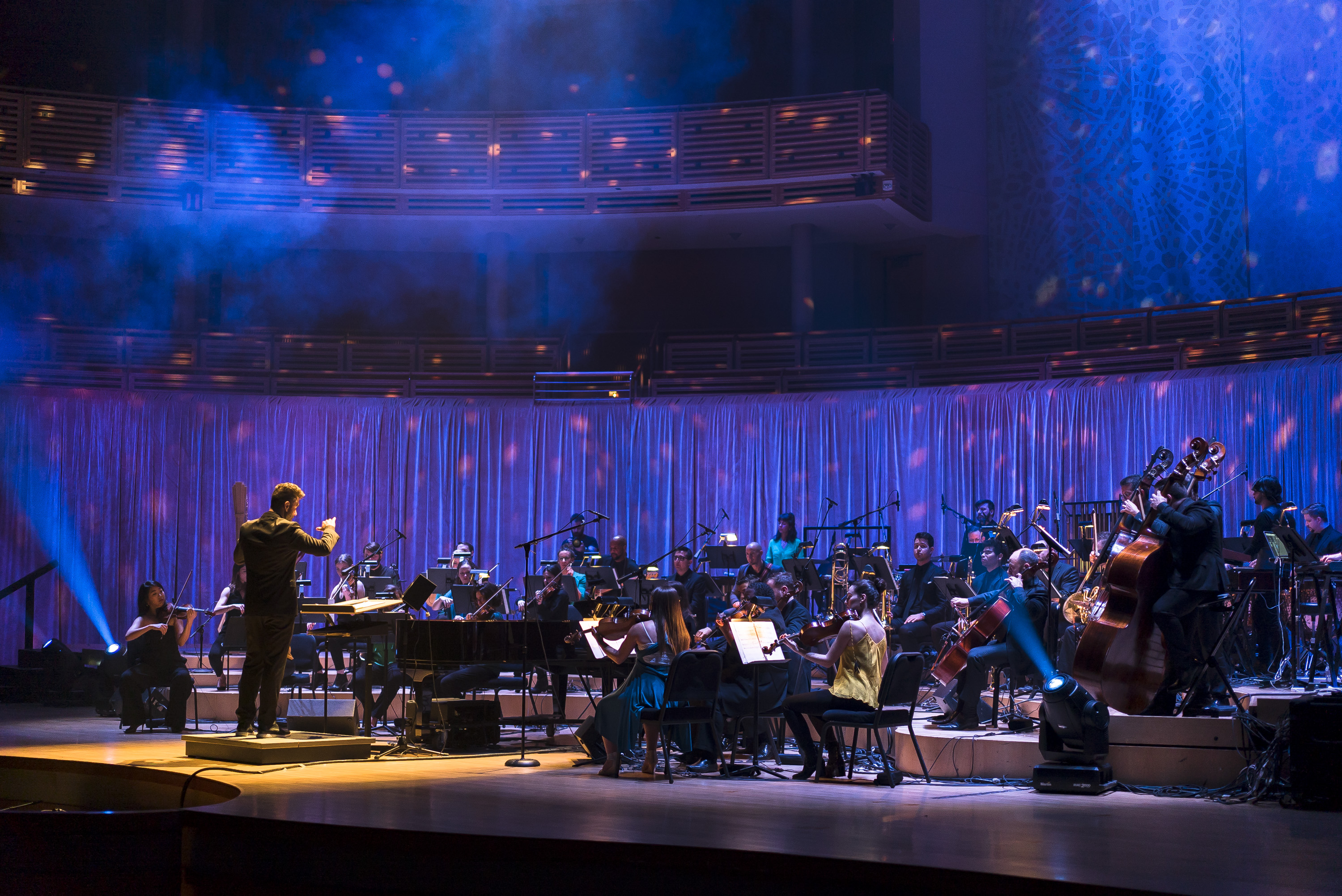 Whenever the Nu Deco Ensemble puts on a show, it’s extraordinary. After all, the genre-busting, hybrid orchestra has collaborated onstage in the past with artists including Wyclef Jean, Ben Folds, Macy Gray and Stephen Marley.

Its latest show is no exception. On Nov. 9, Nu Deco will perform at the North Beach Bandshell with Afro Cuban superstar Cimafunk, named by Billboard as one of “10 Latin Artists to Watch in 2019,” who will bring his dazzling style and high-energy sound to the stage.

“They’re calling Cimafunk the ‘James Brown of Cuba,’” says Sam Hyken, co-founder, composer and artistic director of the ensemble along with partner Jacomo Bairos. “He’s the complete package – amazing dancer, amazing singer, really fun music. Generally, when we’re at the Bandshell, in the spirit of that venue and the fact that the Rhythm Foundation is running it and that they are musical leaders in Miami as far as presenting world music, that’s the vibe we like to go for.”

Cimafunk, who will close the show, is far from the only highlight of the evening. The program also will feature original music by several ensemble members, kicking off with violist Jessica Meyer’s piece “Go Big or Go Home,” followed by works from Miami jazz-rock fusion band Electric Kif and Nu Deco guitarist Aaron Lebos.

“The night’s theme is really a celebration of our ensemble,” Hyken says. “Every single piece we’re performing at the concert is done or rearranged by a member of the ensemble.”

The program also will represent the musical eclecticism that’s inherent in Nu Deco’s mission. After the members’ showcase comes a collection of songs by the Grammy-winning French electronic duo Daft Punk, which is known for the dance hits “One More Time” and “Get Lucky.” The piece is put together by Hyken and is titled “Robots vs. Humans.”

“This particular suite comes from Daft Punk’s latest album, ‘Random Access Memories,’ which used a lot of acoustic instruments, so we’re not using samples or a deejay or anything of that nature in the work,” Hyken says. “We take ‘Get Lucky’ and put it into a solo cello line, and do an orchestrated version of ‘Giorgio by Moroder,’ and that’s really one of the more electronic pieces on that album. And then we do ‘Contact’ from that album.”

Fans of Nu Deco might notice that the next offering, an ode to R&B and soul legend Bill Withers – known for the timeless hits “Use Me,” “Ain’t No Sunshine,” “Lovely Day” and “Lean On Me” – was performed at the Adrienne Arsht Center for the Performing Arts in April.

“At the Bandshell, we like to do some of our hits,” Hyken says. “As an orchestra, we’re always presenting a new program, but when we get to do a venue like the Bandshell in a neighborhood we’re in only once a year, we like to bring back some of the pieces that we play in our other programs. This is called ‘A Bit of Bill,’ and it’s like an overture to Bill Withers. I imagine that’s the piece, if there’s ever a movie about Bill Withers, it’d be the opening overture for.”

Hyken also is excited to present music from the Nu Deco Ensemble’s debut album, which drops the same day as the concert, and whose eight tracks run just under an hour. And, yes, its musical spectrum is quite broad.

“The album is really a great representation of who Nu Deco is,” he says. “It’s got living composers such as Nicholas Omiociolli – we’re doing a work of his that we love to play called ‘Fuse’ – and we’re also doing a work by Andy Akiho on the album called ‘Karakurenai,’ which is more of a chamber work. And then we do collaborations. We have two songs with [the album’s producer] Kishi Bashi, a song with Danay Suarez, and a song with Spam Allstars. And then we have suites of music featuring Outkast and Daft Punk.

“The only aspect that’s not on there are the classical reimaginations that we do,” he continues. “One of our rules, as an ensemble and as an organization, is that if we’re going to perform music that’s from before the 20th century, it’s going to be reimagined. So we do reimaginations of Bach and Bizet and Vivaldi, etc. And later this year at the Arsht Center, we’re doing a reimagination of Tchaikovsky’s ‘Nutcracker.’”

This is Nu Deco Ensemble’s fifth season, but its musical vision has stayed consistent.

“It hasn’t really changed,” Hyken says. “I think it’s evolved in the sense that when Nu Deco started, it was really a group of classical players who were playing multi-genres of music. Now it’s evolved into a hybrid ensemble full of some of the top classical players mixed with some of the top contemporary players. And I think that has given us the most flexibility in the music we make.”

It’s that versatility and commitment to creative inspiration that make top contemporary artists want to work with the ensemble.

“What we try to do is elevate any sort of music,” Hyken says. “So any time we put our show behind someone’s music, we try to make it something that’s a new take, something to make everything feel grander and add a new life to it. We’re really strong about the fact that Nu Deco is a collaborative partner when we work with these artists, not really a backup band. We want to bring a new element, something fresh, something relevant, that the music’s never seen before.”