No Longer for Parrots, Pinecrest is Now Known for Winter Jazz Series 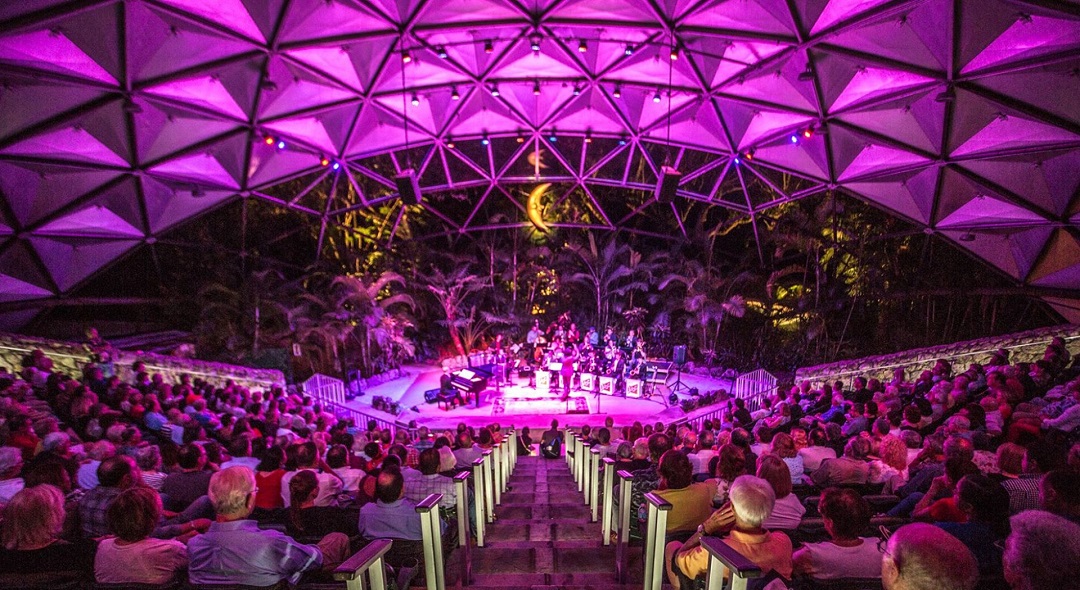 In days of yore, when the place was Parrot Jungle, people came to see the birds, monkeys and a bicycle-riding macaw. Now audiences come to Pinecrest Gardens to see a variety of noted musicians in the South Motors Jazz Series.

Randy Brecker played the first concert on Oct. 20.  Monthly through April there will be shows by stars including Christian McBride, David Sanborn and the Glenn Miller Orchestra.

Parrot Jungle opened in 1936. For decades visitors strolled its leafy paths and had their pictures taken with brightly colored birds perched on their arms and heads. The attraction moved north to more spacious quarters, reopening on Watson Island off Miami in 2003. The Village of Pinecrest bought the old site, which was added to the National Register of Historic Places in 2011.

After a study indicated the old Bird Bowl, where Pinky the macaw rode a bicycle on a high wire, had a future as a performance venue, gardens director Alana Perez said she chose jazz as a mainstay because of its wide audience appeal. The space was renovated, renamed the Banyan Bowl, and hosted its first jazz concert in 2011.

The 2018-19 series continues the mix of performers used previously.

“We like to include a singer, a brass instrumentalist, great piano … we always have Latin Jazz and a Brazilian artist as well,” Perez said via email. “This year is a particularly strong lineup, with a lot of Grammy award-winning artists.”

The trumpeter Brecker opened the series with the South Florida Jazz Orchestra. He has won six Grammys and been nominated 18 times.  “Together,” an album he recorded with Swedish composer-arranger Mats Holmquist and Finland’s UMO Jazz Orchestra, is climbing the JazzWeek chart. SFJO’s latest, a  recording of the music of South Florida saxophonist, composer and arranger Gary Lindsay, is on the chart as well.

November features the saxophonist David Sanborn, who has played with artists ranging from Bob James to Steely Dan to David Bowie to Branford Marsalis. A multi-Grammy winner, his discography stretches back to the 1960s.

The Glenn Miller Orchestra takes the stage in January. This big band, founded in the Swing Era a couple of years after Parrot Jungle, has played on and on after its leader was lost on a flight over the English Channel during World War II.

John Daversa, chair of studio music and jazz at the University of Miami, brings its Frost Concert Jazz Band and singer Renee Olstead to the gardens in February. In 2016, Daversa was nominated for a Grammy for Best Arrangement, Instrumentals and Vocals, for “Do You Want to Know a Secret.” Olstead sang it on his album “Kaleidoscope Eyes: Music of the Beatles.”

Paquito d’Rivera plays the series finale in April. The National Endowment for the Arts named this saxophonist, clarinetist, flutist and composer a Jazz Master in 2005. He has won five Grammys in 15 nominations – the first in 1979 as part of Cuban supergroup Irakere. He was also  a founding member of Dizzy Gillespie’s United Nation Orchestra.

In addition to the music, a two-course pre-concert meal is available by reservation in the gardens’ Cypress Hall.

There’s an educational component to the series as well, serving students from the New World School of the Arts in Miami. “The NWSA Jazz students are fortunate to receive instruction from some of the leading jazz legends of the world,” faculty member Jim Gasior said.

The South Motors Jazz at Pinecrest Gardens happens monthly through April 6 in the Banyan Bowl, 11000 Red Rd., Pinecrest. Individual concerts are $35 and $40 in advance, more on show day. Tickets are available online at https://tickets.completeticketsolutions.com/PCG/Online/default.asp or by phone: 877 496-8499.