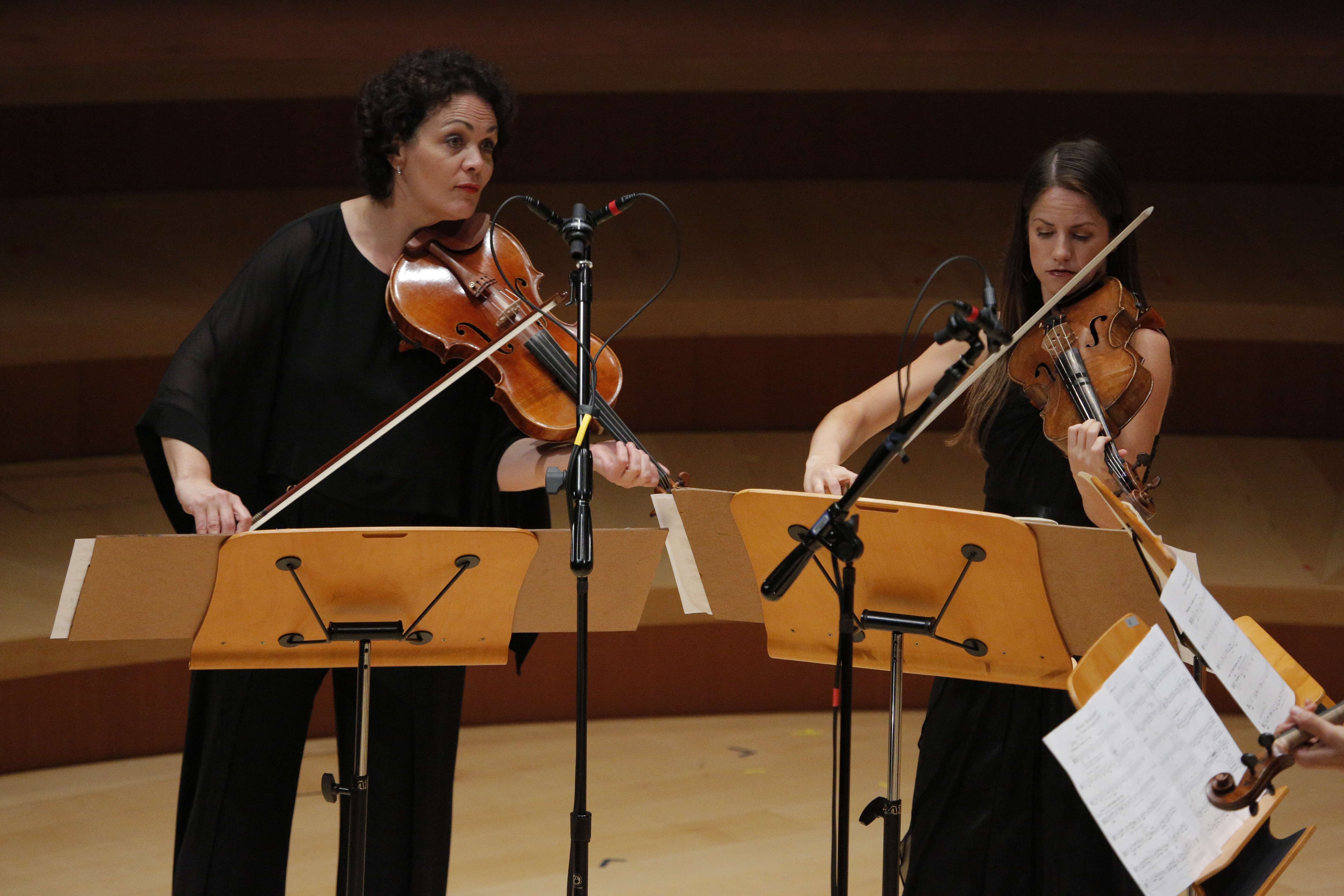 Wednesday October 16th at 8pm at the New World Center in Miami Beach opened the first of four nights of the New World Symphony’s” Viola Visions Festival: Three Centuries and Counting.” The program featured viola-centric works spanning three hundred years in an evening that leapt from one surprise to the next while meaningfully integrating community outreach and educational elements.

Scored for over thirty violists, the NWS world premiere of Bultmann’s “Concerto4 for Large Viola Ensemble” could not have been performed without these young musicians.

And “Concerto4” was an extraordinary nine minute work that compressed conflicting themes and techniques around a gorgeous folk melody initiated by Bultmann then passed between the soloists. The younger musicians laid down a sure, constant floor of chords from which intense pizzicato rhythms flashed, dominated, then whispered underneath. The work’s dynamics were elastic, alternately expanding before turning inward, repeatedly pitting the folk theme against constantly changing plucked rhythms. Much happened in this dense, concise, gorgeous piece. 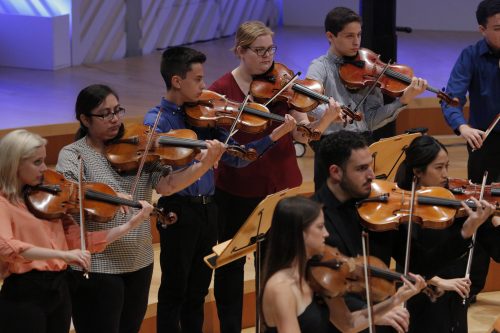 The lead violas announced the fugal phrases with a crisp energy softly accented by the viola da gambas and bass which at times sprang out with rarely heard personality. In the Adagio Phelps laid down the bright, plaintive theme but notable, too, was Ohkubo whose expansive cello line went beyond support and revealed an unexpected dimension within the movement. During the closing Allegro Vinocour and Phelps traded the melody like close, witty friends preferring to bubble with humor than pause for a laugh. The gigue barreled to a close, peppered by accents, controlled but danceable.

Zimmerman lavished the work with nuance and subtlety presenting jaw-dropping possibilities for the instrument. At times courtly, at others spidery, the eleven minute piece shifted from the third variation’s delicate phrasing where the performers whispered the bow across the strings like fingers on glass to the out of tune and drunken variations where Zimmerman went so far it was hard to know how the other performers kept from cracking a smile.

The evening closed with Andrew Norman’s, “Gran Turismo for Eight Virtuoso Violas”, composed in 2004 for violin but arranged for viola for this festival.

“Gran Turismo” is a compressed eight minute work. In terms of pace it recalls John Adams’ 1986 “Short Ride in a Fast Machine” but instead of the built-in narrative posed by traveling in a real vehicle, “Gran Turismo” reflects the “0 to 200 back to 0 then float left” virtual disconnects contained in a completely digital experience.

Norman acknowledged the video game as partial inspiration for the piece. Assuming he was absorbing the 2000-2001 release of Gran Turismo 3, certainly his work shares its pace with the video game’s soundtrack.

But that was all he took from it, since not only is “Gran Turismo” out of the gate with respect to tempo. It is also out of the box structurally. With tempo markings that read “floor it” recordings of the work often capture the score’s kinetic energy but frequently mash the voices together, all complexity vanishing in the process.

The NWS performance took the tempo back a notch. This revealed “Gran Turismo’s” architecture while dialing down its shrillness. The eight performers hurtled through furious exchanges that suddenly collapsed around a single held note. About a third in, the piece shifted into dreamy and atmospheric before ramping back up. This was definitely a work to hear live, and podcaster and soloist Nadia Sirota and NWS Fellows Sharp, Parce, Rynearson, Qi, Ingersoll, Fellows and Simpson kept it out of the pit.

The Viola Visions Festival continues with Friday and Saturday performances. For schedule and tickets visit https://www.nws.edu/events-tickets/concerts/