New World Symphony’s 30th Anniversary: Outside In and Back Out Again 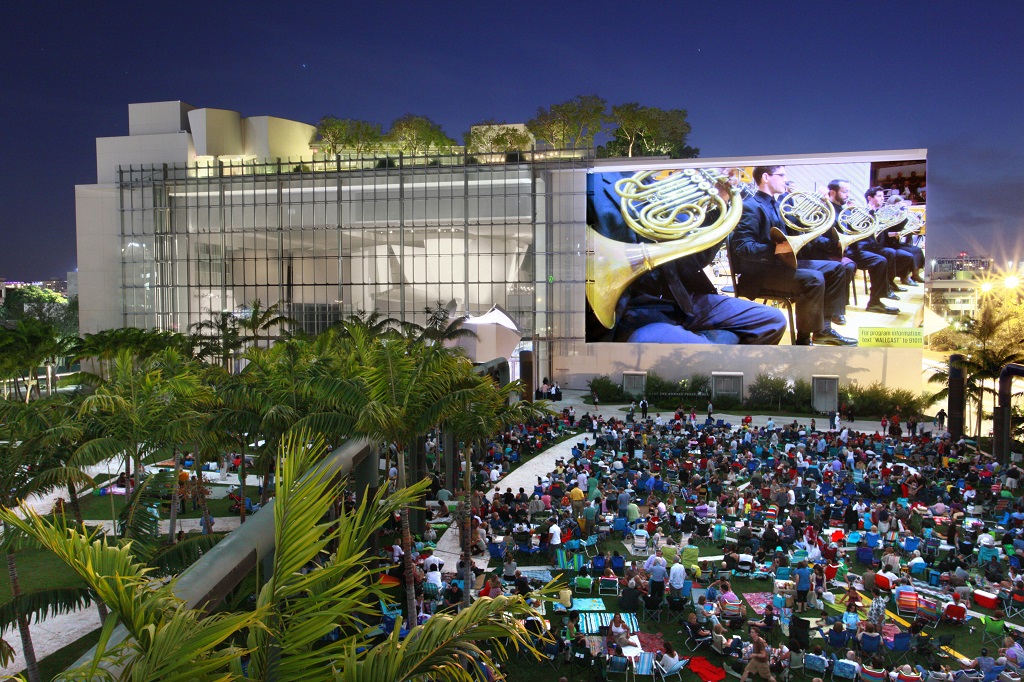 As the New World Symphony Orchestra (NWS) – Miami’s premiere symphony orchestra – celebrates its 30th anniversary this year, think of the

Doppler effect. It describes how sound changes pitch relative to the listener’s position. And sound itself also travels far.

Interviewing former NWS fellows, one quickly learns that NWS not only changed Miami’s music scene, it transformed the performance of classical music nationwide. NWS did this by acting for three decades as a cross between a think tank, research center and business incubator.

From the outside the orchestra mission looks straightforward — to mold graduates of elite conservatories and university music programs into the ultimate orchestra players while also fielding a world-class performing ensemble.

What happens on the inside is another matter.

As Marc Damoulakis, principal percussionist of the Cleveland Orchestra and a New World fellow from 1999-2003, explained by phone: “New World [grooms] people a way to be in the music world — it’s not about being timid.  Individuality and creativity and soloist qualities are valued on all levels of the institution.”

Fellows join the orchestra for terms of three years with an occasional fourth.  Most are already technical whizzes and strong musicians who then are taught as fellows how to converse with the public, meld into an ensemble, speak to journalists, generate interesting programming ideas, schmooze with donors and teach.

Damoulakis also emphasized the importance of founder, conductor and artistic director, Michael Tilson Thomas and his impact on the contemporary classical music scene. “Before NWS nothing existed like it,” he says. “Michael Tilson Thomas was here rehearsing in Cleveland last week and there were 10 of us in the Cleveland Orchestra that had gone through New World. And that number is higher in some places.”

“New World is unique,” continues Damoulakis. “There is not a single concert programmed because they need an audience. Of course there would be no concert without an audience, but the season programming is not set with solely the survival of the orchestra in mind.”

And for Damoulakis the institution’s progressiveness as a whole is a reflection of its leader. “There are really no other places like New World and it has a lot to do with Michael Tilson Thomas, who is ever pushing the envelope. He’s the hardest working man in show business.”

Speaking by phone, Teddy Abrams, music director of the Louisville Orchestra and NWS conducting fellow and assistant conductor from 2008 to 2011, says that “some of the people who play music and have incredible sounds are not some of the people who know how to be engaged with audiences in a way that is special and unique to them.”

For Abrams, New World teaches musicians to think big. “NWS showcases that the world of music stretches far beyond the basic requirements of whatever your specific job is. It says, ‘let’s think about the big picture and think about what we contribute to that.’”

Part of what makes NWS special is its genius for community building, thinks Abrams. It does this by side-stepping classical music’s typical ivory tower atmosphere. At the New World Symphony Center audiences view free simulcast performances from Soundscape park. NWS even premiered a new symphony, “Miami in Movements,” in October inspired by sounds and images crowd sourced from the iPhones of Miamians.

“The audiences of the future are right there, in the community,” says Abrams. “You want them to have a relationship to you as the people making the music. You want them actually connecting to the music, not just listening to it, but involved with it and making it. New World thrives on that dynamic between the people and the audience.”

This explains why Abrams was so quick to found Louisville’s innovative “Landfill Orchestra” program that offers children in area schools a music education that starts by having them make and play their own instruments – out of garbage.

But for Abrams, NWS’s greatest impact lies in how it acts as a kind of crucible for generating new directions for the music industry as a whole. “What they provide as a research and development engine is critical to the classical music world. The way they relate to the entire industry and the genre is unique. It is going to provide options for the future for us.”

That future may involve making directors of orchestras stars in their own PBS series as Abrams was in the 2015 PBS series, Music Makes a City Now, which documented his first year with the Louisville Orchestra.

And it may involve creating new spaces for classical music altogether outside the narrow confines of the professional classical musician as it did for Katie Wyatt, a former viola fellow with NWS who now serves as executive director of El Sistema USA, a national program using music to further social equity.

Recently El Sistema made news with the passing of its famous founder, Venezuelan conductor Antonio Abreu, who founded El Sistema in 1975 to bring music instruction to economically disadvantaged youth in Venezuela.  Today the program has grown to over 400 programs worldwide.

When asked what impelled her to devote her energies to expanding the availability of El Sistema after New World, Wyatt explained that “when I was at New World, for one program Michael Tilson Thomas engaged in a major project unearthing and playing pieces by Tomashevsky and Zemlinsky. These were Jews persecuted during the holocaust, and it was music by them that Tilson Thomas had uncovered. The pieces may even have been written while the composers were in concentration camps. We played them paired with Messaien’s ‘Quartet for the End of Time.’”

This experience functioned like an epiphany for Wyatt. “Our work on those pieces taught me that even in the face of disaster music is the last thing to go. Even in emaciated death-camp conditions, people have to express themselves.

“My time at New World really encouraged and prepared me to think outside the box,” continues Wyatt, “and to think about how success is a combination of how preparation meets opportunity. The New World Fellowship encouraged you to think about your career as a musician in both traditional and non-traditional ways. Nearly as many NWS fellows pursue entrepreneurial careers as a result of their training as pursue traditional careers,” she added.

Wyatt then outlined a vision of the transformative potential music holds for communities that both Abrams and Damoulakis had echoed during their interviews. “Music is for social justice and social change and freedom of expression. It is about an agreement on how we want to better ourselves as a human race and a people. Music is that place of expression where we can all come together and agree to move this idea forward.